I can almost guarantee that all of you are familiar with Krampus by now. This evil, half-goat version of Santa Claus has become extremely popular over the last few years, and with the release of Michael Dougherty’s film, Krampus, there isn’t a doubt that most of the North American population will be on a first-name basis with the Bavarian demon of legend.

What you may not know is Krampus isn’t the only creature looking to wreak some wintry havoc, there are a few others I’ve found with similar ideals. Don’t get me wrong, I love Krampus, but he is getting all the limelight right now. Let’s take a look at some other demons of Christmas. 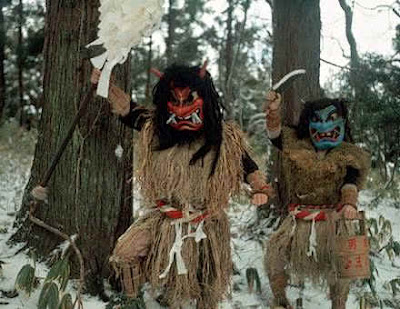 Namahage
It isn’t surprising to see Japan at the top of the list, as their folktales are equal if not more terrifying than the Germans’. Namahage are demonic ogres that dwell high up in the mountains—how they have come to live there varies by region. All year long they watch each household in the village and monitor the children’s’ behavior, keeping notes in a little book.
These demons descend from their mountain homes not at Christmas, but on New Year’s Eve, where they stomp through the town in pairs toting knives and wooden pail. The Namahage have bright red or green skin and horrible twisted faces with protruding teeth and they wear traditional straw capes. They visit each house (except for those that have experienced death or illness in the past year) and pound on the door and tear through the house shouting as they “interview” the head of the household. The family must have food and saki prepared to serve to the monsters. The man of the house is questioned about the behavior of the children, and if they have been naughty, the Namahage tell them that they must take them away and begin to chase them around the house. The father then pleads with the monsters to let the children stay, and the little ones (who have probably all wet their pants by now) must promise to do better next year.
This tradition is till acted out throughout Japan, but most famously in the town of Oga. They have a festival each year where men dress up as Namahage and beat drums and, naturally, terrorize children. 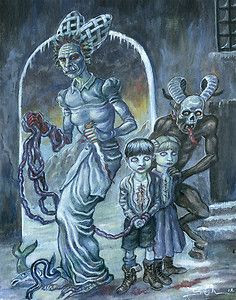 Perchta
This particular character in folklore goes by many names, and her stories vary vastly through regions and time. Rather than try and go into all of it and end up talking about things I don’t really know about, I’m going to stick to one version of the tale, which would, naturally, be the one that relates to Christmas.
In Bavaria and Austria, Perchta is a woodland deity who comes out of her forest seclusion to enter the villages on the Twelve Nights of Christmas, and visit the houses to check on the children’s behavior. She can either appear as a beautiful woman robed in white, or an ugly old woman. Since this goddess was also believed to have overseen the spinning of flax, she was especially interested in the young girls of the house, checking to make sure they have spun their fair amount of wool and flax that year. If they had, they would receive a silver coin and be left in peace, if not—well, they were getting a lot more than spanking. Perchta would cut open the bad children’s bellies and rip out all of their intestines, replacing them with straw and rocks.
There was, at one point in time, a cult who honored Perchta, and would leave offerings of food and drink out in hopes of wealth and prosperity. In the midwinter festivals in Austria, people dress in horrifying animalistic masks with horns and fangs, and are called the “Perchten”, and are meant to enter homes and drive out the evil spirits. 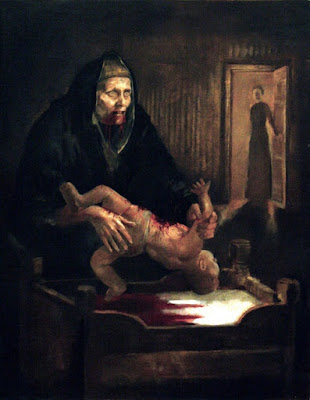 Grýla
Grýla comes to us from Icelandic folklore, another one of my favorite cultures for being truly bizarre and terrifying. She is a Giantess who lives in the mountains with a strange cast of characters. She looks like any old hag with a scarf over her head, except she has hooves for feet and an ox’s tail.
Although she can sense bad children all-year-round, she only comes out around Christmas, when she descends to the villages to find naughty children to eat. Her favorite thing to do is make a nice big stew out of children, but she’ll gladly gobble them up raw.
Her sons are the Yule Lads, who are pretty much like two Santa’s who go around either distributing presents or rotted potatoes. Her pet is the Yule Cat, a monstrous black cat that stalks the snow-covered countryside and eating anyone who hasn’t gotten new clothes to wear on Christmas. And believe it or not, Grýla even has a husband! Although, it is her third husband.

If you have enjoyed learning about these creatures, fear not, there are even more evil Christmas monsters to haunt your holidays! Rather than stealing all of my ideas from another blog, I’d like to give it credit, for it seems to be a sort of encyclopedia for this very topic. For more beasts like these, visit the wonderful, but now unfortunately defunct, A Scary Little Christmas (https://scarylittlechristmas.wordpress.com/)!

Happy holidays, and patiently await that blessed holiday when your naughty children fall prey to all kinds of merciful demons.
Posted by Christine Hadden at 12/14/2015

now this is interesting! Thanks for the creepy critters and the link! It ironically made me like the holiday a little bit more!

Xmas can have such a spooky/horrifying side to it, these myths are pretty out there! Michael Dougherty's Krampus was alright...just not very gory or graphic like I was expecting. It's very light horror, but heavy on the atmosphere.