Recently I was approached about the possibility of someone else guest posting here at Fascination with Fear, and at first I was a tad apprehensive, as this blog is my baby, and though I've added a regular gig at The Blood Sprayer, I didn't want to hand over the reins or anything that drastic.
But after reading through what was sent my way, I was happily agreeable to accepting the article. After all, I could use a little help keeping up.

And so I give you the first post (because I'm hoping she'll do more!) by Camiele White.
Do give her a rousing welcome.

"J-Horror Films that Missed the Mark" 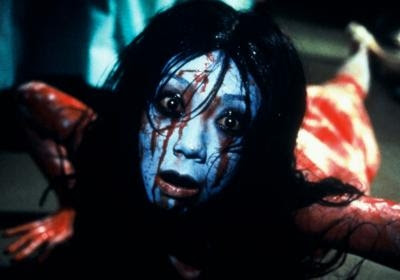 For anyone who is a fan of horror and has found themselves pining for something of the real fright and fantasy of the horror films of the 60s and 70s, Japanese horror (or affectionately named “J-Horror”) has become something of a godsend. Fanatics and freaks had seemingly found the safe haven that they’d been looking for from killer dolls and, worse, Killer Klowns from Outer Space. And just like the underground anime lovers before them, fans of J-Horror had been introduced to something that would yet again awaken imagination and curiosity. The subtlety, the atmosphere. Everything that came from Japan seemed to wring itself free from the annals of mindless gore and milkshake plot lines that made up the American films that came from the late 80s and have now found themselves seeping with the ooze-like reckless abandon of The Blob into American pop culture. Not only were the story lines better, they were better tied up. Even the gore was more extravagant, but the controlled chaos of Japanese directors allowed that the gore followed a purpose, if not to simply indulge in the insanity of a title character.

As with anything that we know and love, there are those J-Horror films that just miss the mark ever so slightly. Few and far between as they may be, there are those films that even made me miss the camp fodder of 1988. Whether silly, cliché, or just plain boring, these are the select few films that really didn’t do much to bring me back to J-Horror (thank God I saw The Eye first). 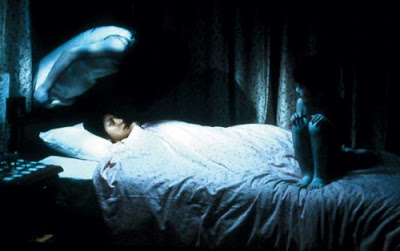 Ju-On: Though its American counterpart, The Grudge, was nothing more than a half-assed attempt at giving Buffy fans another dose of their muse, Ju-On didn’t necessarily win any awards for creativity. After having been a fan of Japanese horror for quite some time, after a while any fan would’ve noticed the same plot line twisting itself around relatively thin dialogue. It isn’t so much the photography of the film that distressed me --if anything that’s what gives it such a lasting impression. Given the budget restraints within which director, Takashi Shimkizu, had to work, it’s a masterpiece of cunning cinematography. The actual problems I had with the film have nothing to do with the film’s ambition. The acting is slipshod and the incessant meowing becomes more monotonous than the now infamous throat groaning. Of course, then the sin to end all sins: the film takes a turn for the American and a cute tutor chick climbs into a creepy attic --because logically if I’m in a house all by myself, the first thing I’m going to do is investigate why there’s a hole in the cupboard leading to the attic. Obviously! It’s the almost brutally obvious turns and twists that the film takes that, unfortunately, makes it fall flat --a sheer case of potential unfulfilled. 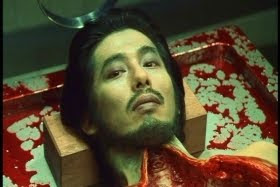 Rasen: Though the Ringu series was and remains very successful, there was one film that managed to escape even the watchful eye of the Japanese. Rasen, Ringu’s original sequel, was released at the same time as the first film in hopes of both films garnering a bigger buzz. However, Rasen was quickly swept under the rug, forgotten by even the studio. Written and directed by two different sets of crew, yet sharing the same cast, the film was seemingly doomed from the start. It almost gets you involved when it suddenly just becomes ridiculous. When dissected cadavers start talking to doctors in attempts to create the atmosphere of tortured psychology, you’ve basically taken me out of the film. What’s even more off-putting is after having watched the notorious film, our protagonist, Dr. Ando, gets a freak fest instead of a phone call. I’ve actually never seen a film do so little with so much --it’s like watching Spain lose to the Swiss in the first round of the World Cup. 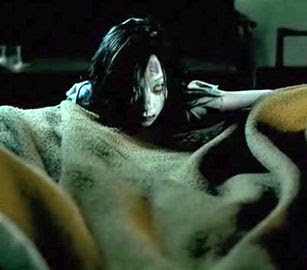 Shikoku: Now, don’t get me wrong. I love a good ghost story/exorcism. However, Shikoku sort of throws viewers for a loop. Opening up with a supposed demon extraction, the film initially shows promise. However, directly after this four minute foray into classic cinematic history, the film goes all lovey-dovey and sort of misses the boat. A spoiled brat who wants to leave her village mixed with a recurrent theme in most J-Horror (the ghost bitch with a grudge) sort of leaves the audience yawning before the second half of the film. It’s not that it’s necessarily a bad horror flick, as far as horror flicks go, but it suffers from the same curse as Ju-On --predictability (only this brand of prediction doesn’t exactly comfort the audience into believing that the film will get any better). There’s always a little girl; she always dies; a family is torn to pieces and leaves a village in the throes of a demon curse that just won’t quit. What else is new?

This is, obviously, by no means an exhaustive list --I’ve left out the obvious game-to-movie (or vice-versa) genre which has a very low success rate even in Japan. I also haven’t seen tons of J-Horror films. I’ve seen my fair share, but not enough to suggest that I’m an expert; that’s why this list is so small.

Although there are only three that actually got me riled up enough to write this blog, these three actually deterred me from J-Horror for about six months --if I’m just going to get the same rehash over and over again, what’s the difference between this and the other American movies that have been released in the past 20 years? What about it, though? Since the topic has been broached, in what films have the beloved Japanese just seemed to allow their cinematic skills to fall short? After all, everyone can’t be Takashi Miike.

Article writer by day, renegade poet by night, Camiele White loves any and everything film. She chases only the original (or incredibly funny) and has been known to talk for hours about subjects that most people just don’t care about. Right now, she gets her jabber-jaw jollies at Halloween costumes StarCostumes.com. If you want to give her a buzz, she can be reached at cmlewhite at gmail.com.
Posted by Christine Hadden at 6/22/2010

Eek. There are dozens of J-horror missteps out there, but I wouldn't pick on Takashi Shimizu#s films. Personally, the Ju-On and Japanese Grudge films frightened me more than Ring did, and I enjoy his other J-horror films, like Rinne, as some of the best in the genre.

Rasen is very different from Ring, but still creeps me out as it suggests just how powerful Sadako could become.

Sorry to disagree. I don't like most of the Asian horrors I see, but the best of them make it all worth it. There are so many Ring rip-offs and cheaply made, badly made J-horrors that you could have picked on...

Hey, man. Don't ever apologise for disagreeing. It's what makes the world go round. Plus, it helps me learn something new.

As regards the list, I've not truly seen too many Japanse horror films that I've been displeased with as I love the genre. As far as Shimizu goes, not exactly picking on him. In fact, I love his style even in Ju-On. I just thought Ju-On was unpleasantly predictable and not very well acted. But, I'll most definitely have to chech out Rinne.

Same with Rasen. Just didn't do it for me and it just seemed silly after a while. I thought the premise showed great promise, then it just failed to deliver for me.

Granted, you're right. There are probably tons of J-Horrors that I could've picked on. As a means to narrow the field, I disregarded any and all remakes and "rip-offs" (they're usually not good no matter what side of the world you live on). In terms of budget, as I said, Ju-On was fantastically shot, but not so great elsewhere.