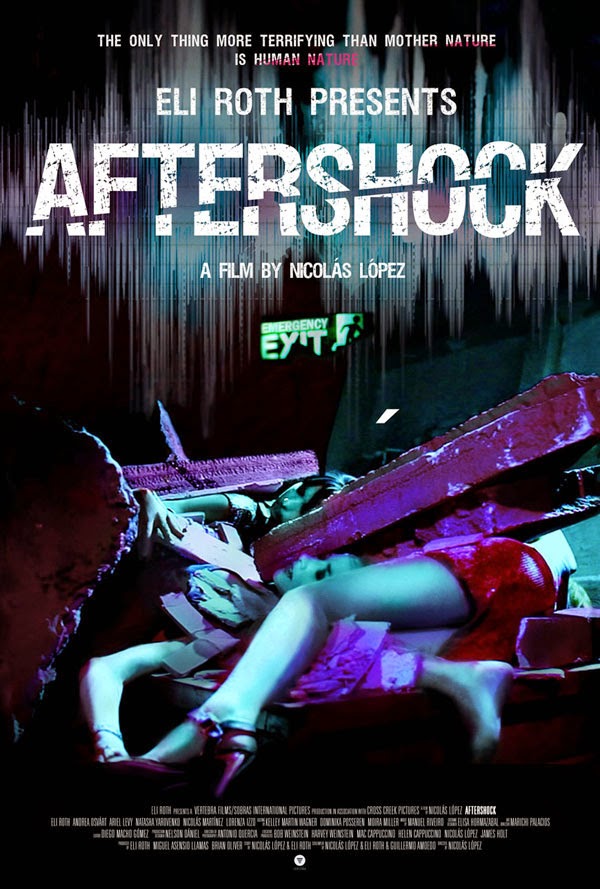 Time for another round of First Ten Minutes. If you're unfamiliar with FTM,  it's basically just that.  We watch the first ten minutes of a film (because of the beauty of Netflix Instant Watch) and give an opinion on where the movie is headed and if we think it will be a worthwhile watch.  In other words, if nothing happens in the first ten, it will probably never get a legit review here on FWF.  So make something happen, filmmakers.  Impress me or lose me forever.

Okay.  I'm a big fan of disaster films.  Love 'em, can't get enough.  I don't just like films, I like books and television shows about disasters and extreme weather and watch The Weather Channel exhaustively.  So when I heard Eli Roth's name attached to a film called Aftershock, I was psyched.

So it was pure logic for me to test the waters of Aftershock.  Starting out with credits, we quickly learn Eli Roth is the star.  Naturally I already knew this, but there it is - top billing. More credits....ho-hum. Roth produced it.  Roth co-wrote it. Oy.  As more and more credits announce themselves on a black screen, at least we get some sort of noise - a siren?  Finally - Eli Roth appears on screen with drink in hand, in Chile, apparently. He's at a noisy club having a glass of (is that really) wine and taking in the sights. Cue the bad music and awful dancing, along with air kisses and cell phone snapshots, etc.  Your basic nightmare.  I'm already sighing, hoping things will turn around quickly.  After all, it's Eli Roth!  Where is the blood?

Soon there has been too much partying and Eli is sprawled out against a wall, drunk as a skunk. Two seconds later he's passed out, which is where we finally get the title of the film across the screen. We're at the three minute mark....

Then we switch altogether....back in time?  Moving forward? Who knows. But now Eli and his two friends are taking a walk through the vast vineyards of Chile with a tour group. Eli is psyched to learn they grow all kinds of varietals including Merlot but his two bored pals are ready to stab him in the throat.  At five minutes we're deep in the winery where Eli has convinced the employee at the winery to take a pic of him and his friends (who are rolling their eyes in dismay). It's clear Eli is a total geek at this point. Khakis and a button-down, a giant camera, and a glass of Chardonnay. And I'm getting a little bored.  If I want to learn about wine I'll just pull out my copy of Sideways, thanks.

So here we have Eli chilling on a couch with a cup of coffee (WTF?) and flirting with a beautiful Chilean broad who seems to be inebriated enough that he might get lucky...until his cell phone vibrates - and he actually takes the call.  (Gah!)  We find out it's his daughter and he's telling her he'll be home soon.

We're at 9:30 and we meet three women (because we have to be boy-girl-boy-girl-boy-girl, ugh) who are shouting above the noise but we are given nothing else.  Could we have something that resembles a horror movie, please? I'm relatively patient when it comes to horror, but come on....

We end at the ten minute mark with Eli losing his chance with the hot drunk chick after he sees her being carried off by another dude as he makes his way back to her after his family phone call.

Honestly, I'm bored.  I would probably hang in there for another five minutes or so just to see if something is indeed, going to happen.  I mean, correct me if I'm wrong - but the movie (because I just can't say film here) is called Aftershock, correct?  As in, earthquake?  So come on, Eli.  Throw me a bone. A bloody one if you don't mind.

So I guess I'll have to continue on for a few minutes more, but I swear - at the 15:00 mark, if it's still all geeks and girls, I'm outta here.  Has anyone else seen this movie and enjoyed it? Does it get better?  Do tell....

Keep watching! My opinion of Aftershock might be in the minority, but I really liked it. It definitely gets a lot more bloody and more serious than you would expect it to. It helped me respect Eli Roth more, as well.

Hey, Michele -
I actually DID keep watching and guess what - I liked it too.
Like Hostel, it really bored me to tears with all the partying and drawn out beginning, but once the earthquake hit, I was all in.
It wasn't fantastic, but well worth a look - especially since it is on Netflix Instant!