Some really great films in this set, folks.

When Lucio Fulci makes a film, you just have to watch - because he's going to do something bonkers every time.  In Zombi 2, that would be the famous shark vs. zombie underwater scene.  Folks, that is something you are not going to see every day, I guarantee it. And with Fulci, you're bound to see some serious eye gore, and this film is no exception. The story evolves around a woman's search for her missing father which takes her to a mysterious Carribean island that is cursed by voodoo and has a scientist bound and determined to figure out why the island's residents are rising from the dead.  With a riveting score from Fulci fave Fabio Frizzi, Zombi 2 is a rollicking good time. 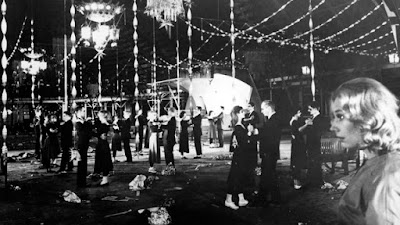 This fantastic film was way ahead of its time.  Starring Candace Hilligoss as Mary, a young woman who is the sole survivor of a horrific car crash that changes the course of her destiny.  After the accident, Mary drives to Utah, where she has accepted a position as a church organist. On the way, she is stalked by a malicious ghoul who seems to coincide with her passing a large abandoned pavillion.  In her new town, she can't seem to escape the ghoul, who shows up unexpectedly over and over again. She also is having trouble relating to those around her - it seems no one even notices her at times.  With a chilling organ soundtrack and a surreal, mesmerizing atmosphere, Carnival of Souls is a shudder-inducing thrill ride. 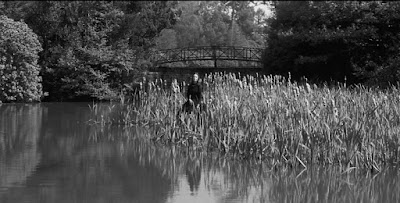 Deborah Kerr shines in this wonderfully spooky adaption of Henry James' classic story, The Turn of the Screw.  It's a classic British ghost story with all the twists and turns you'd expect.  Kerr stars as Miss Giddons, a woman tasked with being the governess to two children, Flora and Miles.  At first, all seems fine, but as time goes on, Miss Giddons begins to notice something is a little "off" with the children - they are acting just a little too mature for their own good. This, along with dark hallways, apparitions and hearing strange noises, the house is giving all the signs of a classic haunting..but just who is haunting the house and why is the reason this film stands far and above other ghost stories.  The lullaby that Flora sings over and over again, Oh Willow Waly, is as haunting as the film itself.  The Innocents is not to be missed. 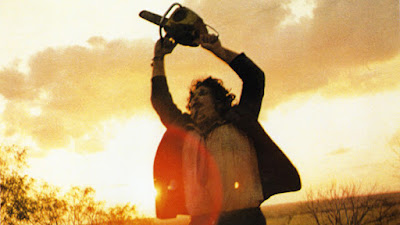 A gritty and fearless film shot on location, The Texas Chainsaw Massacre is not the gory exploitation film that many make it out to be.  There is very little blood or gore and actually relies on realism and shock to scare the pants off its audience.  Sally Hardesty (Marilyn Burns), her crippled brother Franklin, and a few other friends travel to the family cemetery to check on the plots after hearing of grave robbing going on.  What they run into is the demented Sawyer family with our pal, Leatherface (Gunnar Hansen).  I've always loved the audacious way in which the Sawyers are portrayed.  They make me think twice before stopping in any small, podunk town with no stoplights and no claim to fame.  Wait.....I think I already live there....

Dario Argento has a way with color and design in a film that for me, cannot be replicated.  With a new take on this classic coming this year, it's time to be reverent to the original, one of my favorite Argento films.
Susie Bannion (Jessica Harper) is an American studying ballet abroad at a famous German Dance school. She has a rocky start, and doesn't seem to be making friends too quickly.  Worse yet, there appears to be something mysterious going on - rooms they are not allowed to enter, students disappearing, maggots falling from the ceiling, fainting spells she cannot explain...and did someone mention the word "witch"?  Suspiria is an exercise in restrained terror.  And the technicolor production makes it one of the most gorgeous films I've ever seen.  How great that it's scary too! 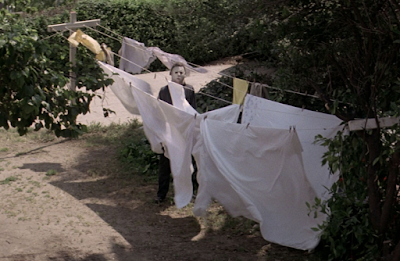 What can be said about Halloween that hasn't already been said?  It's just pure classic John Carpenter, and I love it.  So do millions of other horror fans - and even folks who only watch scary movies at the end of October are familiar with this one, so mentioning the plot seems like a moot point. Michael Myers kills his sister, goes to a mental hospital, then escapes and returns to the scene of the crime to wreak havoc on the town and its unsuspecting teenage residents, including Laurie Strode (Jamie Lee Curtis).  For a very long time, this was my favorite horror film.  I still love it, but perhaps I just wore it out.  I'm anxious to check out the new 2018 sequel, it looks like loads of fun.  Halloween is impeccably shot, has unparalleled suspense, and is the model for which all films in the slasher genre should be modeled.  It's flat-out perfect. 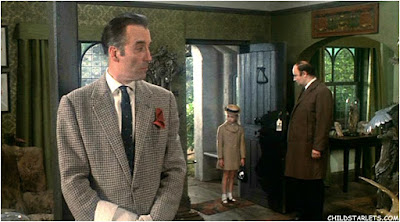 From the house of Amicus, this British anthology film stars horror heavyweights Peter Cushing and Christopher Lee, which should be all I need say at this point.  However.., four segments tell the tales of a writer plagued by visions of his character, a murderer who is driving him mad; a waxwork museum holds secrets that two old friends may regret finding out; a governess/teacher feels the father of her student is cold and distant from his child...for good reason; and a washed up actor finds a cape in an antique store that looks perfect for his current vampire role.  All these stories relate due to the house they were all residents of at one time or another....the house that dripped blood!! Mwauh ha ha!!

A fun and surprising entry into the never ending 80's slasher genre, April Fool's Day is just a delight! Deborah Foreman plays Muffy, a rich-bitch college student hosting a weekend of fun at her parent's lake house. Her friends are a diverse group of unassuming tricksters that either love or loathe the April Fool's themed party unfolding at the house.  The finale of this one is what separates it from all the other 80's clones.  Amy Steel as Kit is the icing on this cake, as she always elevates a movie no matter what the subject matter. But in truth, casting is good all the way around and you really feel like these people could be your friends.  Which is why you get upset when they start getting picked off one by one.

At once unsettling, Lake Mungo is an Australian low-budget film I discovered purely by accident and now am championing to anyone that will listen.  Shot in mockumentary style, we hear the story of Alice Palmer and her family, who are mourning her disappearance and supposed drowning at a family picnic at the lake. As the family grieves and tells their story, it becomes apparent that there is more going on than meets the eye.  Is Alice haunting the family home?  Is she still alive?  I can only say that this movie scared the shit out of me the first time I saw it, and the second time I watched it I saw SO MUCH MORE.  I have been haunted by this one ever since.  It's affecting, creepy and just downright unnerving.  I don't think I need say more.  Just watch it. 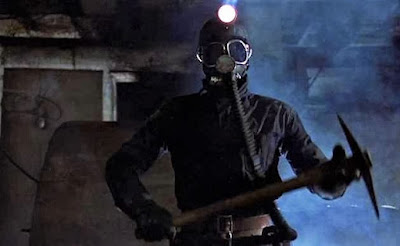 One of my most beloved slasher films, MBV is a joy to behold in all its campiness.  Though it is extremely dated, it's still relatively effective and has the superb setting of an underground mine. Now what could be scarier than that, I ask you?  Years ago, Harry Warden was the sole survivor of a mine explosion due to methane gas levels not being checked because the bosses were at a Valentines party. Harry was stuck underground for weeks, resorting to cannibalism to survive and going insane in the process.  Institutionalized for twenty years, he of course escapes and comes back to take his revenge on the town and their Valentine's day party.  It has some good scares, some decent gore, and horrible acting.  And it's another of the famous "holiday" horrors.  You know you love it, just like I do.
Posted by Christine Hadden at 8/12/2018