Ladies have skeletons too! 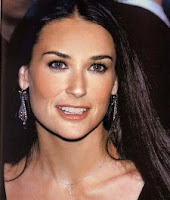 Men love her, women want to be her.
My hubby wants her to talk dirty to him just so he can hear her husky, sexy voice.

The perpetually young-looking former Mrs. Bruce Willis and the current Mrs. Ashton Kutcher has been more about tabloids than movies as of late, and let's face it - if you were lucky enough to marry someone 15 years your junior, you'd want to brag too!

But you know, she started out in horror as well.
In the 1982 shit-fest "Parasite".

Now Demi has gone on to make alot of memorable (in one way or another) films (Ghost, Striptease, Indecent Proposal -to name a few)... but she has also done a fair amount of work in the genre.
I can't really count her as one of my favorite actresses or anything (though I do have a soft spot in my heart for the old 80's standby 'St Elmo's Fire'!) but I did enjoy more than a few of the following flicks: 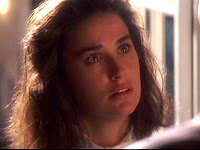 In closing,
I just can't see her on stage at the Academy Awards anytime soon.
Let's just leave it at that.
Posted by Christine Hadden at 7/28/2008