Duct tape can do anything!

What we have here is a little sci-fi flick that comes to us from the director of The Blair Witch Project. 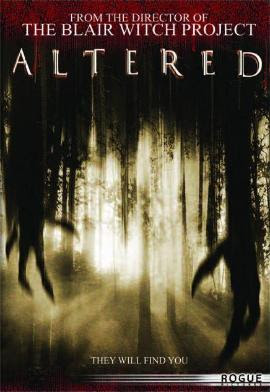 I have to admit to having this movie in my Netflix queue for maybe two years. It's always hovered near the top, but I persistently seemed to move other movies ahead of it, figuring to save it for when I was desperate.
Well, since apparently Netflix has a hard on about sending me Gran Torino (on my list for weeks at number one cause the hubby was desperate to see it) and Last House on the Left remake isn't due till next week... Altered finally made its way to my mailbox.

By the time it arrived here I'd already read dozens of reviews on it, most of which seemed quite positive, so I went in thinking I was in for at least a semi-pleasant experience.
And truth be told, it wasn't too bad.
However...

Maybe it's just me, but I didn't think this was the best - or even most original - sci-fi I've ever seen. Far from it.
It starts out with three redneck-type dudes chasing "something" through the backwoods until by luck or fate they succeed in capturing their prey. Which, it turns out, is a freakin' alien. Right down to its grey-green praying mantis vs. 'The Fly' vs a vagina-resembling head. (Haven't we seen enough aliens of this sort already?)

Anyway, they hog tie this creature and truck it back to a fourth guy's big ass garage. Because nothing is ever explained properly, you are left to guess what the hell the backstory is on these characters.
As you finally figure out - through convoluted dialogue and much shouting - these four friends were taken by aliens fifteen years ago. There were originally five that were kidnapped, but apparently one of them (the brother of the most annoying guy) didn't make it back.

The character of Wyatt (owner of the garage and the guy the aliens kept the longest) had some kind of device implanted in his side so the aliens could keep track of him. He keeps the reminder in a jar. Lovely. What a cool conversation starter. {"Hey, have I shown you my implant? And let me tell you about my probe!"}
He shows the other guys his scar (as if they wouldn't have known about it before) and I just kept wondering... are we supposed to believe this dude cut into his side and removed that implant all by himself? The scar was like twelve inches long and ran down the entire side of his abdomen. Obviously a doctor would have had a few questions that if answered, would have sent Wyatt up to the asylum on the hill for a long stretch.

So for some reason these hillbillies have been searching for the last several years to find and abduct an alien of their own. Why they think this is a good idea is beyond me. I mean, what are they actually planning? Torture? Revenge? Killing one lone alien doesn't seem like it would do anything but piss all the other ones off. Which is exactly what they start to panic about, once they have the non-human visitor strapped down to a table in said garage.
So the whole basis of the movie is the fear and hysteria that ensues after they realize they don't really know what to do with the creature.

Naturally the alien escapes it's constraints (the formidable and awe-inspiring duct tape!) - a few times in fact - and proceeds to exact its own revenge on its captors. When it attacks, it does so with great fervor, and the results are fairly gory. By far the best part of the film.
There are some gruesome effects - including the best intestinal disembowelment I've seen since 'Dog Soldiers'! - and there does seem to be a growing sense of dread in the frenzy of the last half of the movie.

But in my mind, we're not seeing much new here. It is an interesting concept, the humans trying to retaliate for the torture and death of one of their own - but the subsequent counterplay by the alien makes it seem more of a cat and mouse than an outright alien feature.

I will admit the acting was fairly decent (in particular the main character of Wyatt, played by Adam Kaufman). They all had the country boy thing down pretty good. Michael C. Williams (of Blair Witch fame of course) was also good as 'Otis' - which is a pretty stereotypical redneck name, is it not? Might not have been as impressive if the lead characters names were Wadsworth, Chalmer, Kip and/or Holden.

Generally, sci-fi doesn't scare me. At all.
I was a tremendous X-Files fan, though. So I've seen good sci-fi done well. This movie seemed a bit like a low-budget (which it was) X-Files rip-off.
I still think 'Alien' was the best sci-fi pic ever, with the remake of 'The Thing' coming in second (though that could be construed more as horror I suppose).
This movie isn't even close to that. Nowhere near. But I got through it and didn't turn it off - though the last few minutes had me really debating doing just that.

*And for the merely curious? I ended up borrowing Gran Torino from a friend and it was everything I thought it would be. Eastwood still rocks.
Posted by Christine Hadden at 8/16/2009