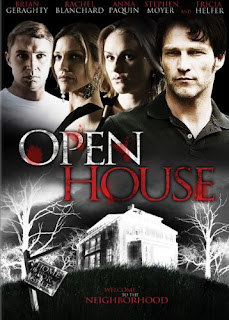 The main draw to this movie for most who see it on the DVD shelf at their local Wal Mart- in particular because of the DVD cover, is the presence of Stephen Moyer and Anna Paquin of True Blood fame. However, don't get your hopes too high. I'm here to tell you they are only in the film for maybe a combined ten minutes. Hell, one of the main stars of the film isn't even on the cover!

Open House is written and directed by Andrew Paquin, and yes- of course that is Anna's brother. What do you do to get attention thrown at your first film attempt? You get your wildly popular sister and her co-star/significant other (now spouse) to give up about a half hour of their time to make cameo appearances.
What we have here is a thriller/horror film that works only marginally well. I doubt I'll ever see it again, due to the fact that if I ever need a Moyer fix I can just pull out my True Blood DVDs.

Alice (Rachel Blanchard) and Josh (Moyer) are in the midst of a divorce, and when we first meet Alice she is attempting to sell the house they lived in to be rid of the bad memories. A real estate agent has been showing the house on a regular basis, though Alice still lives there for the time being.
One day, Alice becomes the victim of a strange sort of home invasion. While the house was being shown, someone enters the house and hides in the basement. Bad thing is, this someone is one half of a serial killing couple. The good news? He has decided to spare her life. When Alice is finally home, David (Brian Geraghty, whom I recognized from The Hurt Locker) springs out from nowhere and hides Alice away in the basement crawl space. Soon we meet Lila (Tricia Helfer, Battlestar Galactica), the other half of the psychotic pair. They settle into the house as if it's theirs and make themselves comfortable.
Seems a strange way to find a house, but hey - to each his own. 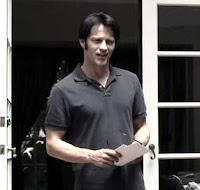 When Josh comes by to pick up his golf clubs and to check the hot tub (because apparently all exes are still required to come fix broken down appliances and such...?) he finds the mysteriously beautiful Lila taking a plunge. As you can only expect, she easily seduces Josh and while they are doing the nasty, David brings out a Michael Myers-esque knife and hands it to Lila so she can promptly stab Josh in the neck, killing him. (Seriously? They couldn't have finished first?) The next line of business? Dragging the body to the basement and dismembering it with a saw (off camera) while Alice has to listen. She sees that it's Josh through the cracks in the wall, and has a silent sobbing spell.

David's character takes a page right from The Strangers. His affect and mannerisms are so detached, so limp - immediately reminding me of the three apathetic sociopaths from that home invasion flick. He doesn't even have the chutzpah of the nutjobs from Funny Games. There's just nothing there. His vapid personality is actually rather well played, as he shuffles randomly around the house, always shifting his eyes as if bewildered by what he has become.

It quickly becomes obvious that Lila wears the pants in their relationship, and that all is not as it seems. When she isn't traipsing around in her four inch spike heels, she orders him around and tells him what to do with nearly every breath, yet she snuggles up to him and beckons him to follow her "upstairs" to her bedroom, as the two are not using the same sleeping quarters for some reason. She continues to say things like "aren't you glad I'm back?" and "We both have to change, David"... confusing at times for those of us watching them interact.

Lila seemingly works outside the home for a living, always heading out in the morning. David (who is always typing away on his laptop when not making dinner or stabbing people) decides to allow Alice to get out of her basement confines and hang out upstairs with him (in chains of course). Naturally Lila tries to use psychology with him, tempting him into thinking she just might leave with him if he lets her go and leaves Lila for good. 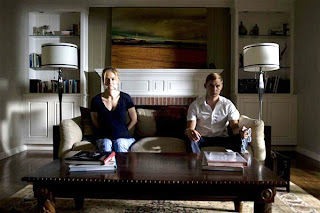 David isn't stupid though, and when Alice's housekeeping staff comes to the door, he's not fooled when Alice tries to ask them to leave, telling them she'll still pay them. She writes them out a check, which of course has 'call the police' written on it. Just as you think her ridiculous plan is going to work (as one of the mexican employees does speak and read English and sees her plea), David shows up and stabs the man several times, then slits the housekeeper's throat as well. Immediate guilt for the murders afterward and his anger because of Alice's deception prompts David to beat the hell out of her with his belt and take her back to the basement.

There are several moments in the script where you know they meant to scare you. But it was all just so darn predictable. Once, when David allows Alice upstairs to shower, Lila comes home early and they have to hide Alice in a closet. Of course that is when the realtor comes back and is unable to find Alice. When he finds Lila instead and she tries to woo him unsuccessfully, Mr. Century 21 bites it as well.

Eventually though, Alice seems to convince David that he is stronger than he thinks, and that he should be able to leave Lila and never look back. She lays it on thick, even making David believe her lies enough to pack a suitcase for the both of them. He truly begins to have feelings for Alice, and yet we can see right through her charade. We know when she gets the chance, she's gonna retaliate. David even tucks a video of Alice and her ex-husband in happier times into the suitcase, so we are to assume he is regretful for his actions and wants Alice to have a reminder of her dead (and packed away in pieces in a cooler in the basement) hubby.
Unfortunately, Lila finds the suitcase. 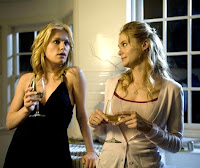 Honestly, there isn't much more I can say to actually convince you to give this a try. The acting really isn't bad, it's just that the script is hollow and pointless and has been done in a hundred different ways and a thousand different scenarios. Nothing new. Even Anna Paquin's five minutes on screen as a friend of Alice's aren't life-changing in any way shape or form - as a matter of fact her entire sequence was utterly meaningless. As for Moyer, as usual he is electric for his few minutes on screen, but if you're looking for something of his to get excited about (besides his bloody turn on True Blood), go rent Restraint. A much better thriller.

Assuming the ending was intended to be a bit of a twist, it really had no effect on me at all. I figured it out about fifteen minutes in, and you will too- it's not rocket science.
That being said, if you're a fan of the ever-popular Lifetime Movie of the Week, you're in for a real treat.
Posted by Christine Hadden at 9/02/2010

I heard really mixed things about this one. That dude in the white shirt looks like he just stepped out of FUNNY GAMES! I have this in my queue and now I'm in no rush to watch it. With a cast like that, I'm really surprised it wasn't better. I'm wondering how many people got suckered into seeing this due to Paquin and Moyer. They're pretty much the main reason why I wanted to check this out. Oh well. Great review.

I figured it out about 5 minutes into you review :) Bummer, because the latest issue of HorrorHound gave it a decent review.

Can we stop the floating head think on box covers? Puh-lease?

Fred: Well, I will say the acting was pretty good. Helfer was a little over the top, but everyone else did a decent job. The film itself wasn't horrible, I guess I was just hoping for more.

Cortez: Those damn floating heads! What is up with that? Like I said, they didn't even have Rachel Blanchard on the cover and it was her house they invaded!
And seriously, it's really not an awful movie, but just so-so.

Great review! I've been debating whether or not to check this one out...I like that Anna and Stephen helped the less famous Paquin out by appearing in this. I think I'll follow your advice and check "Restraint" out- I've been hearing good things!

Miss Sardonicus: Not sure if you have Netflix or not, but Restraint is playing on Instant Watch. I did like it a lot better than this one, in fact.
And yes, Anna & Stephen get gold stars for being a good sister & brother-in-law :)