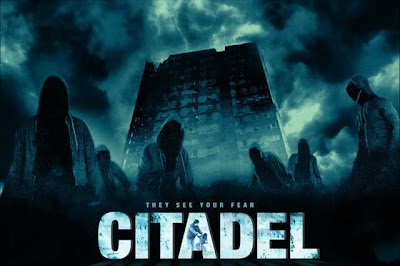 Citadel, the first film from Irish director Ciarán Foy, is more a thriller - at least until the last third of the film. But that fact doesn't make it any less frightening. The visceral fear that it can trigger left an impression on me, as did the fine lead performance by Welsh actor Aneurin Barnard.

Tommy (Barnard) and Joanne (Amy Shiels) Cowley are a young couple about to become parents. They are leaving their run-down apartment in a very seedy and dilapidated area of housing projects in Ireland. The grimy, depressing building wreaks pestilence and corruption, and the duo are over the moon about putting that part of their life behind them and moving on to a better future. 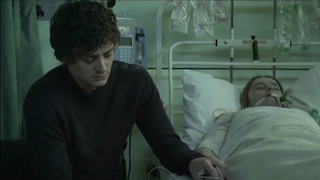 As they are leaving the dour building, Tommy goes on ahead to take the last of the luggage down to ground level.  He steps into the elevator and just as the door closes he sees his very pregnant wife get attacked by a small gang of youths in hoodies.  He's unable to get the elevator door open (crappy building all around) and when he finally is able to reach Joanne, she's been beaten up severely and has a hypodermic needle sticking out of her belly.  Things only go downhill from there, as Joanne ends up in a coma caused by infection. The doctors however, are able to save the baby, Elsa. 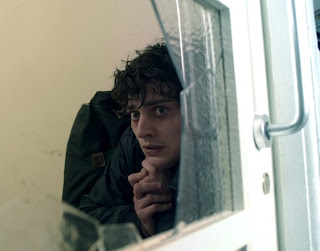 Nine months go by and we see what kind of condition this grave situation has put Tommy in.  He's developed a relentless case of agoraphobia from the trauma, and has an unbearable fear of stepping outside his door (which coincidentally ends up being the exact same housing project, as he is unable to leave).  It has literally ruined him, and if I do say so, I have never seen anyone portray this type of serious phobia in such a believable manner. Barnard's acting is simply top-notch here. It made me as nervous and fearful as he was. His sheer terror at attempting to open his front door was entirely palpable.

Tommy does manage to make it to the hospital to see Joanne apparently, and is there with her when the doctors take her off life support those nine months later.  I am usually not very emotional at horror, probably because there aren't too many films that evoke strong feelings of sadness from me - but to see Tommy's extreme grief as he watches his wife's life slip away definitely caused me to shed a tear or two.  To see him there with his little one as her mother took her last breath... aw, it was heartbreaking. 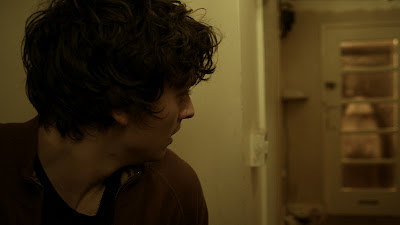 Unfortunately, things don't really get better for Tommy.  As he tries to put his life back together, he is again taunted and tormented by the hood-wearing children. They show up at his door, break in and terrorize him - leaving him a mental wreck.  He has a friend Marie (Wunmi Mosaku), who is a nurse at the hospice where Joanne was kept. She tries to reason with him, telling him the youths aren't the same ones involved in the attack on Joanne, and these kids are just acting out, trying to get attention, and that they all deserve a chance at a better life.  On the other hand, a short-tempered priest (James Cosmo) just causes more anxiety and fear for Tommy when he tells him the children will be back - to get his daughter.  The priest tries to convince Tommy that the terrorizing kids are not children at all, but a type of demon hell-bent on stealing children and raising more like themselves. He claims the children can "sense and see your fear" and thrive on it. When baby Elsa is taken right from Tommy's arms from the crazy delinquents, we have to hope Tommy has enough mental constitution to fight for and take back what is his and come out the better for it. 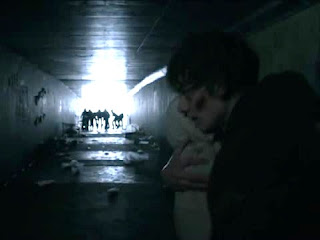 Citadel is a certainly a depressing social commentary about the face of welfare today and how far we've digressed.  While Tommy and Joanne sought to get out from under the stigma of the down-and-out recipients of assistance, it's obvious that the housing projects support hundreds of lives every day but berate them into thinking they aren't good enough to get out and live prosperous lives, or at least lives unburdened by crime and fear.
Nothing to me is as scary as thinking about a young family living in a housing project where the crime rate is through the roof, people are afraid to open their doors, and their neighbors are drug dealers or murderers.  Of course I'm sure not all the projects are this way, but the stereotypical look is probably not too far off the mark in most cases. 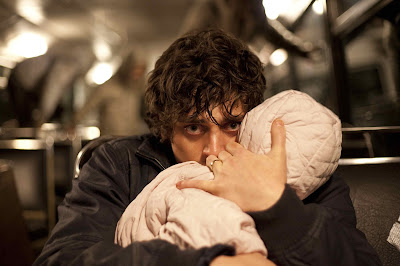 Tommy's struggle with his crippling phobia was again, completely realized and brought to life by Barnard. I can't praise his proficient work here enough. The film takes a nice slice of time developing Tommy's character and it forces us to feel true sadness and despair, along with utter paranoia, right along with him.
As the movie progresses it does morph into more of a horror film, with dark, shadowy corridors and creepy children beating people senseless, but it never strays far from the white-knuckled fear lodged deep in Tommy's psyche, causing us an inherent need to help him and hope everything works out alright.  I don't usually get so involved with a character as I did with Tommy, so in my book that is reason to celebrate and pronounce Citadel a must-see.

*On a related side-note, after watching the movie's extras, I learned that director Ciarán Foy wrote this film with a real-life experience to lead him.  As a young man he was the victim of an unprovoked attack by a bunch of wicked teens with a hammer, causing him to suddenly suffer - as Tommy did in the film - from an extreme case of agoraphobia.  With this horrific incident in his past, it's no wonder Foy was able to put so much clarity and passion into the role of Tommy.  I look forward to what he serves up next, though I certainly hope he hasn't had any more horrific experiences like that to draw from.
Posted by Christine Hadden at 3/04/2013

When I watched the trailer I totally thought this was a zombie flick!! I was wrong, but this movie sounds pretty fucked up and terrifying. I'll check it!