Beneath (2014) : When Fear Meets Madness Below The Earth 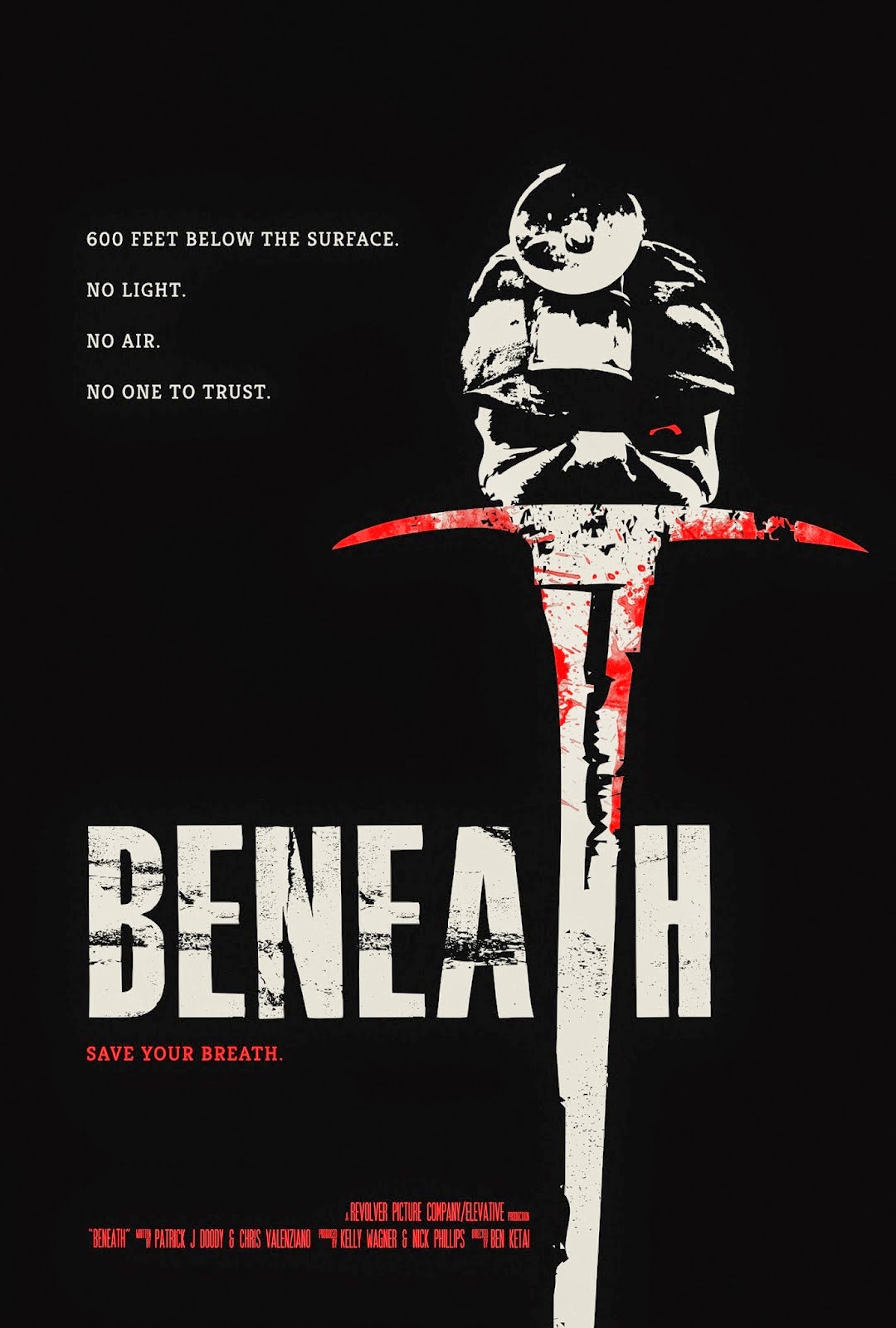 I live in the coal-mining region of the Appalachian Mountains in the eastern US.  This area is home to thousands upon thousands of underground mines, and in turn employs hundreds of thousands of coal miners.  Some houses in my and neighboring towns are built on old mines and at times, have sunk into the earth. There is (at least in my opinion) a ridiculous amount of cancer in this area.  Lung cancer and emphysema from breathing in the coal dust, as well as other cancers you'll have a hard time convincing me isn't caused by all the noxious fumes and pollution the earth and water sources are forced to consume as they settle into the ground. That said, this is a very proud area, where lives are built and families are raised due to the coal industry.  It's a dying industry, to be sure, but nonetheless it is the backbone of the Appalachians.

This little history lesson does have a point.  If you want to scare someone from this area whose lives are already touched by coal mining, make a horror movie about a mining accident.  Mining disasters, collapses, cave-ins - they are all a part of life here and miners know the chance they take every time they go under the ground.  There really couldn't be anything scarier, in my opinion.  Except maybe if you made a movie about it.  You've got everything a horror fan could possibly need.  Dark, dank and creepy? Check.  Extremely dangerous? Check.  Claustrophobia? A BIG check.  Stuck in a helpless situation? Check. People losing their mind, hallucinating, and resorting to murder? Check (oxygen depletion will do that to a person).  Possible supernatural element?  Check....

Most horror fans have seen My Bloody Valentine.  And many horror fans have seen The Descent.  I don't think it's me going out on a limb to say Beneath is kind of a lesser mash-up of these two films.  While it will never match The Descent's balls-to-the-wall dose of claustrophobia, and it doesn't have the blatant (and sometimes unintentional) humor of MBV, it does stand on its own as a decent flick to check out on a random Saturday night. 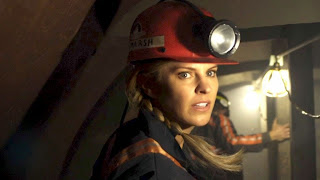 Samantha Marsh (Kelly Noonan) is back in her home town to see her father George (Jeff Fahey), who is ending his long mining career and doing some celebrating with co-workers on the night before his last dig.  This coal miner's daughter moved away and became (much to the chagrin of George's fellow miners) an environmental lawyer.  Partying lends way to teasing and eventually George's fellow miners daring Sam to come into the mine on George's last day.  Sam's old boyfriend Randy (Joey Kern) isn't too keen on the idea - and some of the older men are a bit rattled when Sam agrees to go, saying it's bad luck for a woman to be down in the mine.

But off they go, greeting the hesitant sunrise as they drive to the mine early the next day.  Randy advises Sam to "say goodbye to the daylight" as they descend into the mine, and you can feel Sam's uneasiness kick into full gear.  Naturally, you already can surmise something tragic is about to take place, and it does.  When one of the miners accidentally drills through a support wall, he triggers a collapse, leaving some men dead or separated from the others and unaccounted for, with the remaining miners trapped.

Luckily, those that are together are in the same vicinity as the "condominium", a large metal container filled with supplies and enough oxygen to keep survivors alive for 5-6 days - which should be ample time considering communication with the world above leads them to believe they will be rescued within 72 hours.  So they settle in to the tin box, which itself seems even more claustrophobic than the mine, and fix up the nasty fracture of one of the older men.

When they start to hear sounds coming from outside the container, they assume it could be coming from miners still trapped in the tunnels and several of the men leave in search of survivors.  As is oft the case in horror films, people become separated and suffer the consequences of being alone.  What we are teased with here though, is not just the fact that Sam and the men are becoming more oxygen depleted by the moment, but also that there may be something preternatural at work here.  A story told about a group of 19 miners who were lost in a cave-in during the 1920's lends a hint of nostalgic terror to the movie, and makes the viewer start thinking about possible supernatural elements presenting themselves. Is something else down there in the depths of the earth with them? 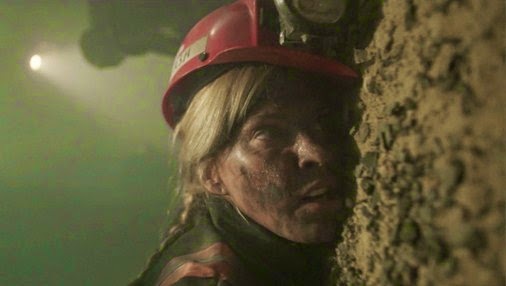 The otherworldly are always more dreadful when enclosed in small spaces. Movies like Below (terror on a submarine), Devil (in an elevator), The Last Winter (at a drilling base in the Arctic) and the aforementioned The Descent (in a series of endless caves) are proof positive that you don't want to be in close quarters with any type of paranormal activity.  (In fact, if claustrophobic horror has your interest piqued, check out this post.)

The decision of going forward to look for fellow lost miners or staying put to try to save themselves and conserve oxygen brings morality into the film as well.  But when things start going awry at the container, all bets are off and the dwindling group heads deeper into the mine to search for other survivors, discover a way out, or run out of oxygen and die within the dark mine shaft. 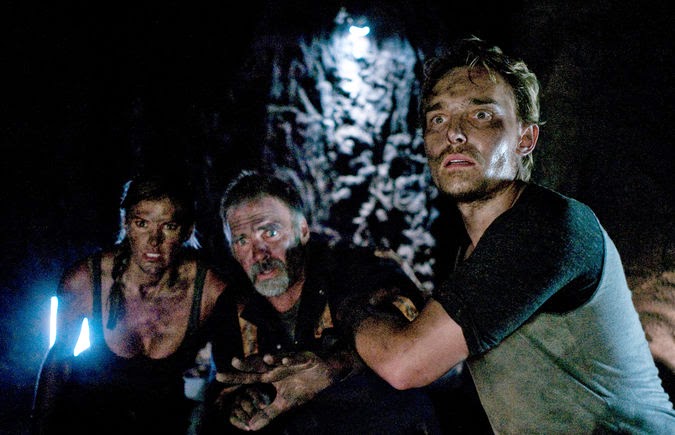 Effects in the film are minimal, but what is there is good.  An early leg fracture is grisly, as are a few pick-axe injuries that spill insides and crack skulls.  Ghostly effects are good as well, not too overdone and not too many that it gets mundane.  Acting skills are noticeable as well, with Fahey wheezing and coughing his way through most of the picture and Kern delivering believable concern for his fellow co-workers and later fear as the O2 dwindles and the body count rises.  Noonan, as Sam, is a convincing big-city girl stuck in Hickville, USA, and not fitting into the hometown scenario anymore.  But her love for her father is palpable and her terror regarding her questionable fate is easily seen.  Again, I wouldn't say her acting is quite up to the standards of the majority of the female "Descent" cast, but she does hold her own.

We are meant to be a bit confused by Beneath at times, I think.  Are the hallucinations that present themselves ghosts?  Or are they they product of very little oxygen and a whole lot of mind-tricks? I can think of nothing more terrifying than knowing you are trapped 600 feet underground and your oxygen supply is little to none.  I assume there would be a certain amount of denial, which we are shown by Sam here.  And as that wavers and fate is realized, acceptance would set in.  That's something we can deal with.  Optical illusions that may or may not be ghosts of miners long lost - that's another thing altogether. 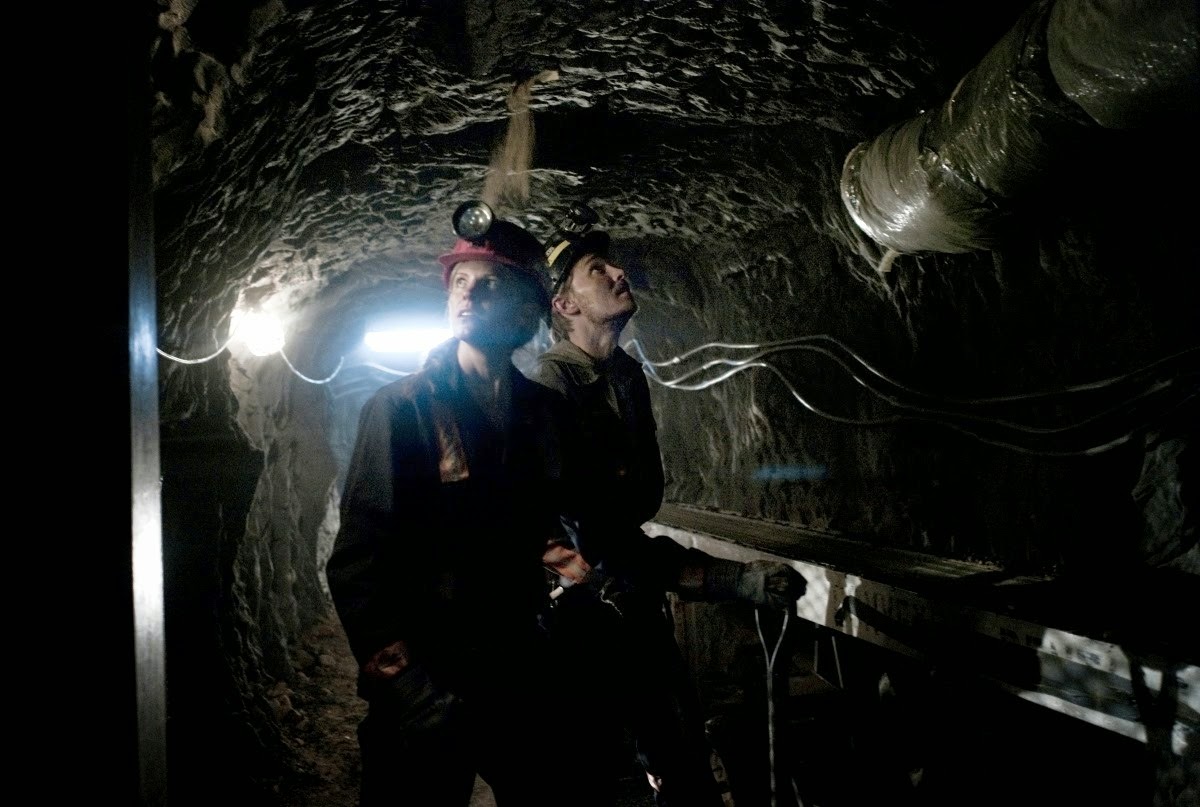 One minor annoyance is the film tagline, "based on true events".  Hmm... If I had a quarter for every time I saw that I would be buying that new 4-door Jeep Wrangler I have my eye on.  That ridiculous statement dumbs down nearly any film it is attached to.  Think about it.  No really... The Amityville Horror, The Haunting in Connecticut, The Entity, The Mothman Prophecies, The Serpent and the Rainbow....I could go on. And on. But I won't.   Hey, we can't all be The Descent.

Regardless, I enjoyed this little flick well enough. Coal mining is a brutally unforgiving job, wrought with injury, anxiety, and a sometimes hopeless future, so when you add in the supernatural factor, it's bound to scare me well enough.  I've always been a huge fan of MBV, campy or not - so another film set in a mine was bound to be gold to me.  See what I did there?
Posted by Christine Hadden at 11/02/2014