I love indie horror.  It's not that I don't enjoy mainstream films as well, because I do.  But give me a good indie film the likes of Absentia, The Pact, Lake Mungo, or The Invoking (from the same writer/director team as this film), and I'm really in my element.  Indie horror evokes a certain bare-bones feel that a big Hollywood production just can't emulate.  So when I was asked to take a look at the newest offering from The October People, The Device, I happily agreed.

Co-written by Jeremy Berg and John Portanova and blending elements of sci-fi, horror and let's face it, family drama, director Berg's The Device moves away from conventional films in several directions.  I'm not an especially big sci-fi fan, but when it's done right I enjoy the hell out of it and count Alien (1979), Invasion of the Body Snatchers (1978), and 2009's Moon as three of my most favorite films, any genre.  I also really enjoyed the recent Dark Skies (2013) and am one of the biggest fans of The X-Files perhaps ever. So though I don't exclusively seek out science fiction, I do love sci-fi done well.

The Device teases us with the possibility of aliens, but doesn't base the film on the search for extraterrestrials like so many films before it.  It first wounds our emotions and forces us to care about the people involved in the story, instead of just throwing some little green men our way.  We come to have a vested interest in who may be getting hurt by what is going on, instead of trying to find out where they came from and what they want.  This change-up in format and technique is welcome and leads to a more personal film, despite the scares.

Abby (Angela DiMarco) and her fiance Calvin (David S. Hogan) are picking up Abby's sister Rebecca (Kate Alden) after the death of their mother.  The two women are set to release their mother's ashes at a family cabin by a lake.  The sisters haven't seen much of each other and it's obvious the duo has baggage, both from their own relationship and the one they shared with their mother. We learn Rebecca had been kidnapped and apparently assaulted by an ex-boyfriend when she was young while at the cabin, so the place understandably has bad memories for her. But Abby wants to try to help Rebecca push past those memories- to put them behind her.  Both sisters are trying to get back to a semblance of normalcy, and think this weekend of closure will help.

After dispersing the ashes into the lake, Rebecca heads off into the woods with Abby anxiously following after her. They find what looks to be a plane wreckage of some sort and Abby then discovers a sphere-like black orb and shows it to Rebecca, who immediately says they need to go back to the cabin and leave the wreckage alone. Something sharp on the sphere jags Abby, making her hand bleed. When she looks up, Rebecca passes out. Back at the cabin with Rebecca safely in bed, Calvin and Abby discuss the device, wondering what it is for and where it came from. Calvin's mind focuses on money, and he can't wait to see what it could be worth.

When Rebecca discovers that the device is in the cabin, she freaks out and starts saying they should not have brought it back with them and that she wants to go home.  Calvin and Abby privately discuss how they can help Rebecca face her demons and move on, as a family.  But that night Abby has a vivid yet eerie dream in which Rebecca warns her they must leave the cabin, disturbing her enough that the next morning they pack up and head home.

Settling into her sister's home becomes a problem when Rebecca discovers that Calvin has brought the strange device home from the cabin.  Arguments ensue about what the device is and how dangerous it may be, and as freaked out as Rebecca is you begin to wonder if she has seen something similar before, and we start thinking there is more to her "kidnapping" than meets the eye.  When Abby receives a call from their mother's sister Linda, it's a heated argument, with their aunt more than just a little pissed that they've been up at the cabin.  She is entirely pissed that Abby took Rebecca there and tells her to send her home on the first bus back to Louisville, which Abby blatantly ignores.

Abby continues to have disturbing dreams at night, with each one becoming more and more upsetting.  She feels certain an alien-like presence is in the room with her,  watching her...wanting something.  She becomes convinced that the device has something to do with it, and begs Calvin to get rid of it.  But Calvin is allowing himself to be completely obsessed with the orb and its powers.  His personality begins changing the more he handles it, and he even starts having conversations with it - or whomever is controlling it.  Rebecca, seeing what is going on around her escalating to dangerous proportions, finally comes forward and explains that it wasn't her boyfriend Chuck that abducted and assaulted her all those years ago....

As in Berg's last film, The Invoking, he has a great talent of evoking a really unsettling vibe just by showing dark woods, empty fields, strange lights, serene lakes.  The tall trees become sinister, a slight breeze foreboding. His characters have interesting back stories and face real-life problems that end up intermingling with whatever type of horror they are facing.  It's not a fast-paced film, and in fact may be too slow for action-hounds who like their sci-fi a little more Aliens than Moon.  But it will get under your skin if you let it.  Which let's face it, we want it to be an unnerving peek into a world we don't understand, just like all other sci-fi strains to do.

The actors in The Device are totally capable and come off as people you would be friends or neighbors with, in particular the two female leads.  They are quite convincing as sisters trying to reconnect and more importantly deal with a long ago trauma that led to their separation.  Their angst about this crossroad in their relationship is one of the best parts of the movie. 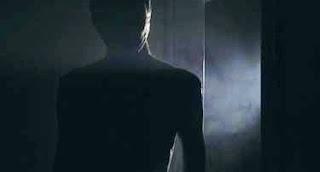 Special effects here are minimal, but seeing an alien shrouded in a misty fog enhances the age-old rule of what you can't see is scarier than what is right in front of you.  Sometimes just a quick glance out of the corner of their eye - did they just see something? - is more terrifying than witnessing something the eye is meant to see head on.  This movie is certainly more about relationships and facing truths than it is about alien abductions.  But the building tension of not knowing just what is "out there" leads perfectly into the discovery of what they really do need to be afraid of.  I'd be remiss if I didn't mention the eerie score by Joseph Molner.  It's absolute perfection in it's subtlety, and I'd love to get my hands on it.

The Device is yet another solid film from The October People, combining unnerving sci-fi elements with a  depth of characters you will actually care about when they face the dreadful circumstances thrown at them for not following their gut instincts and turning back, deciding instead to pry into worlds unknown, with a devastating outcome.

Labels: The Device, The October People