AT LEAST THE MUSIC WAS GOOD... 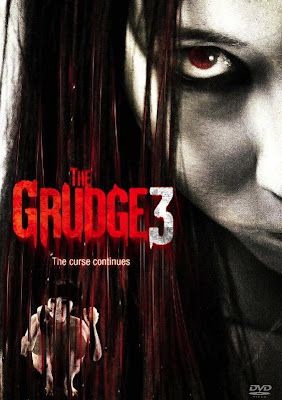 The Grudge 3 (2009) is a pointless, derivative, mess of a sequel.
I really hesitate to call it part of a trilogy, because somewhere in the back of my brain there is something telling me that greedy bastards somewhere are already penning the script for The Grudge 4.
Ugh.

This one takes place in Chicagoland, where the sole survivor of Part 2 is having some mental issues regarding his family being slaughtered by the infamous Kayako.
In the first few minutes, he is killed (sorry if I spoiled it for ya, but couldn't you see it coming?) by said Japanese freaky-ghost girl.
But not before his doctor (the terribly miscast Shawnee Smith - though she is truly the 'marquee name'... that should say something, right? Trying to believe her as a doctor is a stretch, I'm sorry. Stick to the Saw movies, 'kay?) tries to tell him he's imagining the totally-in-need-of-a-tan Kayako.
Not so much.

Enter Max, Lisa, and Rose. Max is apparently the building manager - or some such shit -of the apartment building where the Grudge 2 folks were killed. Again, a little hard to believe someone so young would not only be managing an apartment complex, but raising his two sisters as well.
Party of Five it ain't.
Lisa is oh, I don't know....eighteen or so - and she's getting too busy with her cutie boyfriend to notice the problems, at first.
Rose is an annoying little pre-pubescent with an asthma problem, of course! (signs of Signs...)

Max is having trouble getting renters. I call it 'Amityville Complex'... how about you?
Seems no one wants to live in a place where such "legendary horror' has taken place.
Imagine that.

One day... Kayako's sister, fresh in from Tokyo, thinks she has the solution to the curse.
Some confounded ceremony to rid the place of the curse before it kills EVERYONE!!!!

The acting really wasn't too bad, all things considered. But this series needs to stop, now.
All the powdery makeup in the world can't make up for a good plot.
Which is not evident here in the least.

Actually, I'm sure the Plague is soooo much scarier.

*The comment about the music stands.... the main themes composed by Christopher Young are intact here - and if I could have sat through the credits I may have noted that he did indeed provide the score here, but I don't know for sure. But the score is simply the best part of the film.
Posted by Christine Hadden at 7/01/2009