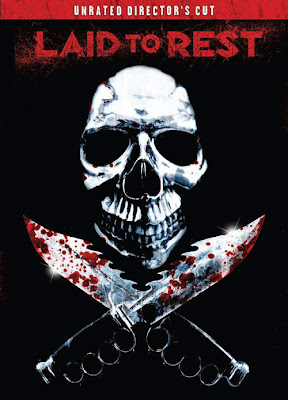 Laid to Rest isn't the most unique, most shocking or even most gory movie I've ever seen, but it kept me entertained fairly sufficiently for an hour & a half.

I didn't know any of the actors (well, that's a lie - I think the geeky computer nerd may have been in the movie Twister...) but they all did a fairly respectable job with the plot they were handed.

That said, the plot is an open ended clusterf**k. It really doesn't mesh, and you can see the disorganization and clutter right from the get go. Sometimes it's cool when things aren't explained - it can really add to the suspense as you formulate your own opinions as to what is happening and where the flick is going.

I don't believe the lead character's (the extremely well-endowed Bobbi Sue Luther) name was ever given, in fact I think she was referred to as "the girl" in the credits. Which is par for the course because our heroine (and I use that term very loosely) wakes up in a coffin, unable to remember how she got there or who she is. She manages to knock the casket off the table and it falls open, releasing her. She tries to escape (after making a ridiculous call to the police in which she actually had to look on the wall by the phone where it said "Call 911 for emergencies" or some shit like that!! As if you'd forget how to call 911) but is prevented from completing the call due to a masked killer (you knew that was coming, right?) tries to apparently finish what he started.
I guess the title stems from the fact that 'the girl' woke up in a casket in a funeral home.
I guess.

Our masked executioner is wearing a chrome skull. 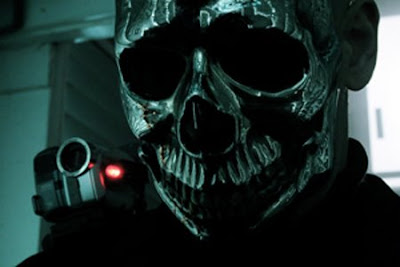 Yes, it's hard to believe there was any kind of masks left to use in horror movies. But it was creepy I guess. And for some reason he is after "the girl".... And he wants to record it. Strangely, he wears a video camera strapped to his shoulder. Okay, now that's unique.

Cut to "the girl" running down an abandoned road (no one said it was original, remember?) and she gets picked up by a redneck dude (Kevin Gage) who takes her back to his place. No, he's actually not a killer/rapist/nutjob passing himself off as a country yokel. He's a decent chap who's married and he & his wife take the girl in and try to piece together what happened. Too bad the guy's name is Tucker... sure makes him seem like a cornfed bumpkin.

Unfortunate things happen to Tucker's wife (whose name escapes me)... and 'the girl' and Tucker end up making their escape in Tuck's truck (I just wanted to write that). They pull over at a house along the road and then we meet said-geek Stephen.

I don't want to rehash the entire movie - watch it for yourself. But suffice it to say, there is plenty of gore. Chrome Skull uses a pair of knives to do most of the killings (see DVD cover), but there are a few other good gore deaths - including one using fix-a-flat, and another with a caustic chemical agent to the face. Nice.

There are so many blatant loop-holes here. Why is Chrome Skull chasing her? Who IS she? Why does the killer videotape everything? Why was she in a coffin?
I could go on...but won't.
I laughed at some reviews I read that stated this film had 'no redeeming qualities'... Come on people, this isn't Hitchcock for Christ's sake. Hell, it's not even Rob Zombie.