Knowing may not be enough. 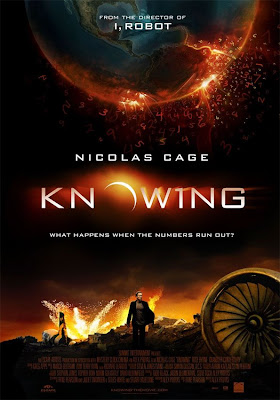 I'm really not sure how this movie would be categorized. I assume it would be sci-fi...?

I'm also on the fence with Nicholas Cage. Some movies I like (yeah, sue me - I like Con-Air!) but alot I have found less than distinguished (but you can't knock the guy for his Oscar for Leaving Las Vegas- depressingly good flick).

I actually liked the premise of this. Starts out in 1959 when a time capsule is closed up at an elementary school in Massachusetts (close to MIT, apparently, because Cage plays a 'brilliant astro-physicist'....but of course). A class of students have all contributed a picture they have drawn - one that supposedly depicts what they think things will look like in 2009 when it is to be opened. A strange girl, Lucinda - isn't drawing a picture. Instead, she is covering a page front and back with numbers. While most teachers would have cast aside her "picture", it gets stuck in the capsule.

Shoot ahead a half a century and the school is opening the capsule. Every kid in class gets to check out one of the old pictures that are ready to see the light of day after 50 years.
Nic Cage's son in the film gets Lucinda's freaky puzzle-like scrawling. Nice.

Did I mention astro-dad's wife was killed a year before and they are both still dealing with that?
There always has to be some kind of conflict, right? The death does come in to play though, so I guess it works.

Anyway, the boy takes the paper home (though he wasn't supposed to) and the Prof accidentally sets a wet glass on the paper - making a ring around a bunch of the numbers. He takes a good look at the rambling numbers and like the dazzling whiz he is, he sees a pattern.

The sequence of numbers just happens to be the dates of every major disaster - natural or otherwise - that has occurred on the planet within the last fifty years. Such as 9/11, the Tsunami of Dec. '04, Hurricane Katrina, the Oklahoma City bombing, plane crashes, wildfires, earthquakes, terrorist attacks...you get the picture.

There are three events that have not yet occurred.
So it is a race to see if they can stop the disasters or if they are fate - predetermined events that cannot be prevented.

The present-day family of the strange little girl is also involved but I won't go into that.
I found it hard to believe that anyone would have married or had sex with that weirdo to produce the current family members.....

I liked this movie till about three-fourths of the way through, then it got a little too existential and celestial for me. It morphed from a thriller of sorts to an all out barrage of mystical, transcendental mumbo-jumbo.
Way too much theoretical poppycock. I actually read in some reviews that folks thought this was "spiritual" and "uplifting".....
Like, really?

And I did not like the ending. Just silly.

But the concept was cool. A little X-Files, a little Close Encounters, a little The Day After Tommorrow (not great by any stretch, but you get my drift)... I think they could have done more with it instead of jumping through so many hypothetical hoops.

But maybe that's just me. Check it out for yourself.
Hey, it's better than The Happening, so that's saying something, right?
It isn't a waste, but you have to check your brain at the door sometimes, don'tcha?
Posted by Christine Hadden at 7/25/2009