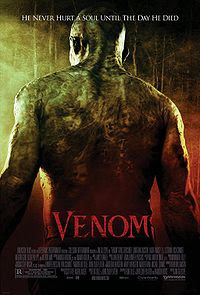 Venom (2005) is a run-of-the-mill voodoo fright film that is nothing short of mediocre. I was surprised by the somewhat decent cast - a lot of which I've seen in other films of the same genre - but the plot was really just okay. Shockingly, there were people on various sites (Netflix, Amazon) that actually gave this movie five stars. These are people who have never (ever) seen Psycho or Jaws, most assuredly.

Alright, apparently there is some sort of Haitian vodoun custom in which those in the know (i.e. voodoo priestesses) can use snakes to siphon the corruption and evil out of people and save it for future use. (Wow, that would be a neat trick).
Ray (Rick Cramer), the town weirdo simply because he is a hick, saves the life of the local backwoods 'witch' from a horrible car accident, but in the process gets bitten by the stash of possessed snakes she carries around with her in a suitcase. If it sounds convoluted, it is.

The woman lives through the accident but later dies. Ray goes over a bridge in the old woman's car, along with the snakes. He doesn't die from the car submerged in the water as much as from the dozens of snake bites. He's drug from the water and taken to the morgue where he promptly rises from the autopsy table and leaves.

Two of these teens, Eden (Agnes Bruckner of The Woods and Blood & Chocolate) and Eric (Jonathan Jackson, Riding the Bullet), are directly responsible for the car accident. They were arguing on the bridge when Ray came through - he drove around Eric's car and in doing so, hit the voodoo woman's car, sending it over the bridge and into the river. Here is where Ray does his good deed and pays for it later.

So Ray is back... and looking for a little vengeance. One by one, Ray picks off these teens, all the while consumed by the rage and need for brutality of the many evil souls he possesses.
Uh-huh, whatever. 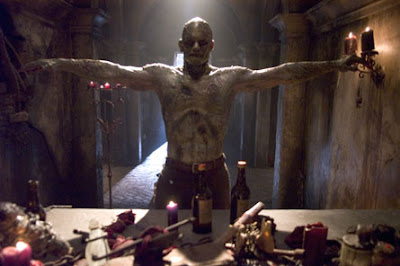 Reanimated Ray (would have been a more amusing title) starts morphing into a snake-like man/creature. There are some practical effects, some CGI, which here is fairly standard. I'm not a huge fan of it at all, unless it's done well (The Lord of the Rings) - and I hate it when it's done poorly or in too great a capacity (Van Helsing). This is just middle of the road.

And Ray, who was just a simpleton who owned a garage in town, was forced into being a vessel for all the evil in the bayou. Poor dude.
I did like all the creepiness that shooting in the swamplands of Louisiana affords a film, but poor conception along with the unfortunate situation of wrapping up filming just days before Katrina hit, made this one film that probably took a beating before it was even released. It wasn't awful, just unlucky. Oh, and more than a little cliched. 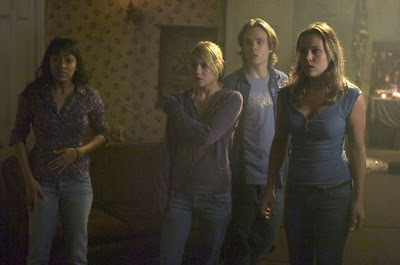 Laura Ramsey (The Ruins), Meagan Good (Saw V, The Unborn), D.J. Cotrona, and Pawel Szajda (Generation Kill) round out the cast, along with the most annoying actress of the century, Bijou Phillips (Hostel 2, It's Alive) - who I promised here never to watch in another movie because of the extreme distress she causes to my intelligence.

I hate her whiney voice, and seriously believe my cat could give a better performance. Prior to watching it, I had no idea she was in this movie - or the chance that I'd have even turned this on would be infinitesimal. Funny bit of irony: Bijou released an album in 1999. I'm sure she thought being the daughter of John Phillips would give her some clout. She named it 'I'd Rather Eat Glass', which is, in turn, just how I feel about seeing her on the big screen!

But alas, Venom is what it is. A simple slasher film trying to be more by having some spooky voodoo elements in it. I'm appalled that people found this anything other than formulatic and vapid. 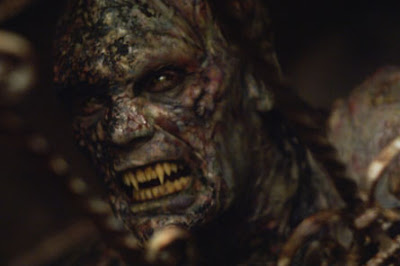 (Looks like a reject from a bad vamp movie to me.)

Oh, and the damn movie poster even ripped off similar films . Take a look. 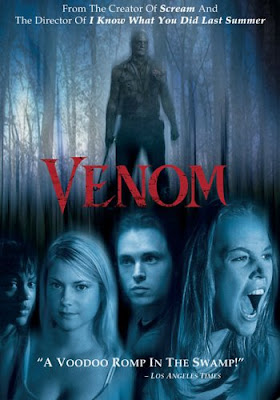 *For more horror movie poster look-a-likes, check out this fantastic array of similarities over at Monster Land. You'll be amazed.

Haha I never did get around to seeing this one. I'm in the mood for a generic early 2000's horror movie, so maybe I'll give it a shot.