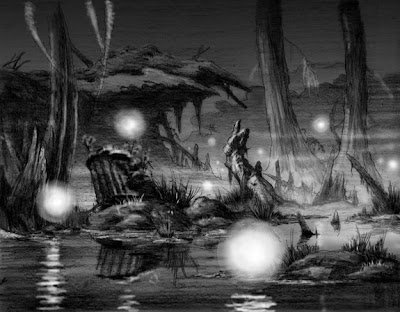 The flame is a favorite image in a gothic setting. It may come in the form of a candle, or perhaps a fireplace, or maybe even a campfire! Here are a few examples of creepy lights in folklore.

These spectral lights originated in Wales when St. David pleaded that his people were given a forewarning of death. He was answered by a vision that before a death, a mysterious candle would appear. This legend has remained popular in Britain and sightings have been reported all over the land. The candles are often seen dimly at a distance, and when you approach, they vanish. They hover over places were a death will occur, and appear to those who will either be the victim of death or a loved one of theirs. Different colors of the flame are believed to mean different things. For example, one candle symbolizes one death, so if there are multiple candles that means there will be multiple deaths. A large flame foretells the death of an adult, and a small blue flame the death of a child. 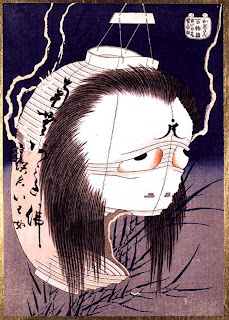 In Japanese this means "haunted lantern", and that's just what it is. The ghosts that inhabit these lanterns are thought to have died in a state of hatred or fury and are condemned to remain on earth. They float and have a long, whipping tongue and mad, rolling eyes.In Japan they have an extensive variety of spirits, creatures, demons and ghosts. The word for monster is "yokai", but Bakechochin aren't just regular yokai, they fit into their own special category. Tsukumogami are inanimate objects that have become exactly one-hundred years old and becomes animate. Yup, its crazy weird, I know, but that is why I love Japanese folklore. There are over a dozen types of Tsukumogami, a few others being umbrellas, tea kettles, clocks, rolls of cotton, straw sandals and--weirdest of all--mosquito nets. Be careful not to light one of these, if you do a ghost or demon might leap out at you! 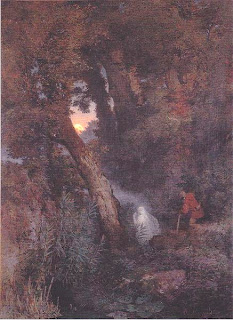 WILL O' THE WISP

This legend exists all over Europe, and a couple different stories exist around it, too. In any case they are small, bobbing balls of light that float in darkness over the land--commonly over graves or marshlands. There are two main explanations on what these lights are; one of them is that they are souls of the dead who appear when death is imminent (much like a corpse candle, eh?) and lead people home who are lost. The other is pretty much the opposite; that they are faery-folk who lead dazzled travelers until they become lost and then leave them in the darkness. I would be tempted to follow one, myself, but I wouldn't trust one if I were you!

Candles are creepy and beautiful and fun, and many superstitions exist about them. In Ancient Egypt--one of the oldest cultures known to use candles--they used candles to interpret dreams. There are a few death omens related to candles. For instance, British folklore says that if the wax burns around the candle (as opposed to dripping down the side), it means someone will die; likewise in America if a candle is left burning in an empty room, or in Germany when a wick splits. To reverse a death omen you must put the flame out under running water. You may enlist the help of a ghost to look for treasure if you light a sacred or blessed candle, and if a candle's flame is blue it means a ghost is in the room.
Posted by Christine Hadden at 10/04/2012