Fear Is Beneath Me: My Favorite Basements In Horror

Those who are regular readers of this blog (there are some out there, right?) know that I have a great love of lists. A penchant to categorize in every way imaginable. A need to sort, classify, and arrange. So it shouldn't be a surprise to find another list jumping out from the blog pages.

Basements to me, are the scariest damn places on earth.  Whereas some folks cringe to go up to their attic (and I'll admit that has to be the second scariest), I feel tension and anxiety when I'm forced to tread into what is really no more than a hole in the ground with some walls holding it up.  I'm not really afraid of my own basement (as I have a killer cat down there that protects me and makes sure no monsters are hiding there), but when I was a kid, my grandparent's basement scared the living hell out of me.  It was dark, had random light bulbs hanging down like the cellar in Psycho, a dreadful little bathroom stall tucked away in one corner, boasted the creepiest "root" cellar (yeah, my grandparents called it a root cellar instead of fruit cellar. Either way it's ominous.) in the lower 48 - with red walls like the goddamned Amityville Horror house, and last but not least, the room had an old table with dragon's heads for feet and I thought for sure someday they would come to life and attack me.  I read a lot of Stephen King as kid. 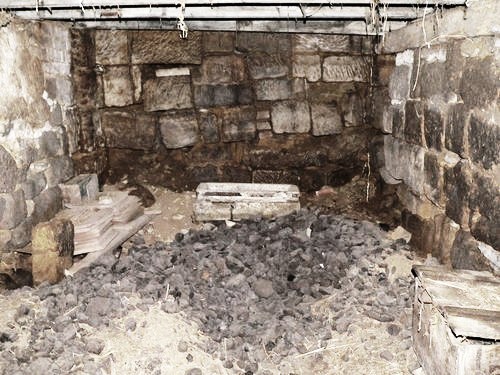 The basement in my parents house frightened the shit out of me too.  The furnace was a noisy monster all on its own, but there was a room off the one side that was a dirt-floor coal room (back when the house would have been heated by a coal furnace) and it looked like a good place for John Wayne Gacy to stash bodies. When it rained there would be water in one corner, and I could always imagine a body rising from the murky waters, hair plastered to their face, their eyes inhumanly blank and their mouths open in a silent scream. Yes, I really thought that every time I saw it. Still do.

Furthermore, as a teen my friends and I used to go haunted house hunting and many times entered dilapidated old houses out in the woods through the basement.  Don't even think of telling me that wasn't the freakiest thing ever. A house with no electric - hence, no lights - isolated out in the woods, with a rickety set up cellar steps up into the house and a dirt floor more often than not.  Very Evil Dead-ish, if I do say so myself. Suffice it to say we always brought extra flashlights! (And plenty of alcohol, truth be told.)

So there have been some very shuddersome basements in my past. Thankfully, I don't think any of them were quite as sinister as most of the basements on this list.  And with the new Evil Dead film coming out in just a few weeks, I couldn't resist a little list of cellars that spooked me most.

Great post! I am more of a 'creeped out by things looking in windows' sort of guy, but basements are a good creepy second. I was surprised you didn't mention the trailer to the upcoming film THE CONJOURING! I don't pee my pants often, but when I do....... *hahahaha*

Great post; wondering whether there is room for a followup (attics, bedrooms)?

Sidenote: you might be interested in Gaston Bachelard's book The Poetics of Space. Bachelard approaches (primarily) the domestic space in a philosophical manner, discussing the associations culture has with specific spaces and rooms (including basements)...

When I saw the title, I was hoping you'd mention Evil Dead!

I was definitely afraid of the basement in the first house we had when I was a kid. There was a old coal furnace, it was cold and damp, the ceiling was very low, and it just had a very ominous air to it. I think the light switch was at the bottom of the stairs, so you had to go all the way down in the dark. Pretty scary when you're five.

Cool post, I love that basement in The Amytiville Horror, that voice that comes out from the depths...spooky stuff!

Also, that very scene in The Blair Witch Project is so freaking chilling...to the bone!

I wish more people would see The Resurrected, such an underrated flick!

What an awesome idea for a list! It's been awhile since I've been around this haunt, but you never cease to impress Christine! :)

Craig: I too, am freaked out by the window thing. And also if there is something creepy standing in the background or at a distance, that is unnerving as well. I actually did a post on mirrors and windows - I think it's under "Bringing on the Fear" in the side column. And oh HELL yeah, that trailer for The Conjuring is a downright jump-scare!

Madelon: You know, there really should be a follow up, and I am absolutely going to take that into consideration. Attics are a given. Bedrooms can be scary as hell too- and I already have several in mind just thinking about it! Thanks for the thought, and for the book suggestion - sounds very interesting!

Pixie: But of course I HAD to mention the Evil Dead. It was actually the film that gave me the entire idea. Even when I finished the post, other film basements kept popping into my head!
And WTH? You had to go to the bottom of the stairs to turn on the light? I'd have been dead meat. I never could have managed it. (And that's a fracture waiting to happen if I've ever heard of it!)

Francisco: I keep trying to introduce people to The Resurrected. Fans of Lovecraft or Dan O'Bannon meander their way to it, but others have no idea. It's so atmospheric and spooky.
And I'm also glad I'm not the only sissy regarding The Blair Witch - damn that film made me fear my own basement for a week!

Rondal: Thanks, I had fun with this one! And thanks for the compliment. Glad you stopped by. Don't be a strange.... Wait...never mind :)

Another fantastic post. I should tell you my Amityville connection sometime.

I loved this post - sadly though, there aren't that many basements in my neck of the woods, though when I lived in Wales, the last house I stayed in had a basement. Many a horror film was watched down there while doing laundry and drinking wine. #goodtimes
I loved Marie's suggestion about the effect of electrical appliances and electro magnetic energy influencing how we think when in basements - and I'm also intrigued by Madelon's book suggestion. All thought provoking stuff.
Hope you do a follow up on attics... I still turn the light on as quickly as possible when venturing up into mine.

PS The basement Rose tip-toes into in Dario Argento's Inferno is probably my favourite basement in horror. So beautifully lit!

Marie: Thanks, love. Seems like I've been writing that one for weeks! And regarding the electrical equipment, that must be why I was so freaked in my grandparents basement. In addition to the washer, dryer, and furnace, my grandpap had all his woodworking machinery down there. Yikes!

James: Thanks! :)
Yes, I suppose when you dig deep enough over there you hit water a little sooner than over here, eh? Kudos to you for being able to watch horror films in a basement, that's quite a feat! I'd love to sit through something like Evil Dead while underground!

I can't believe I forgot the Inferno basement. I've thought of so many more since I wrote this post, perhaps there will be a part two of this one!