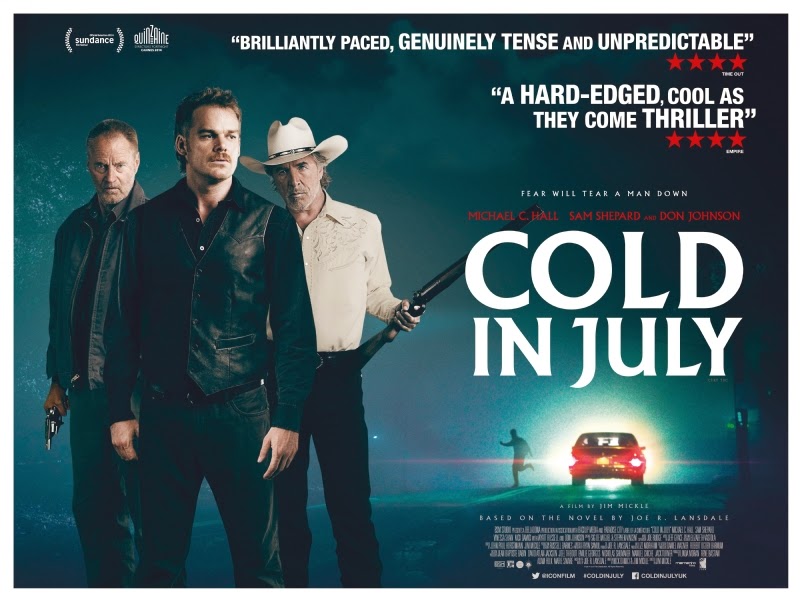 If you were wondering what kind of actor Michael C. Hall would be after Dexter and what kind of films he would choose, Cold in July is your answer.  Crime dramas never seem to go out of style, and casting Hall as an everyman that finds himself embroiled in a home invasion-turned conspiracy was a brilliant choice on director Jim Mickle's part.  Mickle is the force behind such horror fare as Mulberry Street (2006), Stakeland (2010), and the recent, well received remake We Are What We Are (2013), so he knows his way around the genre.  And while I certainly wouldn't call Cold in July a horror film, Mickle's experience made him a shoe-in to be both co-writer and behind the camera for this adaption of the 1989 Joe R. Lansdale novel. Set in 1989 east Texas, the movie opens with Richard Dane (Hall) being awoken in the middle of the night by his wife Ann (Vinessa Shaw, The Hills Have Eyes '06 - in case you can't recall where you've seen her!) when she hears a noise in their home.  Hall jumps up and quickly fumbles around until he finds his father's gun and cautiously creeps into the living room in the dark where he proceeds to surprise a burglar and in a fit of panic, shoots him dead.

As we were watching this, my husband quickly said that was exactly what he would do, because if someone breaks into your home, they mean you harm.  And I agreed.  Gone are the days in which people would try to call the police or see who the intruder is before killing them.  Nowadays it's just BAM!  It's all about protecting your family and home.  Shoot now, worry about the consequences later.

Oh and what consequences they are.  With a claret-stained couch, blood splattered walls, police throughout the house and a frightened family at his side, Richard learns that the man he shot dead is Freddy Russell, a wanted felon.  Officer Ray Price (co-writer Nick Damici) also informs him that Freddy's father, Ben, is also a career criminal who has just been released on parole.  Sufficiently rattled, Richard tries to console his wife and young son and they attempt to move on from the horror of that evening.  He and Ann are seen cleaning the bloody walls, picture frames, clocks, scrubbing stained carpet, and finally removing the stained couch.  Rarely are we privy to what actually happens after a violent death in a house.  The police don't clean up for you.  They don't send someone in.  YOU do it.  An atypical reminder of real life, well played here by Hall and Shaw. 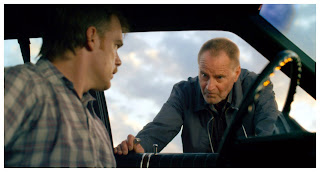 But Richard just can't let that horrible night die.  Still reeling over having shot a man to death, he shows up at the cemetery for the county-paid burial just in time to see them covering the gravesite.  When he turns back to drive away, Ben Russell (Sam Shepard) is at his car door, quick to make a veiled threat against Richard and his family, in particular his young son.  He rushes to the school to pick up his son, and upon arrival at home he notices the doors are open.  Rattled to the core he goes to the police, who set up protection for him as several officers lie in wait in the nearby woods to pounce on Ben and arrest him if he makes a move.  Trying to sleep, Richard senses something wrong and rushes out of his bedroom to find the stationed guard out cold and his son's room locked from the inside.  Cops rush in, but Ben has made his escape through a window - and they discover he had been inside the house in the attic crawlspace the whole time.

Where the film switches gears a bit is when Ben is apprehended just over the Mexican border and brought back to Texas, seemingly closing the chapter on Richard's nightmare.  But then at the police station making a final statement, he discovers a picture of Freddy Russell on the Most Wanted wall of shame - and realizes that is NOT the man he shot dead in his living room.  Officer Price shuts him down, saying he must be mistaken - it was dark, that the man he shot was definitely Freddy Russell.  But Richard again can't just let it go and eventually finds his way back to the station again, only to see Office Price and a few other officers leading Ben Russell out of the station and loading him into a car.  Richard follows behind and parks out of sight when they stop at an abandoned train station and dump an unconscious Ben Russell on the train tracks in the way of an oncoming train.

Confused and torn, Richard realizes something isn't right.  The man he killed was NOT Ben's son, and now the cops are obviously hiding something and trying to cover it up.  So he rushes out and pulls Ben off the tracks just in time.  He takes him to his father's secluded cabin, waits until he comes to and proceeds to tell him the unlikely story.  At first Ben reacts with complete disbelief - until he accompanies Richard to the cemetery where they unearth the body of what Ben thinks to be his son.  Upon the discovery that the man in the grave is unknown to him, Ben believes Richard and they start to devise a plan to uncover the truth. 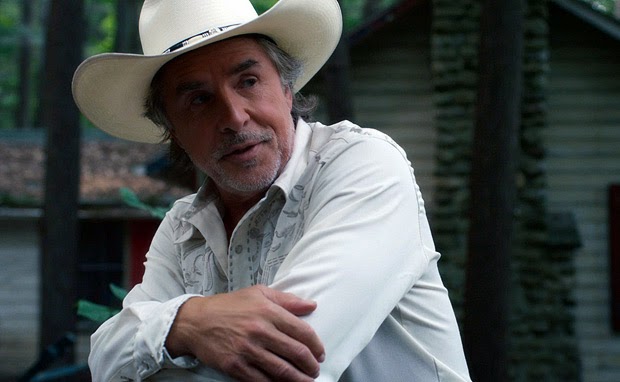 Ben calls a fellow Korean War vet friend of his, private detective Jim Bob Luke (played by the always charismatic Don Johnson), who after some digging reveals that Freddy Russell was involved with the Dixie Mafia, has a price on his head because he turned state's evidence against them and has been in the Witness Protection program as of late.  The unlikely trio of Ben, Jim Bob and Richard take off in Jim Bob's caddy in search of clues, which has them landing head-first in a jumble of criminal activity when they discover Freddy makes a living by participating in snuff films.

This is a film that at first feels a lot like Cape Fear, until it doesn't.  I'm not saying it morphs into 8MM, but it's obvious at the beginning of the movie that Richard's family is in danger from Ben, who is anxious to rectify the death of his son.  But then the tables turn and the two become allies in a conspiracy that will drag them into the dark bowels of the human condition. 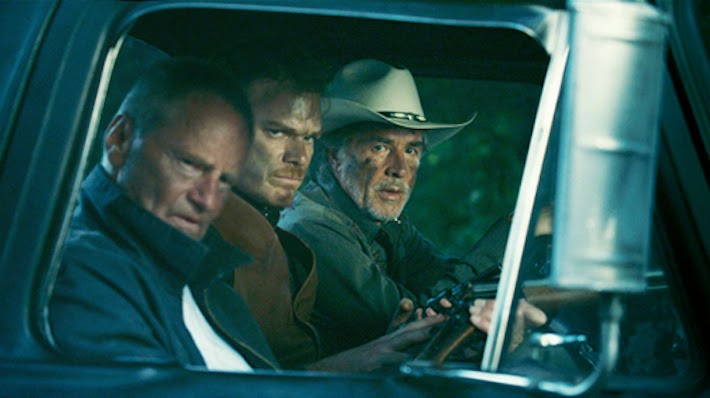 I loved seeing Michael C. Hall in a role that allowed him to show true emotion, instead of being just a cold-blooded, soulless serial killer.  He is as skilled at playing a run-of-the-mill family man as he is a heartless murderer, and he's got wonderful range to go along with his expressive eyes and talent for speaking without saying a word.  Sam Shepard is his usual low-key self, which serves him well when addressing Hall's character with a cold, unfeeling vengeance, yet he is able to turn a corner and befriend Richard when he realizes he's a good man who was taken advantage of just as much as he was.  And what can I say about Don Johnson that hasn't already been said?  It's so fun to see him play a bombastic character like this.  He's always able to rein in the swarm just enough to be utterly engaging and likeable.

I also must mention the score, which smacks of John Carpenter (though composed by Jeff Grace) and feels absolutely 80's with its synth vibes following all the action on the screen in chilling perfection.

If you like films like the aforementioned Cape Fear, A History of Violence, and the more recent Prisoners and Blue Ruin, you're bound to enjoy this pulpy thriller.  I can't wait to see what Jim Mickle has in store for us next!

I actually think crime drama's ARE out-moded now just like musicals and westerns.

Glad you liked this one Christine. I was able to check it out a few months at a convention. While it was a horror filn, which the convention was so seemed like an odd choice, it was one of my favorites all the same.

Anon: I don't think crime dramas will ever go out of style. They have their audience and will continue to have one.

Heather: It really does have some great horror elements to it, yet non-horror fans will find something to enjoy as well...