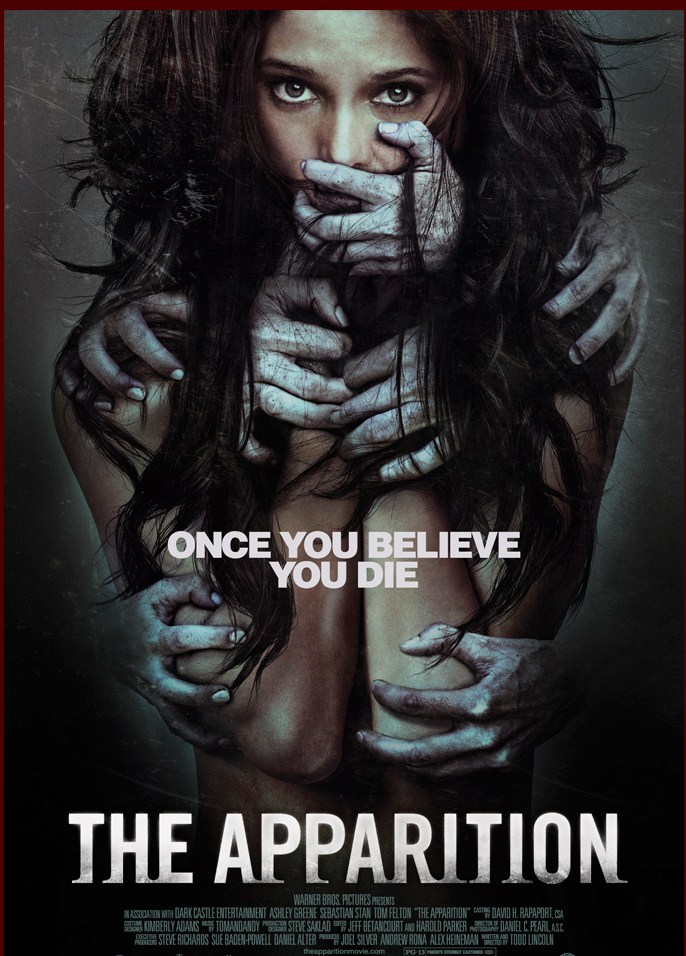 It has become increasingly apparent to me that there are no good ghost stories anymore.  I'm sick as hell of renting (and at times purchasing) horrific examples of supernatural films that are infinitely less scary than the DMV on a Monday morning.  Case in point:  The Apparition.

Even though I knew it was going to be awful, I still rented this flaming sack of cow dung just to see how bad it really was. Well, it's a boring, utterly ghastly (and not in a good way) movie about a couple that are house sitting a property that belongs to the girl's parents. Said girl - Kelly - is played by the very pretty Ashley Greene of Twilight fame, with boyfriend Ben (Sebastian Stan) hanging the moon for her pleasure.

At the very beginning of the movie we see Ben, doing his best ghost hunter impression with a few other like-minded folks...except they bring something back (from beyond....um, yeah - that's original) that is now following them, including our guy Ben. Which means Kelly is in trouble too, as it has emerged as a force to reckon with at their current living space.

When the neighbors loveable dog finds his way into the couple's home, lies down in their laundry room and promptly dies, I knew this film was not for me. (What makes filmmakers feel the need to off the family pet? Do they think that serves some purpose in the film - as if "Wow! They killed the cat/dog/horse/bunny/gerbil, etc! I'm REALLY afraid now!" - It's more like, I'm pissed and probably never going to watch your crappy excuse for a movie again, god dammit!)  And that only served as proof that The Apparition was bound to get worse.  The couple does so many stupid and ill-advised things, acts that are so clichéd it's nearly unwatchable. No originality and lack of plot plague many films these days, but I would be hard-pressed to find one so blatantly trite and unimaginative as this dud.  I really can't say much about it because though it's trying to be a ghost story, it's failing miserably and NOTHING IS HAPPENING!

The two leads are trying here, and it can be said that they did give it the old college try. But though they may be good in other films, they struggled to hit the mediocre mark here. It was almost laughable how many ridiculous facial expressions Ashley Greene delivered.  Funny thing is, they all ended up virtually the same. All looking somewhere in between constipated and bored to tears.  LIKE ME.
Thankfully for the male viewers of the film, she showed a bit of skin.


Plainly said, this movie is so outright boring that I was actually writing this review as I suffered through it.  All we were subjected to were loud noises, lights flashing off & on, some carefully placed shrieking, doors opening by themselves, and strange molds growing on the floors, ceilings, and of course in the basement. (Why do spirits these days feel the need to manifest as MOLD?  Try something less icky next time!) Kelly finds out Ben was lying to her (which in all actuality he just 'didn't tell her' all about his past spook hunting and "scientific supernatural studies") and she swiftly kicks him out of the house - leaving her alone to face the ghost/demon/entity of the week all by her lonesome. Have we learned nothing from watching past horror films!?

Friends, we can do so much better than this. We HAVE done better. See The Changeling, The Haunting, The Legend of Hell House... Christ I'll admit even The Grudge and Paranormal Activity were better.  I just don't get why studios keep green-lighting dumb-ass movies like these ones. I was so disinterested in this about ten minutes in that I nearly turned it off. Figured I'd keep  watching so I'd have something to write about! Shitty crap like this, Pulse, The Fog (2005), The Unborn, and the vast array of junk available that are trying to pass themselves off as scary are doing nothing but killing the sub-genre.

Where are movies like The Woman in Black (1989)? The Innocents?  The Devil's Backbone? Though a rare gem breaks through occasionally, such as The Awakening, most ghost stories are just bullshit.  Why aren't studios trying to find someone who will adapt something truly chilling, like any number of works by Ambrose Bierce or M.R. James??  I read two awesome books by John Harwood last year - The Seance and The Ghost Writer (not the one adapted into the Ewan McGregor film)- both if which seem fairly adaptable to me, and would translate to film fantastically. The Seance would be a wonderful period ghost story that would float the boat of any fan of the supernatural.   But instead we are forced to watch this regurgitated dreck that wouldn't scare a two year old. Gah!!
So believe me when I tell you - don't watch this movie unless you are faced with making the decision to either watch this film or watch paint dry.
I know what I would choose.
Posted by Christine Hadden at 1/07/2013

I think that what filmmakers forget when it comes to ghost stories is that the less seen, the better. The more you can keep your audience guessing, the stronger your work will be. People who would watch a ghost story film are often on the fence about the entire topic anyway, and that should be played to. "Is this real or in the character's head?" That can do wonders.

Might I try to make a recommendation? Ghost movies are undoubtedly my favorite so I'm always looking for the next good one too (and have been disappointed by a lot of them lately). I've got a review coming up soon for a movie called The Pact, and I gotta tell you, I freaking loved it. Formulaic on some level, but also really well done and effective, with a fantastic twist. I think you should at least give it a shot if you haven't.

Lovely Molly is also an interesting one, but it never really shouted "ghost movie" as much to me.

I. completely. agree. I would write more but I have the flu. Love the blog.

Hollywood will always put out generic, cookie cutter horror films with CW Network-level casting. Just how it is. Independent horror(that doesn't suck) is our best hope.

But yes, The Woman in Black(89) and The Innocents are amazing. So is Whistle and I'll Come to You(68) and Ghost Story (81). Both terrifying!

Doug: Absolutely agree - the less seen the better. Just a glimpse of "maybe something" in a corner, a reflection in a mirror, etc. Instead of throwing all the cards on the table or going for blood and gore - both of which are unacceptable in my humble opinion.

Michele: So I want to thank you so much for the recommendation of The Pact. I had heard of it but somehow never got my hands on it. I took your advice and bought it outright. Watched it last night and loved it as well. Yes, there were some moments of "haven't I seen this done before?" but I enjoyed the hell out of it. And it spooked me out, which is what I'm looking for. Something that makes me shut my eyes tight when I go to bed so I can't see the shadows in the hallway! Thanks again!!

Ongoingly: Thanks for reading and I hope you are feeling better!

Trevor: I love Whistle and I'll come to you, despite having to see it on YouTube because I live here in America. Ghost Story has LONG been one of my most favorite movies! I've loved it from waaaay back.

Michele, I saw the Pact but was very confused at the end of it. Ghost story or not??

Christine: Ah, so happy you loved it! Wasn't sure if it was one you'd be impressed with or not.

Marie: See, that's the thing I loved about this movie - it's part ghost story, part not. There is the ghost of the murdered girl in the house, but not all of the strange happenings in the house were her - some of it was Judas. Like in the beginning when the little girl says "Mommy who's that behind you?", that wasn't the ghost, it was Judas coming out of the closet, see? Makes a rewatch interesting.