Mindless Movie Monday: Hypothermia: So Painful It's Funny (the movie, not the condition) 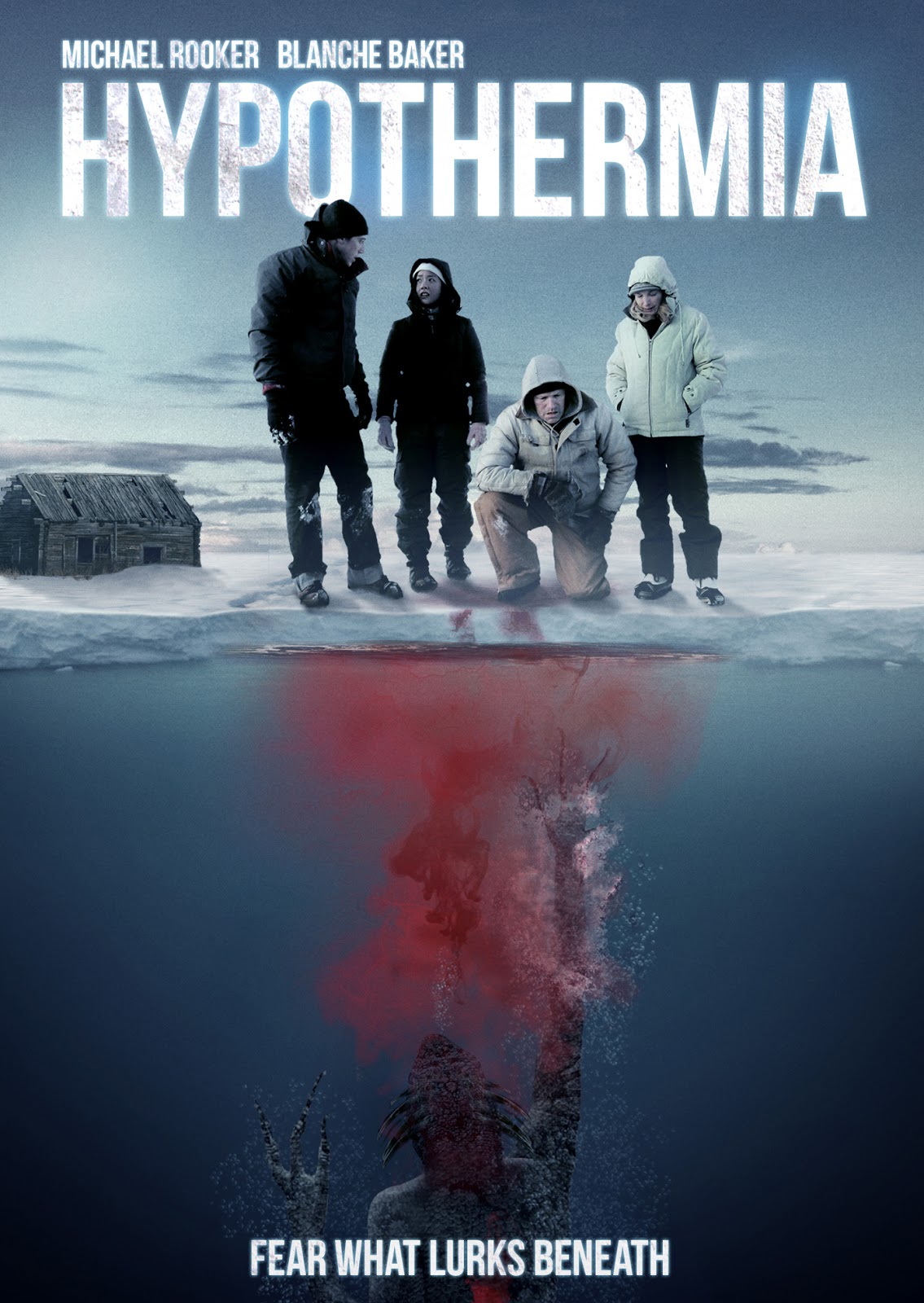 In keeping with our 'winter horror' theme, I give you one of the worst movies I have seen in several years.

Hypothermia is a frozen romp of ridiculous proportions that has only one good thing going for it.  Michael Rooker. He is the glue that (tries) to hold this lame-ass film together, which is insanely difficult given the absolutely absurd "monster" that is terrorizing the group of ice-fishermen in this horrible film.

Larry Fessenden, director of such other snowy delights as Wendigo and The Last Winter, obviously has some sort of real fetish with winter settings for his films.  And though I've seen both Wendigo and The Last Winter and enjoyed them (the former more than the latter), this film really left a lot to be desired. Low budget or not, Fessenden was really phoning this one in. 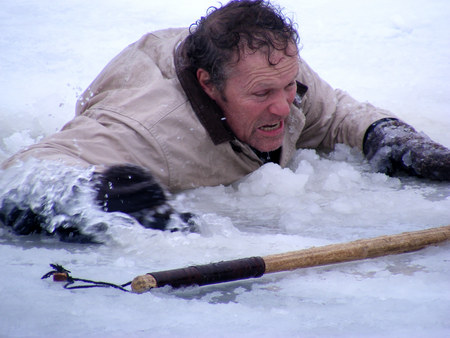 Ray Pelletier (Rooker), his wife Helen (Blanch Baker), son David (Benjamin Hugh Abel Forster), and David's girlfriend Gina (Amy Chang) have rented a lakeside cottage for a fun weekend of ice-fishing. I suppose this constitutes as fun in some circles.  I prefer to fish when it is above 50 degrees - or better yet at the seafood department of my local supermarket.
When we first meet Ray, he's out on the ice, trying to find a good spot for the next day's adventure in ice fishing.  Whether not paying attention or pure accident, Ray falls through a think place in the ice and if son David hadn't come looking would have certainly died of hypothermia (hence the name, natch). 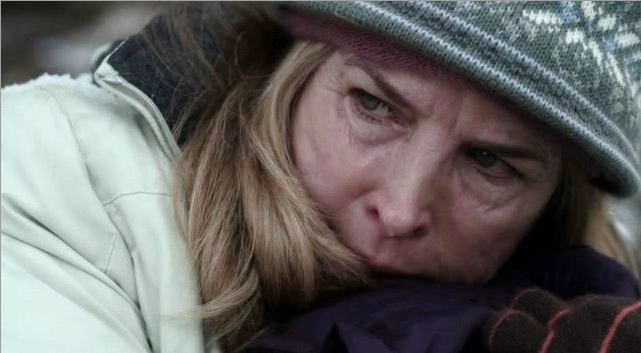 At first, I couldn't recall where I'd seen Baker, until some internet investigating turned up the fact that she played Ruth Chandler in The Girl Next Door - a film I hated passionately. So that didn't help her case. She was seriously hard to watch in this movie, her acting totally wooden and inept. The actor portraying David has next to no emotion in his acting and so I'd have to say it was rather painful to watch him also. Chang did a decent job as Gina, so I was hoping there would be a scenario in which she and Rooker were the last ones standing.

But there were two more cast members to speak of.  Once Ray and Co. set up their little camp upon the ice and settle in to have bologna sandwiches and idle chatter, their solace is interrupted by an utterly obnoxious fisherman and his son who roll in with a big truck towing a camper trailer and snowmobiles. Steve Cote (Don Wood) and Stevie (Greg Finley) like to drink a lot of beer and eventually shout across the lake for Ray and his family to join them.  Steve has a New York/New Jersey mindset, with the accent to complete it. He thinks he's all that and a bag of potato chips and is unforgivably annoying. And loud, dammit.

Knowing if they don't make an appearance at the Cote trailer, the father-son team probably won't ever shut the hell up.  They make their way over and discuss the fact that there don't seem to be any fish in the lake.
What the hell happened to all the fish? They ponder this for way too long until they see something ominously large under the surface of the lake go swimming by, which causes a ruckus among the men and in a moment of stupidity Stevie sticks his hand into the water only to have the giant fish rake his sharp fin over his arm, tearing it open. 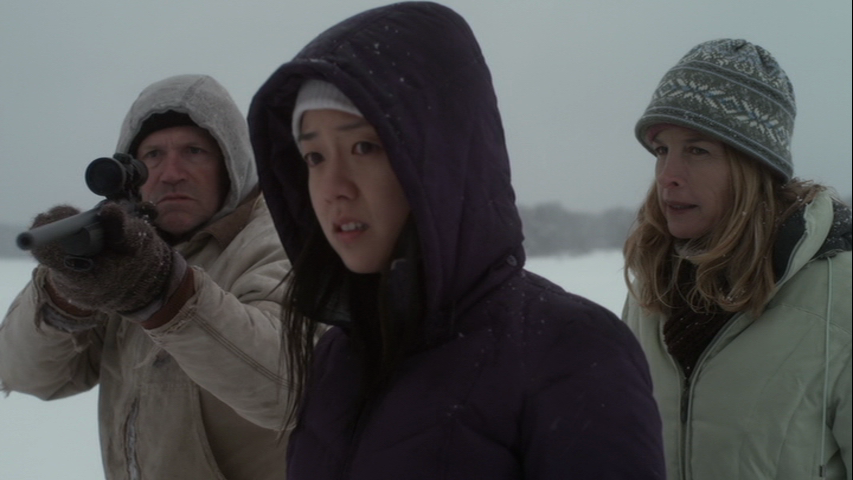 Speaking of stupid acts, older Steve feels it unnecessary to take his son to the hospital, preferring instead to man-up and have a steak dinner.  Gina (who apparently has some medical training) cleans up Stevie's wound (which is practically festering at this point) and the men step outside to see if they can "catch this bitch!"
We see a lot of the fish-monster swimming just under the ice, and as you can imagine, the group starts dwindling as people start to die.
Despite all this foolishness, I can't say Michael Rooker does a bad job. In fact, he acts his pants off - giving his all to a pointless script. And while nothing can save the preposterous circumstances the cast finds themselves in, at least there is a bit of decent gore in here to get the audience by.

But here's what puts the nail in the proverbial coffin.  The monster is completely and utterly ridiculous. It is like a cross between the Creature from the Black Lagoon, a Sleestak, and the Cheshire Cat. I really cannot stress how thoroughly hilarious this "creature" is. If I thought it was a worthwhile film, I wouldn't show you what he looks like, so the element of surprise would still be there.  But forgive me I just can't help myself.
Witness if you will, the most laughable monster in film, perhaps ever. 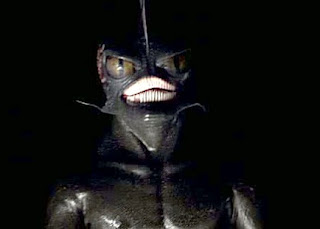 I'm not sure what else I really need to say here, except that despite the fact that the body count keeps on rising it doesn't seem to deter our deadly aquatic creature from using his Crest Whitestrips.  He's got the nicest smile from here to Okinawa.

You almost need to SEE the movie, just to laugh at how incredibly hilarious this monster is. It is entirely fake-looking, to the umpth degree! Bah!
Actually if the monster wouldn't have been so stupid, the film wouldn't have crashed and burned its way into Mindless Movie Monday territory!