Kinky Sex And Horror. You KNOW You Wanna Read This Post ~ So Just Do It... 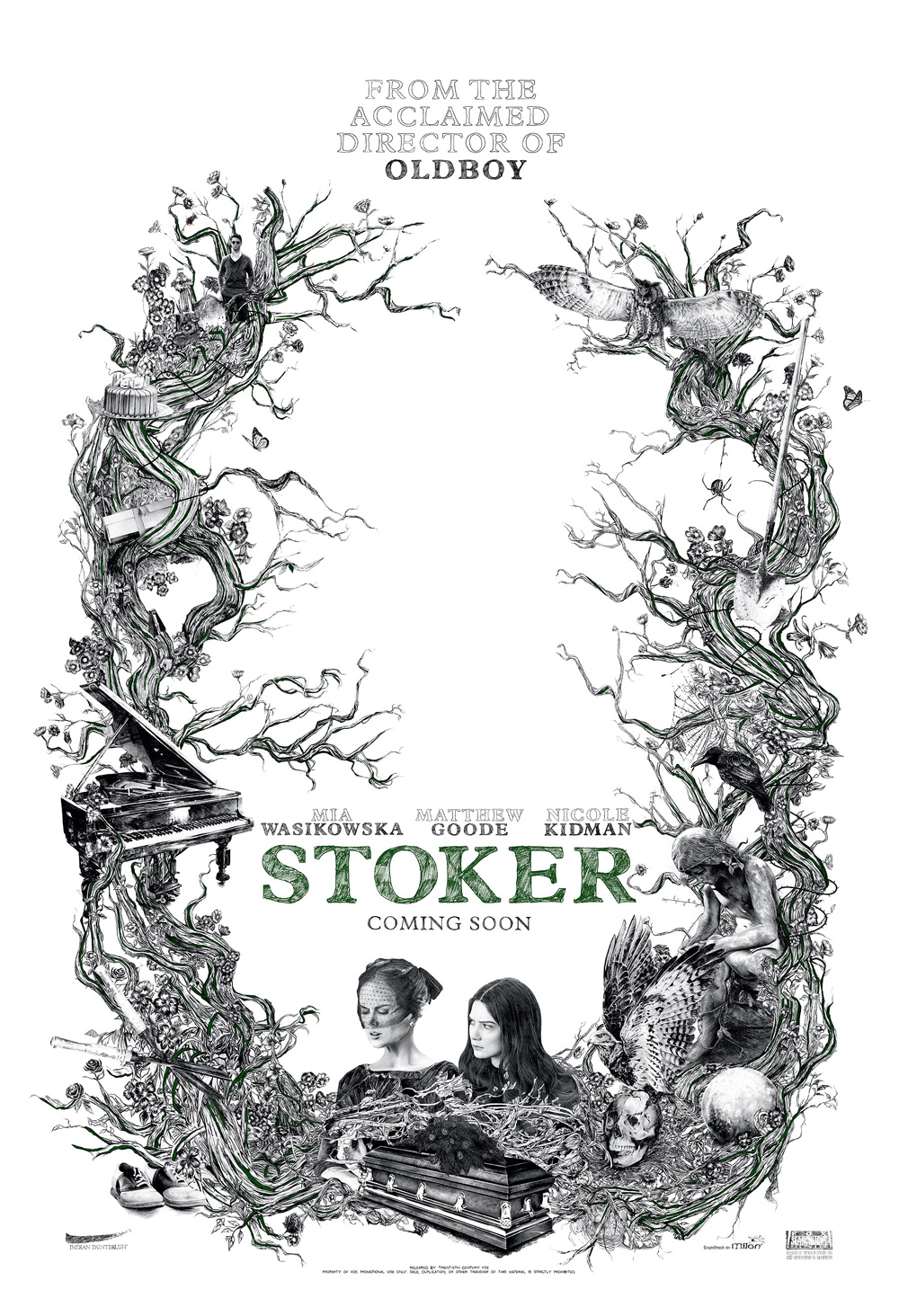 I  (Marie here) attended a screening of director Park Chan-wook's (Old Boy, Thirst) new film, "Stoker" the other day and boy did I love it. If you are familiar with his work, you have an idea of the mastery of this powerhouse filmmaker.

Although he doesn't write the original stories for the films he directs, he seems to have a specific taste, and one of the recurring subjects he deals with is unconventional sexuality.

Stoker stars Mia Wasikowska as India Stoker, an 18-year-old girl whose father has died suddenly in an accident. An uncle (Matthew Goode) she never previously new to exist comes to live with her and her cold, caustic mother (Nicole Kidman). He is an unpredictable and mysterious character who India soon becomes infatuated with.

Without spoiling anything, I will just say that there are many examples of strange sex in this film, some that will make you cringe or say, "Ew", but is undeniably interesting.
What gets some people off may seem strange and we often feel the need to search for roots and reasons to explain such, but when it comes down to it these are our most primal thoughts and feelings.

Let's take this opportunity to explore some (mostly) horror films that deal with taboo sex. Christine has helped me out with a few additions as well.


There are so many other films that are sexually distressing and entirely interesting - such as Lost Highway, A Serbian Film, Blue Velvet, Teeth, and Cat People(1982)  to name a few...Perhaps a Part 2 will be forthcoming...

This is one kickass list right here. A lot of my personal favorites. I've yet to see Kissed, but I've always wanted to. Excision will be purchased shortly. I love movies like this, and you know, the weirder they are the better too! Which is probably why I like Eyes Wide Shut so much. Though not a horror film it definitely belongs in every horror film collector's uhh.. collection.

The television screen is the
retina of the minds eye,

there-fore the television screen
is part of the physical structure
of the brain,

there-fore whatever appears on
the television screen emerges as
raw experience for those who
watch it,

there-fore television is reality
and reality is less than
television.

Drunketh: Thanks for reading! I think we're going to do a part two, so keep your eyes open ;)


Brian: Um, ok. But perhaps you should know that therefore is one word, it's not hyphenated. Therefore, you've made less of an impact.

Christine, that is rather cheeky (and pathetic if you dont mind me saying so), i mean trying to diminish and belittle the magnitude and importance of what i said by nit-picking about a slight spelling error, perhaps you`re scared and frightened by "the truth" my dear like 7 billion other poor sods around the world ! ! !.

Yeah, that must be it.

Christine, i`ve got a sneaking suspicion that Brian O'Blivion is Jervaise Brooke Hamster, that rodent must be really crazy about you darlin`, hes now posing as characters from movies just to have a conversation with you. I agree by the way, i think you`re a gorgeous little sex-pot as well.

Yes Teddy, that thought had already occurred to me. And I've got a sneaking suspicion that Teddy and JBH are one in the same. I didn't just fall off the turnip truck...

I visit this site for two reasons: (a) the reveiws here are quite superb, and, (b) the site is run by one of the hottest babes i`ve ever seen.

He realizes he is messing with girls who are obsessed with blood and gore, right?!