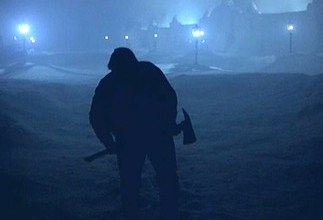 The idea for a two-week span of winter-focused horror isn't hard to imagine with the winter we've been having.

Here in western PA, it's been downright nasty, with heaps of snow, ice, freezing rain, and plenty of frigid temps - the kind of cold air that freezes your nostrils when you step outside.

Not sure it's been as bad in St. Louis where Marie is, but winter is winter - and we thought it'd be fun to set aside some time this year to highlight the frosty season.

There are just SO many films to talk about that it's a sure thing that all of them will not be mentioned, but we wanted to spotlight as many as we can in these two weeks, so we're splitting them into parts.

Best of all, we've got some help from across the pond for our fortnight of fun.  Belfast-based writer James Gracey of the fantastic blog Behind the Couch has agreed to help us out by writing about some of our chosen films. If you've never visited Behind the Couch, you simply must.  James writes some of the most insightful, astute, and absorbing reviews on the interwebz. Plus he's a really good friend, so I'd like to personally thank him for his most gracious gift of time.  I know that besides his terrific blog (and in addition to his actual day job), he's busy writing for such quality publications as Paracinema , Diabolique, and Exquisite Terror, among others.  Savor his words, folks.  He knows what he's talking about here.

So onward with the first installment of frosty flicks that you can turn to on a cold winter's night - or spend an entire shivery weekend with when you're snowbound and trying to fend off the cabin fever.....

No list of winter horrors would be complete without the first film many think of when categorizing snowbound frights.  A former school teacher takes his wife and young son to the Overlook Hotel, a resort high in the Rockies that is regrettably located on an Indian burial ground.  Jack Torrance has been hired as the winter caretaker because the hotel becomes completely snowed in during the winter and getting up the Sidewinder Mt is a sheer impossibility.   As the temperature drops and the snow begins to pile up, Jack also has his own worries that don’t include whether the boiler is functioning alright.  Meanwhile, their strangely psychic son begins to sense something is very, VERY wrong at the Overlook.  While the film has subtle hints of terror throughout, it also gives us violent bursts of horror near the end with Jack beginning to lose his sense of reality as the frigid wind and endless snowfall make it impossible to leave the hotel.  The final act of the film - the chase through the snow-covered hedge maze - are terrifying and show just how well Kubrick has planned out the frosty ending. /CH

A group of friends on a snowboarding excursion in deepest, whitest Norway seek refuge in a seemingly abandoned hotel after an accident. As a snowstorm howls outside, it soon becomes apparent to the group that they are not alone in the hotel… Deft execution, detailed characterisation, a deeply eerie atmosphere and brutally cold location sets this apart from the plethora of post-Scream slashers. A slow-building sense of dread and isolation is evident from the get-go and Cold Prey benefits from a script that consistently subverts expectations. When the group discover they are not alone at the draughty hotel, they do everything they’re supposed to: stick together, try to formulate a reasonable plan, arm themselves and support each other. Of course, they’re still doomed, but at least it’s refreshing to see characters in a slasher film use their heads. Consistently cranking up the tension and icy atmospherics, offering us an imposing killer and featuring a damn good final girl in Jannicke (Ingrid Bolsø Berdal) – Cold Prey is one of the most compelling, suspenseful and freezing slashers in recent memory./JG

Nothing says snowbound like being in the remote Arctic, even if it‘s your job. The fight to drill in the Alaskan wilderness heats up as a group of oil company employees start to experience strange occurrences at their site. The frozen tundra is the perfect place to have the eyes play tricks on you. Various members of the team start to hallucinate, even going as far as to wander outside in the Arctic temperatures - naked. What is out there in the snow?  The spirit of the Wendigo seems to make an appearance here as a catalyst between man and nature - and how the Earth might possibly be letting us know she’s had enough of our relentless ignoring of the environment. A slow burn, for sure - but if you can stick with it, everything but the very end is relatively unsettling, and the claustrophobia of being stuck together for a long period of time takes its toll./CH 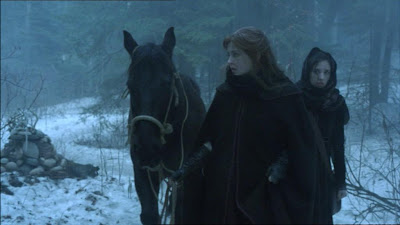 A horror sequel that not only matches its predecessor in terms of quality and originality, but one that also expands and further explores the original story, is a rare thing. Ginger Snaps Back is one such sequel. While the first film tells of a young woman who is attacked by a werewolf on the night she begins to menstruate, and its sequel follows the plight of her similarly afflicted sister, this unexpected third instalment transports the story back to 19th Century Canada. Two sisters, Brigette and Ginger, seek refuge from the grip of winter in a traders' fort which comes under siege by a group of savage werewolves. Like its forbearers, this film locks together menstrual cycles and lycanthropy to reflect on monstrous pubescence and darkly humorous body-horror. Not just a rehash of the first film, Ginger Snaps Back has more than a few surprises up its fine-furred sleeve. By confining the story to a single location, the events boast a tremendous sense of desperation and claustrophobia, as cabin fever and snowstorms reach fever pitch, and all is enrobed in a wintry, desolate and utterly chilling atmosphere. /JG

More environmental distress. Research scientists in the Arctic discover a wooly mammoth frozen in the ice and snow. Intrigued but cautious, the team tranquilizes a polar bear nearby which promptly dies when they get it back to their research station.  Soon after, members of the team fall ill with a mysterious malady just about the time lead scientist David (Val Kilmer)'s daughter (Martha MacIssac) arrives as an intern.  Deducing that the polar bear had apparently been feeding off the thawing mammoth, they also discover a bizarre bug was thawed along with it and apparently infected the polar bear. Hence, several members of the team have now been contaminated.  Attempting to be a cautionary tale about global warming and sticking your nose where it doesn't belong, The Thaw is a surprisingly effective creep-fest that will have you thinking. /CH 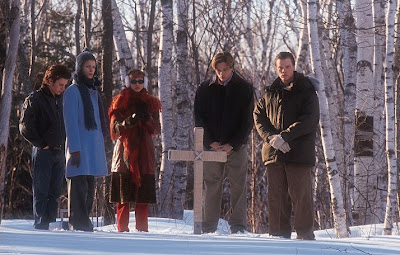 Whether viewed as a dark and despairing critique of contemporary society’s obsession with voyeurism and ‘reality TV’, or a tightly wound, slow-burning slasher, My Little Eye is an effective shocker that succeeds admirably on all levels. A group of strangers audition for a Big Brother style web-series in which they are required to stay at a remote house in the middle of snowbound nowhere, while their every move is recorded by myriad CCTV cameras throughout the house and broadcast to viewers of a private website. Events take a turn for the sinister when the group realise the site they’re being broadcast on is a snuff site… It’s bad enough that the group take their time to realise something suspicious and deeply sinister is afoot, and that they are so isolated, but to top it all off, they’re entrenched in boundless snow and freezing temperatures, making their odds of hiking out of the house pretty much impossible. Bloody murders, paranoia, creepy night-vision camera work and the notion that someone or something is ‘out there’ in the dark snowy night wrap My Little Eye in an icy, claustrophobic grip that refuses to relent./JG

Nice! Some I was thinking of as soon as i saw the post title, and others I've never heard of. Adding The Thaw and My Little Eye to my queue now!

You might have left it out because it is so obvious, but what about "The Thing"?

Emily: Thanks! There's more where those come from...stay tuned!

Jason: That's why at the beginning of the article I said there were too many films for just one post....
Again, stay tuned...