Horror Quotes: How mad are your skills?

So, how good are your horror trivia skills? Your talent at remembering quotes?
We all talk in movie quotes at one time or another, but when it comes down to it - how much do you put to memory?

I saw this on Facebook and thought I'd post it here instead.
The deal on FB was to pick twenty of your fave movies and find quotes (on IMDB or the likes) and post them for people to guess.
So I thought a horror version might be cool.

I'll start off easy. But I'm not gonna do any "You're gonna need a bigger boat" or "Wanna play a game?".... way too simple.
And yes, this pic is sure enough from one of the flicks. 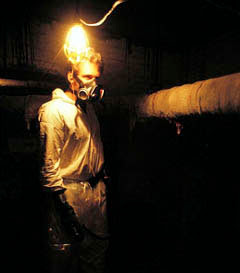 2) "It's totally insane. We have three new cheers to learn in the morning, the game is in the afternoon, I have to get my hair done at five, and the dance is at eight! I'll be totally wiped out!"

3) "You listen to me, and you listen good! I am gonna kill every member of your family! I'm gonna hunt them down like the animals they are, and I'm gonna skin em' alive! They are going to feel the pain and suffering of every last victim! They're gonna crawl on on their hands and knees, and they're gonna beg me for mercy! But all I'm gonna have for them is pain! Pain and death! "

5) "What's the point they're all the same, some stupid killer stalking some big-breasted girl who can't act who is always running up the stairs when she should be running out the front door, it's insulting. "

6) "He vould have an enormous schwanzstucker."

7) "Samhain, also known as All Hallows' Eve, also known as Halloween. Pre-dating Christianity, the Celtic holiday was celebrated on the one night between autumn and winter when the barrier between the living and the dead was thinnest, and often involved rituals that included human sacrifice."

8) "How'd we get into the sex crime business anyway? My brother, Saul, a plumber, makes twice as much money as I do and gets three weeks vacation too."

13) "I don't think so. We just cut up our girlfriend with a chainsaw. Does that sound "fine"?"

14) "Did they look like psychos? Is that what they looked like? They were vampires. Psychos do not explode when sunlight hits them, I don't give a fuck how crazy they are!"

15) "You know what I think? I think that we're all in our private traps, clamped in them, and none of us can ever get out. We scratch and we claw, but only at the air, only at each other, and for all of it, we never budge an inch."

16) "Woe be unto him who opens one of the seven gateways to Hell, because through that gateway, evil will invade the world."

17) "Amputate a man's leg and he can still feel it tickling. Tell me, mum, when your little girl is on the slab, where will it tickle you?"

*"That house is not fit to live in. No one's been able to live in it. It doesn't want people."

*"Dance with me, you little toad."

So, there you go.
And if anyone gets them all, I'll know you're cheating. No one's that good. (And if they are, I should have married them.)

Oooh, this is like catnip. I'm only gonna guess the ones I'm sure about...

And, hey - I know the bonus ones!
The Changeling and Ghost Story

Drats I thought 11 was the Devil's Rejects.

I'm only guessing this because I just watched it, but is 16 The Beyond?

2 is Halloween. Oh P.J. Soles, I don't think you have enough to do tomorrow. :P

Senski is pretty much a hero. And Andre you're right about # 16 - The Beyond.
Melissa - kudos to the Halloween (#2). Hard to find a quote from that flick that everyone doesn't recognize.

#4 and #11 - still awaiting detection. Should have made them the bonus ones, eh?

Yep, Angel Heart is correct;) And that film is truly screwed up.

Yes, #4 is Secret Window.
Think we got them all now. May do a round two at some point. I'm sure I could do harder ones...