The Thaw: So that's what happened to the dinosaurs! 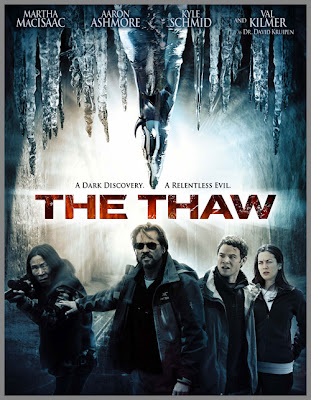 How to describe 'The Thaw' without sounding like a total idiot? Here goes. 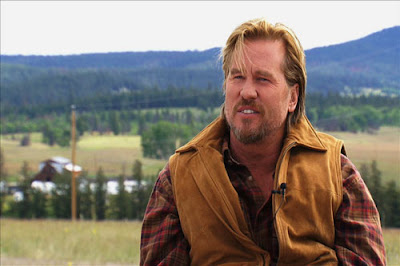 Val Kilmer is Dr. David Kruipen, a scientist who leads a research team to the Arctic where they discover the thawing remains of a Woolly Mammoth (albeit the smallest one I've ever seen on tv or film). Unfortunately, the Mammoth isn't the only thing defrosting. A prehistoric parasite finds its way out of said creature as well.

The team is isolated from civilization when they discover the creepy bug is spreading throughout the station like a wildfire, with the potential to be a global disaster of epic proportions. They allude to the fact that it is possibly what happened all those thousands of years ago during the last ice age to end life as the dinosaurs knew it.
They go as far as to bring a contaminated polar bear back to the lab to study, which is stupid move number one.

"We're gonna need a Yankee candle or something in here..."

The next thing you know, people are getting infected, and being a horror film, it's fairly offensive.
You see, the bugs bite you and then lay eggs under your skin, which turn into larvae and then the finished product, which is like a cross between a roach, centipede, and earwig. In other words, gross.
And there's not just one of them. There are millions.

Apparently a reject from a J-Horror film. 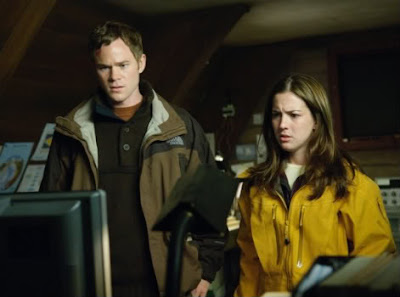 "Did Kanye just steal her award?"

Naturally, they start putting the pieces together fairly quickly - hard not to when your friends are either peeing blood or spewing up bile. There's a pretty nasty scene involving an arm and a meat cleaver, for all you gore-hounds.

The only actor besides Val Kilmer (whom I have really only enjoyed in one film, Tombstone) that I knew was Kyle Schmid, who was in the vampire series, Blood Ties.
IMDB says the lead chick, Evelyn (Martha MacIsaac) was in The Last House on the Left remake - she must have played the friend - ? 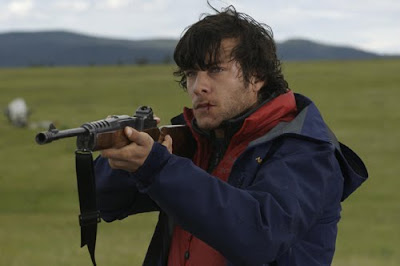 "If only I had my fangs back I could take care of this shit."

There is an extremely pertinent message trying to be displayed here, and I agree with a review I read that stated 'if Al Gore made a horror movie this would be it." Global warming is the main aggressor here, and it pretty much spells that out for you within the first ten minutes.

I have to assume anyone with a scientific background will laugh this film off heartily, but I disagree with those who say it's bad. As far as bug-of-the-month movies go, I actually thought it was pretty good. Sometimes you just need to forget reality and use your damn imagination, okay?

Some people say it's been done already, with 'The Thing'... well, while 'The Thing' is a vastly superior movie, it was made in 1982. I think there is room for another -we're stuck in the isolated Arctic Circle with something we don't understand that could kill off the world - kind of movie. It is one part The Thing, one part Splinter, one part Slither and one part The Last Winter. There's your comparison, if I must. 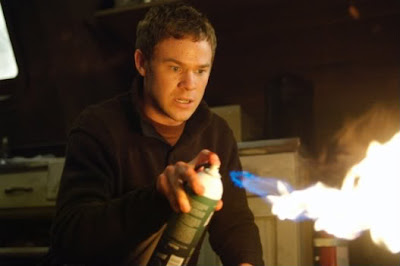 The DVD extra about the making of the film enlightens us to the fact that the working title for this film was "Bed Bugs." Thought up after one of the writers and his girlfriend had stayed in a hostel in Prague that had beg bugs under the sheets. I found it hard to wrap my head around the fact that anyone had actually stayed in a hostel in Prague after Eli Roth's movie of the same name, but anyway...

While I won't say it was the best film I've seen in awhile, I will say I enjoyed it and didn't feel I wasted any time at all. May even pick it up at Wal Mart once it hits the bargain bin.
And I really don't like Val Kilmer.

I can't remember where I read a review for this film, but the review was recent and pretty positive for too. I actually did pick it up, but haven't watched as of this time...I will check it out eventually. I love Kilmer, but his carer has all but dissipated. He also looks pretty fat in the photo you provided!

I really liked this film.