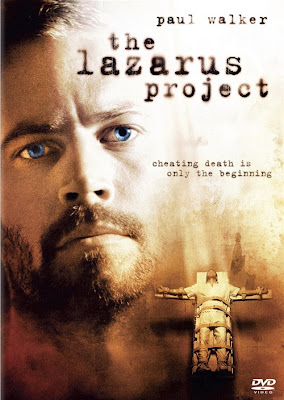 First off, let me say any chance I get to watch Paul Walker onscreen, I'm taking it.
So naturally I've seen some crappy stuff. But along with that, I've enjoyed flicks like The Fast and the Furious, Eight Below, and most especially Joy Ride.
I usually check out most of his movies, so here goes, with The Lazarus Project.

Ben (Paul Walker) is a former criminal, finishing up his parole and getting his life back on track. He's got a wife (Piper Perabo) and daughter, a nice house, and a steady job. He's happy, and that's always too much to ask for, isn't it?

Soon he loses his job after the higher-ups realize he is an ex-con. Faced with the prospect of losing everything he has worked so hard for, he turns to his brother Ricky. Recently back in town, his brother is also a criminal - but he is facing extermination due to debts owed to a mob-like organization. Ben agrees to help him in a burglary that will net them a small fortune.

Naturally, things go ape-shit and he is busted, and finds himself on trial for the murders of a security guard and another man. Though he didn't actually pull the trigger, his involvement is taken seriously in the state of Texas, and (almost unbelievably) he is sentenced to death by lethal injection.

So as he lies on the table, the needles slowly injecting death into his arm, he loses consciousness.
Bizarrely enough, Ben wakes up disoriented and wandering along an Oregon road. A priest (Bob Gunton) picks him up and takes him to a nearby psychiatric hospital. However, Ben is not a patient. The man explains he is the new groundskeeper, and has been given a second chance at life by God. Though thoroughly confused, Ben settles into this new life as best he can. He lives in a cabin near the woods' edge near the hospital, makes a new friend or two, takes in a stray dog that has a penchant for digging at "something" in the front yard, and forms a relationship of sorts with a female shrink (Linda Cardellini) at the facility.

Still, he is plagued by thoughts of his old life and unable to stop himself, he tries to get back to his family. He hops a bus and off he goes.

Stopped by a weird and ominous man in route home, the guy seems to be an angel or demon of some kind, warning Ben that he shouldn't screw around with things, that he was meant to be where he is at and has no chance of returning to his family or the life he once knew.

Basically Ben is told he will die (for real this time) if he leaves the property boundaries.

He starts poking around the hospital, wondering why some rooms are closed off and locked. And why some patients (in an off-limits section of the hospital) are behind bars like common criminals. Others seem to have the same kind of poor recollection of past events as Ben, one guy is even so distraught he kills himself.
Ben is also able to hack into the computers and do some investigating, which is rather odd - I mean, he is a convict. Would he seriously be given liberties to gain access to a computer, and be allowed to wander around the (ungated) property unattended? I mean, he was a death row prisoner. Hello? It's ok for him to be out and about now?

Feeling like he is in some kind of crazy pergatory, Ben begins to piece together the mysteries of the hospital, and in doing so begins to discover that things are not always as they seem.

While quite slow-paced, I have to admit I liked this feature. It's really not fair to complain about the pacing....this is not an action movie. More along the lines of Session 9, I'd say. I've always been fond of unusual mysteries, pot-boilers that take some time to figure out.
And I know alot of people make fun of Walker's acting chops, but he was utterly believeable in this role, and on top of that, I just like to look at him (!)
More a psychological thriller than a horror film, I found it entertaining with only one real flaw that I could see, and I can't explain or I'll give the ending away, and I hate when people do that. But I will say it involves the ending. Not flawed enough to say WTF, but just a bit poorly contrived. Definately a 'Hollywood' ending.
All in all, worth a look.