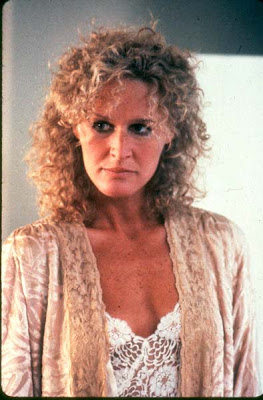 I cannot express how much I enjoyed this movie the first time I saw it. Actually, any time I've seen it I've liked the shit out of it.
Fatal Attraction was a huge, smashing success way back in 1987. And Glenn Close's performance as Alex Forrest was absolutely Oscar-worthy, and it amazes me that she didn't win. (Just who did win that year?)
Oh sure, it's a popcorn kind of movie, but damn if it wasn't scary - especially to men, I'm going to assume.

When Dan Gallagher (Michael Douglas) decides to have a spur of the moment affair, things quickly take a turn off onto the insanity highway when his one-weekend-stand becomes an invitation for true horror.
Alex just doesn't want to let him go. In fact, after Dan explains he has to head on home (to his wife!), she even attempts suicide to get his attention. This clearly unstable individual completes a laundry list of "whoa! you're crazy, bitch!" dirty deeds such as phone stalking, pretending to be interested in buying his house to meet his wife, trashing his car, recording creepy messages on tapes for him to listen to, telling him she is pregnant, killing his daughter's pet rabbit, and finally even going as far as kidnapping his daughter.

Dan even makes an ill-advised trip back to Alex's apartment to take care of things himself, and she nearly kills him with a big Michael Myers-esque knife. 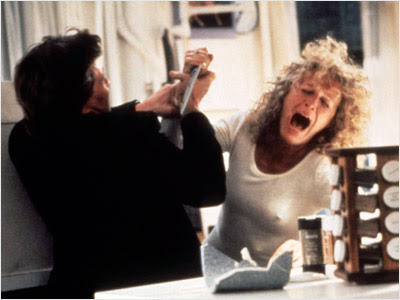 Despite multiple warnings from Dan, a restraining order, and a 'discussion' with Dan's wife Beth who finally learns of the dangerous affair, she still does not stop. Her eventual complete breakdown ends with her attacking Beth in the bathroom of the Gallagher home. Dan rushes in and all hell breaks loose.
The end-result gratification of Beth shooting Alex is boundless.

She is truly one of the all-time best nutjobs. 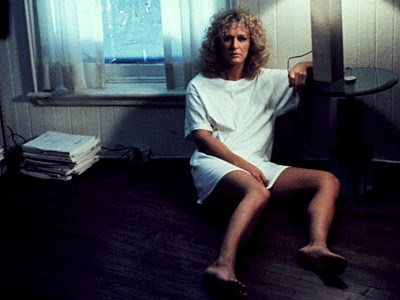 Glenn Close's portrayal is almost too much of something good - it leaves you scared shitless of people you know that are just as attractive and might have a secret psychosis you don't about. This film left an indelible impression on everyone I know when they first saw it.

Cher won the Oscar that year for "Moonstruck".