While I felt I couldn't leave Esther off a list of female villains in horror, I did just write my opinion/review on the film a few months ago. You can check out the post on Orphan in its entirety here if you need a reason why the lovely little girl needs thrown into a collection of such vile and heartless other nasties. 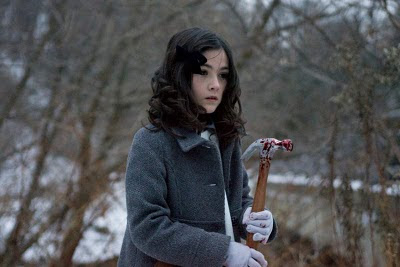 Besides, (*spoiler alert*) are we really and truly talking about a child here?
Suffice it to say, she deserves her spot.
A smattering of her malicious activities include:

*Killing a bird in her backyard in front of her siblings.

*Pushing a classmate off a sliding board, breaking the girl's ankle.

*Throwing a major fit when someone tries to remove her ribbon necklace.

*Playing her parents against one another.

*Lying on a psychologically disturbing level.

*Scaring her 'brother' and 'sister' into complete submission.

*Killing the nun from the orphanage with a hammer then hiding the body.

*Burning down her brother's tree house with him in it.

*Though brother lives, she then tries to finish him off by smothering him with a pillow while he is in the hospital.

*She tries to seduce her adoptive father. (ick)

Of course the major twist at the end all but guarantees her placement among the worst offenders, and had me exclaiming WTF?

So here's to Esther, and here's to Orphan - one of the better films of the last year, producing a villain we'll be talking about for years to come.

My heart belongs to Esther. Orphan is a fun movie, and she's so creepy and evil and crazy.

She had to play "a woman trapped in childs body". Usually kids play kids in movies. I mean this was top notch acting.

sorry, I wasn't a big fan of this movie.. There were creepy moments, (like the seduction scene), but all in all I really couldn't care if she killed everyone and the end was way predictable. I was pretty disappointed after all the hype. Maybe its just me though....

I have a big love for this gal.Though I can't always say that in the open cuz, let's face it, it's damn wrong at some level...