Okay, so I'm a big fan of black and white films (for proof, see here.)
So imagine my delight, when asked by a director to take a peek at his horror short, to find out it was filmed in black and white. Score! 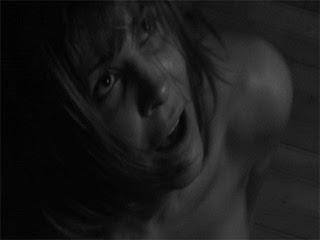 There is always a different vibe when a movie is black and white. In horror, I feel it adds a certain sense of dread and a stark sense of reality that is tough to come by in a feature with color. One need only to witness Psycho to prove this conclusion is warranted.

Contact (2009), a short film by Jeremiah Kipp, is an impressive ten minute adventure into the frightening wonderland that is middle-American drug use. Except what you get here is not a CSI episode warning us suburbanites not to huff inhalants...it's an experiment in unexpected terror.

There is little to no actual dialogue in the film, but you'll find it completely unnecessary as you follow along warily, knowing something awful is no doubt just around the corner.

We are at first introduced to a middle-class older couple setting the table for dinner. It's obvious something is weighing heavily on their minds, and when they set an extra dinner plate, you know they are certainly anxious about their intended visitor. The exchanged glances of uneasiness only serve to make the viewer equally as nervous.

We then flash to a lovey-dovey couple strolling down a city sidewalk, and soon we are privy to a covert drug deal between them and a shady looking fellow under a highway underpass (just where one one head to for their score...and where you and I wouldn't dare venture on a bet). 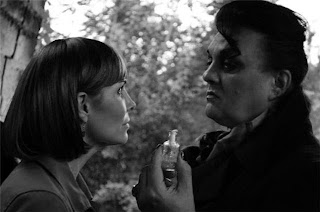 The couple then takes their ration back to their apartment where they ready their stash and sit cross-legged in front of each other to get naked and messed up, not necessarily in that order. 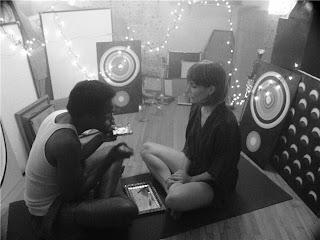 Only thing is, like with most drugs, the expected outcome differs from what I can only assume they envisioned. To say they had a freaky trip would be understating it. The man in the couple seems only to be feeling good, amorous even - but his partner - she's tripping. Bad. 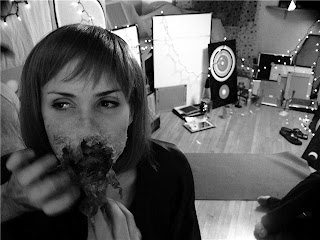 The awesome psychedelic-type effect the drug has on the woman is nothing short of horrifying, and in saying that I'm thinking this film could quite possibly be shown to high school students on the dangers of illegal drug use. Though I imagine the nudity would be a deterent, but the fact that the couple are in the foreplay stage of having a drug-induced romp only makes it seem more real. After all, who hasn't gotten high (even simply intoxicated) before sex - just to see if it enhances the mood?

We do eventually get back to the older couple waiting at their dinner table for their guest's arrival. And yes, the plot comes together nicely. But it's not tied up with a fancy little bow.
Life is harsh.

Director Kipp knows just what effect he's having on his audience, and doesn't need a Pink Floyd soundtrack or a rainbow of color to induce the anxiety and later, shock he is aiming for with this ten minute head trip.
Cinematography is especially important in a short, and this film showed great skill in that area, giving the audience a chilling perception of a seemingly normal afternoon that morphs into something out of a nightmare.
As far as acting, the two leads were terrific. In particular, indie actress Zoe Daelman Chlanda does a real bang-up job of portraying the victim of the bad trip. Looking forward to more from her.
And I must mention the ominous background music - which made up for the lack of dialogue quite nicely, casting a forboding sense of trepidation as the film continues its journey.

Now I'm certainly no authority on short films - even horror ones - but I figure if they can convey so many emotions within ten minutes, they are doing something right. I didn't want it to end, so I have to assume that's a good thing.

I'm a little more than anxious to see what this director has up his sleeve next.
'Contact' is online as part of the IndieRoar Online Film Competition, so be sure to click the link and check out this little gem.

Great review! I am definitely with you when it comes to black and white movies, the aura of them just seem to draw you in. I remember watching the special edition B&W version of the Mist (which is the original version the studio colorized it) and was blown away. That movie was totally different and so much better in that format and should serve as a perfect example to why some things are better left in black and white!