What we have here is a walking, talking reason for my husband to actually sit through a horror movie, tongue wagging, wishing for more. 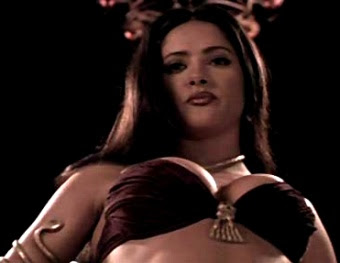 In 'From Dusk till Dawn', the beautiful Salma Hayek plays exotic dancer Santanico Pandemonium, who at first, seems content just to stick her foot in Quentin Tarentino's mouth and have a snake wrap around her crotch. Okey doke.
But as things get a little hotter and tempers flare in the club, she shows her true side by morphing into a nasty version of the undead. She's hungry, and George Clooney is on the menu. Can't say I blame her there.

In a movie that spent the first forty-five minutes seemingly as a crime-spree/hostage flick, to see the staff of strippers, bartenders, and even the band suddenly become vampires has to go down in my book as a real head-jerker. And apparently Salma was one of the head vamps. 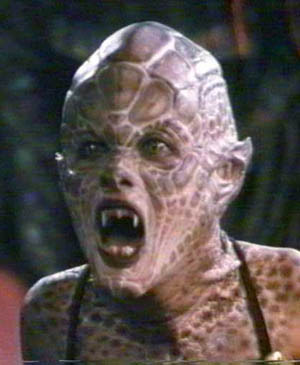 Unfortunately she isn't a good-looking-while-sporting-fangs-True-Blood kind of vampire, she's more of a Bram Stoker's Dracula-devilish-bat type of bloodsucker. And alas, she meets her end in a gruesome death that only the Evil Dead movies can rival as far as spurting gore goes.
But hey, her dance was something special, 'eh guys? 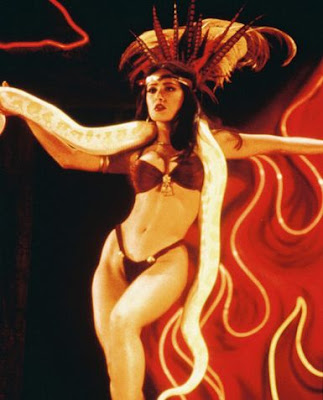 Labels: From Dusk till Dawn, Women in Horror Month: Villains

I thought this movie was terribly uneven...but you're right. Her dance really was something special. *growl*

I always thought that Quentin Tarantino saw Vamp and said "I can do that better!" and then wrote the screenplay for From Dusk Till Dawn.

Santanico Pandemonium is the highlight of that film, and that dance she does for Tarantino...beyond awesome!

I try so hard to like this film, but I honestly find the first 45m infinitely more interesting and powerful than the Horror aspects. Me and wife are actually sitting down tomorrow to watch the first two, perfect timing!