One of our newest villains, and certainly running a contest with Samara (The Ring) for the youngest, is Eli from the stunning Swedish vampire film, Låt den rätte komma in (Let the Right One In). 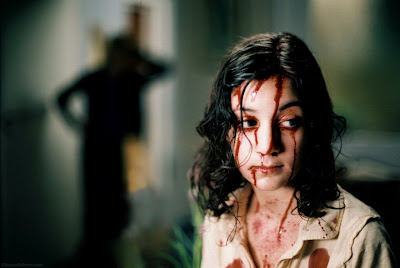 The following comments are strictly based on the film, because the book itself actually makes Eli more of an androgynous child, a boy, even. In the film, I couldn't help but to perceive her as female, and I think most would agree even though Eli explains to Oskar that she is "not a girl".


It is actually quite difficult to call Eli a villain, because you find yourself rooting for her throughout most of the film.

When Eli first meets Oskar, a local boy being bullied by his classmates, she tells him outright that they cannot be friends. For the viewing audience, it's nearly impossible not to already know she is a vampire. Between her pale complexion, her indifference to the cold, and the fact that the movie was so raved about prior to release here in the states, most people know the story before ever actually seeing it. Those things, combined with the remarkable book it is based on, give you a heads up. 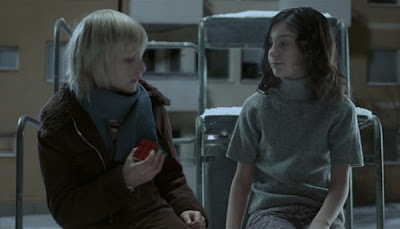 Oskar takes a little longer to see the light. At first he is just happy to have a friend, and is encouraged by Eli to stand up to the bullies. When he does so, he feels empowered and even closer to Eli - and he wants to go steady. But in the scene where they make a "blood bond" after agreeing to be a 'couple', it proves to Oskar that perhaps Eli is a tad bit different. Of course seeing her uncontrollably licking his blood off the floor might be a great indicator as well. 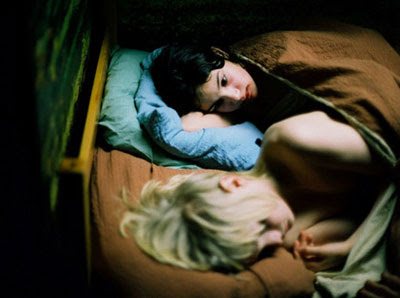 When Eli loses her main source of food (her much older friend Hakan has been killing off town residents for their blood supply and eventually loses his own life), she resorts to attacking a local woman and turning her into a vampire. Eli also dispatches Oskar's bullies with a loving vengeance. Obviously, bad things tend to happen when Eli is around. 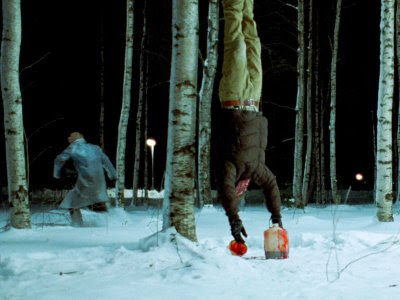 It cannot be said that Eli is a murderous bloodsucker with no remorse. She immediately tries to warn Oskar that she cannot be friends with him. And it's never really thoroughly explained (in the movie) how someone so young had the misfortune of becoming a vampire, and so you really feel quite bad for her as she does what she needs to to survive.


Lina Leandersson as Eli was truly a marvel. How they get children to act with such intensity and grace is beyond me. 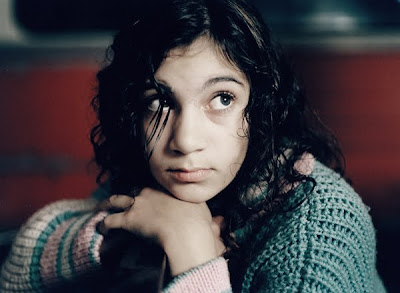 You don't want to be frightened of her, and yet in the scene where Oskar attempts to have her test the old vampire myth and enter a home uninvited - and we see what happens - it is a simple moment of terror. My favorite scene in the film.

But in the end, she is a vampire. And she does kill people for a living, so to speak. So in essence, she is a villain...

But a villain you can perhaps side with, in this case.

She's an anti hero of sorts, cause she is Oskars hero. The last scene in the pool is awesome! Love this movie, I wonder how the remake is going to destroy the awesomeness of this one.

Agree on the pool scene- although I think I agree with you Chris on the best scene being the terrifying moment of when Oskar does not invite Eli in! It's too powerful for words. Eli rocks for shizzle

But didn't you love The Kiss? That blood-drenched but oh-so-sweet kiss? Has there ever been a better horror kiss?

Eli's great, the scene in which she is discovered resting in the bathtub is GREAT.

Great villain, but isn't he/she/it supposed to be genderless?

Quick note to Anonymous: In one of the first paragraphs of the post I mention that the comments are taken in the context of the movie, and that Eli (particularly in the book) is supposed to be androgynous, a boy even. But for all intents and purposes, she appeared to be female in the film. And I know I'm not alone in that sentiment.

Interesting review of a great character and movie.

I thought the ambiguity of Eli's character was its most powerful aspect. For instance, although she's powerful, she's cool with exploiting her childlike appearance when she has needs to for food, and the ending itself is incredibly ambiguous - Oskar is saved and finds a companion but is he going to end up in the same, expendable position as Eli's first 'helper'?

This is a great film, and it's indicative that it's already being remade (it's, what, 2 years old?)