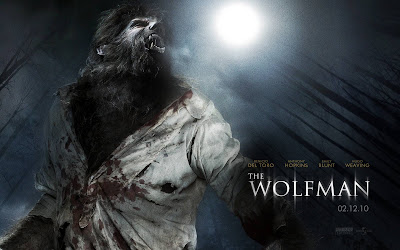 As it seems everyone else is posting reviews about this one, I thought I'd just go the pro-con route by listing what I liked and disliked.
*Spoilers* follow, heed my warning.

PRO:
The atmosphere was really fantastic. Every bit as dark and ominous as a movie about werewolves should be. There was so much fog in this film it felt like a John Carpenter prop. While it might sound like I am complaining, I'm not. I'm all for the bleak period film that just screams gothic. I loved the look of Sleepy Hollow, Bram Stoker's Dracula, etc. Any film that has a sinister, near-hopeless feel to it is right up my alley. 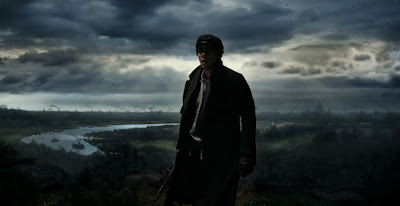 CON:
Sometimes - and maybe this was just at my theater, I don't know - the film itself was literally too dark. Not in mood but in actual lighting. There are a few scenes, about mid-way through, where Lawrence is hiding out from his pursuers in a shoppe (?) with Gwen - and I couldn't see a blessed thing. Hardly even the outlines of their faces. I could hear the whispering dialogue but as far as seeing reactions upon their faces, ah.... no. Nothing. Too damn dark. Should translate better for me on the small screen at home when I can change my tv settings to "vivid"...
PRO:
The look of the (tremendously huge) Talbot estate had a real Jane Austen-esque feel to it - if Elizabeth Bennet was housing a lycanthrope, of course. The house was practically falling down around them on the outside, and embarrassingly shoddy housekeeping made the inside look like a prehistoric cave or something. Leaves crunching underfoot is not cool when you are inside a house. In other words, it looked great.
CON:
CGI. I know there is a place for it. I realize how important it is to the film industry. But it can be soooo overused (i.e. Van Helsing - a travesty I'll never recover from). In The Wolfman, you knew it was coming. Though I was hoping with the talents of the great Rick Baker that we might be able to squeeze by without any seriously obvious CGI fx. Hmm.. Not so much.
Okay, what was up with the CGI bear? I've heard other reviewers mention this and I too, cannot let it pass without a little dig. Could they really have not hired a bear for like, one day? It didn't have much screen time for heaven's sake. 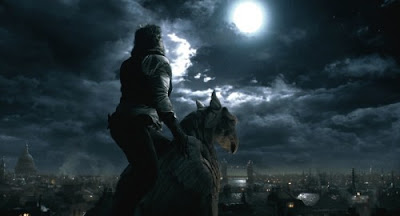 Add to that the Wolfman and all his leaping and jumping over buildings in a single bound. WTF?
You knew there'd be CGI in the transformation - that was a given. Bring hair in, take hair away...I get it. But I am a practical effects girl. No matter what, it's just more realistic. Sorry.
PRO:
Casting. I don't know about everyone else, but I loved Benecio del Toro in the role of Lawrence Talbot. 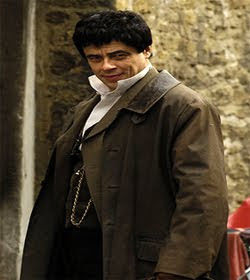 I felt he lent an authenticity to the role that might not have come across as well with a lesser actor. Besides being quite a good looking fellow sans wolf-garb, he really made you feel bad for him - he was so stricken after finding out just what he had become. He knew there was no cure, no out for him - and yet he still strived to stop his menacing patriarch.
Emily Blunt was well-cast in the role of Gwen - though believing that she had fallen so hard for her (very) recently deceased fiance's brother so fast was asking me to go a bit too far. I almost felt like I was reading a cheap romance novel.

I very much liked Hugo Weaving as Aberline. First of all, I've liked him since LOTR (and yes, I realize he was in The Matrix, but I'm not a genuine fan) and second, the whole Aberline role was well done, with a slight mention of his connection to the Ripper case. Loved it.

Anthony Hopkins, as the older Talbot, seemed almost a carbon copy of the Van Helsing character he portrayed in Bram Stoker's Dracula. He squints his eyes and smiles maliciously while spouting off warnings of gloom and doom regarding a creature of the night. Yep, Van Helsing all over again. Still, Hopkins always gives his all and this is no exception.

CON:
The fight at the end of the film. I mean, wow. Though the special effects were snazzy enough for Hopkins and del Toro to keep their general specific-to-them 'manly' looks while being taken over by the beast, I still found it rather ridiculous when the elder Talbot starting throwing chairs and ripping off his clothing in a wild fit of rage. Weird. Just weird.
However, the sight of the hulking Talbot mansion filled with flames was hauntingly beautiful.
All of that being said, I still enjoyed the film, and felt it was a worthy addition in the world of re-makes. At least they waited nearly seventy years to do it, instead of merely ten or twenty as seems to be the norm. Sometimes I think we horror fans are too hard on new releases. We rush to the theater on opening weekend and then pick the films apart piece by piece. In the end, the horror genre isn't out to win any Oscars most of the time...it's there to entertain us.
Are we not entertained?? 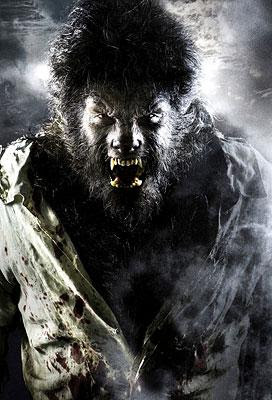 Moreover, I appreciated that they kept the look of the wolfman himself as close to the original '41 version as they did. He didn't morph into a Dog Soldiers-type werewolf - or god forbid one of those New Moon doggies. He turned into a wolf-man. Literally.
There were some frightening elements to the film of course, but nothing that actually scared me.
Probably my favorite part was near the beginning - right before Lawrence is bitten - in the gypsy campsite. People getting violently attacked, snatched away by the roaming fangster. Everyone running away screaming while Lawrence tries to pinpoint just where the beast is. Until all is quiet on the foggy terrain. And you hear that howl.
Well done, that.

On a side note, just as the movie was to begin, a man came into the theater toting his young (like, 8 or 9 year old) daughter and they sat right next to me. I was taken aback, wondering what sense the man had bringing someone so young to a movie of this kind. It is rated R after all. And it's a hard R. There are endless moments of bloody gut-ripping violence....disembowelments, decapitations, limb removals. The poor girl shuddered at every turn and every last jump-scare plotted throughout the film certainly got her. Out of the corner of my eye I saw her hide her eyes in her father's chest multiple times and I wondered how long it would take for her nightmares to go away.

Later, a friend (you know who you are) mentioned to me that perhaps it would have a positive effect on her after all - maybe she'd become a life-long horror fan (like myself) from this experience, and she'd look back with fond memories of the movie her dad took her to that started her off on her crazy obsession.
I'd like to think that will be the case.

thank you for a solid review!

At the theater we saw this at there were 2 girls under the age of 3 and about 15 kids right around10 years old. WTF?

I just cant get in to the CG, I wont be checking this one out until DVD even though I have been hearing positive things. I hope the pros outweigh the cons when I do get around to it, but thanks for the review for now!

Nice review Chris. I too loved the gothic atmosphere, but everything else just seemed so half-arsed. I also liked Blunt and Del Toro and Elfman's score, but it was all so beige. To quote Talbot Senior - 'You've directed some terrible things, Joe Johnston. Terrible things.' Well, 'terrible' might be too strong. 'Mediocre' would be more fitting.

So no five out of five brilliance lemons for this one eh?

I was so disappointed with this film - nice idea and all and yes I agree the film did look amazing (if a little overdone) but I felt nothing for any of the characters, Hopkins totally overplaying his role (again) and Benicio... god I love you but you so don't work as a Victorian gent! The ending was completely naff and all of it really quite predictable.... I'd wait till its premier on the good old box if you REALLY want to see it!

I loved this movie - great review.
Interesting fact: I notice that you picked up on this -
"The look of the (tremendously huge) Talbot estate had a real Jane Austen-esque feel to it - if Elizabeth Bennet was housing a lycanthrope, of course"
The house that was used for most of the external scenes was Chatsworth House in Derbyshire, England (½ an hour's drive from where I live) and it was also used as Pemblerley in....Pride & Prejudice. Well spotted, ha!