So here we are.
The official start to Women in Horror Recognition Month.
As promised, I begin my month-long spotlight of female horror villains to you starting with one of my all-time favorites:
Annie Wilkes.

[**Please keep in mind every entry this month in this series has possible (and probable) spoilers.
I am not responsible for raining on your parade**] 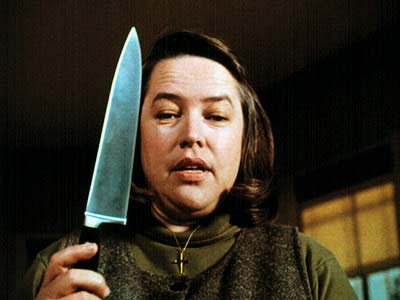 Yikes. Hearing that sentence makes most people cringe these days, due to the powerhouse performance by Kathy Bates as the hot-tempered, way-off-kilter psychopath Annie Wilkes in the movie Misery.
The outstanding book by Stephen King (one of his best) makes Annie even more of a terror, in my opinion. For instance, she doesn't shoot the town sherriff in the basement, she runs him over outside with a riding lawn mower. And she doesn't just sledgehammer Paul Sheldon's feet, she cuts one off with an ax. But alas, for the movie to turn out slightly less gruesome than say, Saw, changes were made. (I for one, would have loved to have seen the lawnmower demise....call me sick, I can take it.)
So why is Annie so obsessed with making Paul her prisoner? Well, she really doesn't see it that way - and that is the most disturbing part. Coincidence and bad luck put Paul on that snowy highway at just that time. His wreck and eventual rescue was just a really (exceptionally) bad day, actually.
If he'd have just waited until after the snowstorm to leave the hotel....
Yeah, well... he didn't. 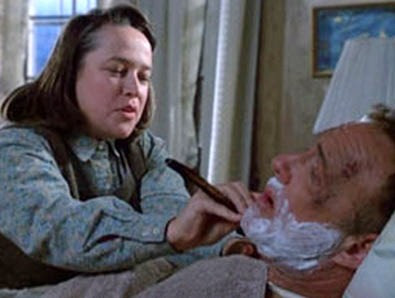 And what a lucky break for our favorite psychotic nurse! Finding her favorite author along the side of the road - and having the medical skills (?) to save him - and the inhuman strength to heave him over her shoulder and lug him up a hillside through two feet of snow!
So she takes him home and locks him away in a lovely room with a view and at first, all is peachy. But then Paul allows her to read an ARC of a book he is finishing, she is appalled at his use of derogatory language and content. Here, after a fit of rage and some spilled soup, is where Paul realizes all hope is possibly lost.
Things continue on a downward spiral when Annie picks up a copy of Paul's latest Misery book and finds out he killed off her favorite character. That is where things get rather slippery. 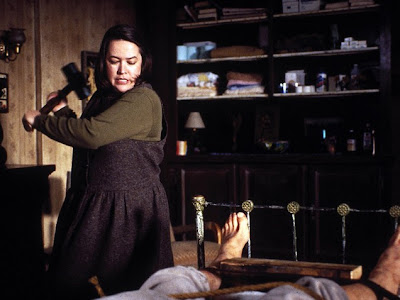 Annie is a classic sociopathic personality. Apparently she had been arrested and tried for some suspicious deaths at the hospital she worked at. (In the book she was responsible for several other murders, including her own father) She can't see anything outside the restraints of her own mental illness. And to watch her slip further into madness is anything but boring.

Kathy Bates absolutely deserved the Oscar she won for her performance in the 1990 movie.
She owned that role, scared the shit out of me, and will forever go down as one of the greatest female villains of all time. 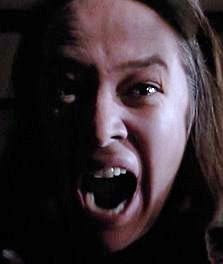 What a great look at one of my favorite characters of all time, one who I love both in novel form and movie form -- though novel a little better, because, you are right, she is even meaner and more gruesome. I mean just look at the scene with the electric meat carver and Paul's thumb. Ugh, it makes me shiver just thinking about it.

Kathy Bates was perfect in the roll too. I once read that her roommate actually read the book when it first came out and told her she needed to play the part when they made it into a movie.

This is why I'll never write a novel. You just never know...

Great write up. You even sparked my interest in reading the book. The only King novel I've tackled is It which I love, love, love.

Found your blog through Hannah.

I agree with you - Kathy Bates is utterly brilliant and this entire film was carried by two central characters because the writing is also brilliant.

Love your blog!! You have inspired me:)
Come visit me at Horror-movies.ca I am thedeadshallrule
stop over for a peek at my blog
http://earthdancedaph.blogspot.com
We have much in common...MUHAHAHAHA