Female Villains in Horror: The Woman in Black

The Woman in Black is seriously one of the most frightening ghost stories I have ever seen. 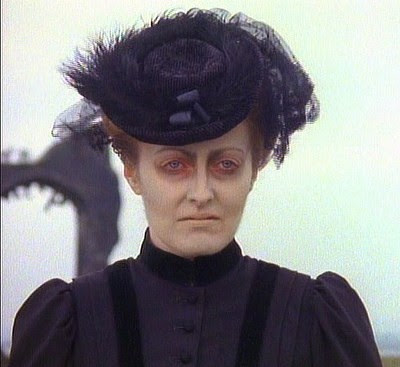 From the classic ghost story of the same name by Susan Hill, it made an indelible impression on me many years ago the first time I saw it. The book was equally unnerving, and I vividly remember lying in my bed late one night, unable to put it down.

For many years I was content to watch my VHS copy of the film, but then I started getting anxious. What if it broke? So I about killed myself trying to find a copy of it on DVD. It's just not available, people.
But I do own it. I'll just say one word. Bootleg.
My bad.

It is so hard to just pick out certain scary parts because the whole thing is one big study in quiet terror. A chilling sense of dread encompasses nearly every moment of this 1989 UK made-for-tv (surprised?) movie.

This post is a flat-out review, as it's hard for me to just pick a few things.

Arthur Kidd is a young lawyer trying to advance his position within his firm when he is called upon by a superior to close an estate after the death of an elderly recluse who lives far out in a marsh on the outskirts of a tiny town in coastal Britain. Not thrilled with his duty but unable to refuse, he heads out.

He first meets up with Mr. Toovey, the well-to-do owner of a local inn, while on the train into town. The kind man offers to set him up with a room at the inn and then is quite unsettled to learn what Mr. Kidd is there to do. Apparently the decedent had a reputation for being rather eccentric.

When Kidd attends the woman's funeral with the town's local solicitor, they are the only two people there. But he then sees a woman, dressed all in black, in the back of the church. After the service he attempts to locate her to ask if she was related to the deceased, but doesn't see her....until he is in the graveyard while Mrs. Drablow's coffin is being put in the ground. 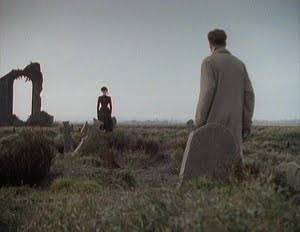 The vision of her standing in the cemetery is burned on my brain.

When Kidd mentions seeing the woman to the solicitor, the man becomes instantly uneasy and loses all color in his face, immediately changing the subject.

Eventually, Mr. Kidd makes his way out to the Eel Marsh House, convincing a local man to take him there and drop him off, with the intention of returning before the tides change. The home is situated at the end of a causeway through the marsh, and when it is high tide, the water covers any possible route in and out.

After a quick check of the house, Kidd is walking the grounds when he discovers a small cemetery. He is shocked to see the woman in black there again, and this time sees her much closer. The woman is ghostly white (go figure) and has such a look of hatred on her face that he practically runs back to the house. 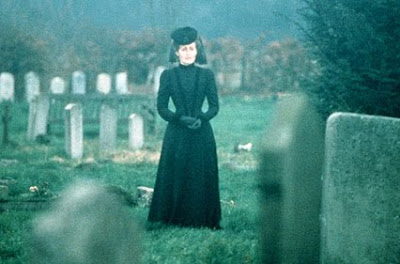 Rummaging through Mrs. Drablows personal effects and papers, he comes across a death certificate of two people who died on the same day, one of them a child. He listens to some disturbing recordings made by Mrs. Drablow and becomes too ill at ease to wait for the driver. He walks back out the causeway alone to intercept the driver, but instead hears what can only be described as a horrific accident involving a horse and carriage. But the mist is so thick he cannot see. Anxious to help whomever has been hurt, he hurries along only to become lost. He makes it back to the house, and when his driver takes him back into town, he voices his concerns to Mr. Toovey, who in turn recommends he not go back to the house.

Realizing he needs to finish his job at the marsh house or risk his career, he reluctantly decides to return. Mr. Toovey lends Kidd his dog, Spider, to keep him company.

Back at the house and deep into papers involving the estate, Kidd hears noises upstairs and upon investigation, finds the noise coming from behind a locked door. He panics and goes off to get an ax (in a moment of sheer craziness) but when he comes back the door is open. It's a nursery. He hears a child's voice calling out in a greeting, but then the generator begins to fail and he runs to fix it because being in the dark there would be unbearable.

Once the lights are on, he continues his search of Mrs. Drablow's papers, only to discover she had taken a child away from her sister Jennet who was unable to raise it. The child was never to know about his mother's true identity, but one day Jennet steals the child away and attempts to leave by horse and carriage.

As you can surmise by now, they got lost on the causeway and fell into the marsh to their deaths. Hence the "accident" noises Kidd heard. Jennet is now a ghost haunting the Eel Marsh House and the entire town of Crythin Gifford. It is said that when someone sees the woman in black that it forewarns the death of a child.

When Spider runs away in the darkness and back to Mr. Toovey, he becomes worried and goes to check on Mr. Kidd at the Eel Marsh House. He finds him in a state of panic, rambling on about the child calling out to him and about the nursery. But when he shows Mr. Toovey the room, it is a shambles, with everything broken and trashed. This is apparently too much for Kidd, who collapses.

He is taken back to Mr. Toovey's house and nursed back to health. However, is is plagued by terrifying dreams of the woman in black. There is a scene in which he envisions the ghost hovering over him, cackling at him maliciously, that is so distressingly scary that I can see it in my head just thinking about it. 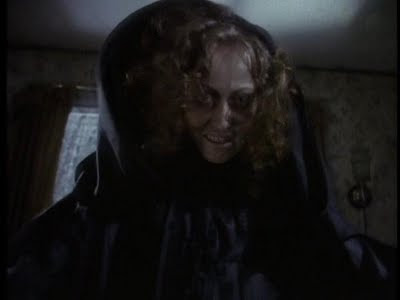 Needless to say, Kidd finally does regain his composure and his health, but he hadn't heard the last from the haunting specter. 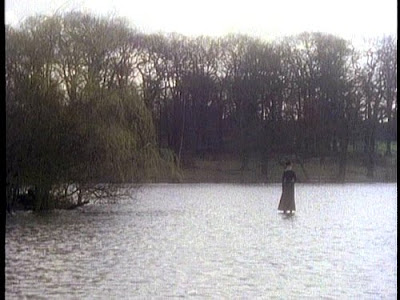 I wish everyone could see this film at least once, so you would know what a good old-fashioned ghost story actually looks like. But alas, the original 1989 version is out of print, unless you are savvy and know where to look.

Encouraging news though - apparently it is being remade by Hammer Films for a 2010 release, supposedly in 3D (which I think lends a hokey-ness to just about anything, sadly...) so I guess the tale will be told to new generations, so I'm somewhat anxious to see that. But I seriously doubt they can achieve the nostalgic feel of the simple original.

I realize I've digressed a bit from explaining the straightforward reasons The Woman in Black is a great villain, but let me be clear - this woman is a spine-tingling antagonist from the word go.

Okay, you can't buy the film - so try the book. Buy it here.

Labels: The Woman in Black, Women in Horror Month: Villains

Thanks, your post explains why I haven't been able to find this movie anywhere. I've been looking for it off & on over the years & most recently was looking for it about a year ago & gave up a few months back. I loved the feel of the movie, the shots, the composition, the simplicity, the era, everything. They really got this one right.

It's too bad Hammer feels the need to add 3D to the remaking of it, the 1989 version certainly didn't need anything added. It'll be interesting to see how Hammer interprets it, I'm hoping they don't do a poorly executed CGI villain or a villain with badly done CGI added bits, I find it so damn vexing & it can be distracting when watching a movie.

I've been a serious horror junkie for ages who's just recently found your site & I've got to say I'm loving this blog, it's like a little slice of heaven for me. You're doing an amazing job, kudos!

So the whole movie is on you tube? Wow, cool. That's all kinds of awesome for people who haven't seen it. I checked eBay, they don't even have the DVD anymore as a "bootleg'.

Thanks so much for the kind words about my blog - they do mean a lot...
Be sure to check out the other sites on my blog roll - there really is a plethora of great blogs out there:)

It looks like all of the movie is there on youtube, it has 11 parts & I haven't been able to sit down and look at all 11 yet. I've checked the beginning & the end, I find on youtube the end is often missing so I always check it to make sure it's there & in tact. I'll probably be having a look at the whole thing over the next few days, so if you don't see it before I do I'll let you know if it is all there.

part 1 of 11 can be found here (sorry I haven't learnt how to make a nice click on link in blog posts.) The other parts are in the side bar.
http://www.youtube.com/watch?v=w6jAM-aQLbc

I found the following site as well, it looks like you can download it here. I'm not completely certain as I didn't get a chance to check out the place much or attempt to download it.
http://www.filestube.com/t/the+woman+in+black+download

I didn't find it on ebay either when I looked several months ago, which struck me as odd, because when in doubt check ebay & you'll usually find a least one person with whatever you're looking for.

I have been been exploring the other sites you have posted on your blog, it's wonderful, so much great horror & interesting reads, I'll have reading for awhile. :)

I'm glad to know I can watch this on YouTube. After reading your review, I really want to see it. It is really hard to find a decent movie based on a ghost story these days.

B.R.: Yes, that is crazy kismet, isn't it? I think I may have mentioned that very fact in my Fango review online...