Scandinavian filmmakers all seem to have the same quiet and beautiful approach to storytelling, this movie being no exception. You feel as if you are in a dark fairytale, there is a sense of mysticism about it. The plot centers around Oskar (Kåre Hedebrant), a young boy who is troubled at school by bullies and at home by apathetic parents. He finds a friend in the mysterious Eli (Lina Leandersson), who appears to be the same age but is in fact a fierce but lonely vampire. Their relationship is strange but beautiful; the movie is thoughtful, emotional but also chilling and haunting. The presence of the snow adds to the tone, it lays hushed and soft like the secret the pair hold between them. Breathtaking cinematography and acting are just two of the elements that make this an unforgettable film, and arguably one of the best vampire stories ever told. /MR 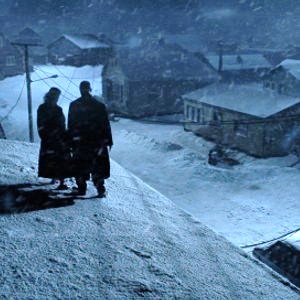 Based on the graphic novel by Steve Miles, the premise for this frostbitten tale of terror is one of the most irresistible in vampire film history. Traditionally vampires are extinguished when they encounter sunlight; but what happens when there is no sunlight for days on end? When the Alaskan town of Barrow is plunged into darkness for a month, its residents are set upon and torn asunder by a bloodthirsty tribe of vampires. Setting a vampire film in a place where sunlight vanishes for days on end is a stroke of genius. Barrow, the northernmost town in America, is 300 miles from its closest neighbour, and every year it endures 30 days of sunless night. From the opening shot – an aerial view of the town which renders it a slight blemish in a seemingly endless blast of white - immediately showcases just how isolated the place is. With many residents heading south for the duration of the polar night, those who remain seem particularly vulnerable. With dangerously low temperatures, wind chill and white out conditions from blowing snow; they are essentially trapped here until spring. If the elements aren’t enough to off the remaining residents, the small matter of the horde of vampires stealthily encroaching upon the town sure will. With no sunlight for such a period of time, Barrow proves too irresistible for the ravenous fanged ones, and they arrive in droves; all razor-teeth, glinting black eyes and incomprehensibly thirsty for blood. Far from the romanticised version of vampires audiences may be more accustomed to, this lot are animalistic predators who natter in an arcane language and hunt in packs. Taut, chilling and compelling, the film follows the increasingly desperate citizens of Barrow as they try to wait out the days of darkness and survive vampire attacks. Empty white streets run crimson before long./JG

Sometimes the simplest idea can be the most frightening.  When an entire film takes place in a single location, the thought that it could be boring does come to mind. But if done right, it can pack a real punch.  Adam Green’s Frozen puts the three main characters in what seems like a hopeless situation - wait! It IS a hopeless situation.  Dan  (Kevin Zegers), Joe (Shawn Ashmore), and Dan’s girlfriend Parker (Emma Bell) are spending a leisurely Sunday at Mt Holliston, a local ski resort.  They talk the ski attendant into discounting their lift prices and then later into letting them take one last ride up the mountain for a last-ditch effort at the slopes.  Unfortunately for them,  the attendant is called away and replaced by someone who has no idea our trio is on the lift. Because of an impending storm they close the resort early - and accidentally leave the three friends stranded in the lift, far above the ground below.  At which point the real tension starts.  I can’t express how uncomfortable this film made me.  In the same respect that Jaws made people afraid of the water and Open Water drew people away from open ocean diving, Frozen made me never want to ski - ever.  As if it isn’t bad enough that the three are stuck high in the air, you add the snowstorm, frigid temperatures, and finally - a pack of hungry wolves, and you have a film that should keep you on the edge of your seat and make your stomach churn with anxiousness.  It’s quite possible that freezing to death would be better than the alternative. / CH 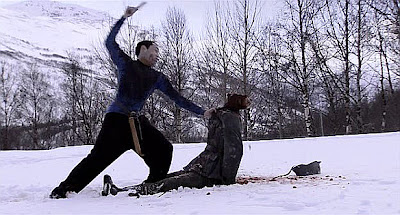 A group of medical students on a skiing holiday in Norway come face to face with marauding Nazi zombies. Yup. Nazi zombies. Dead Snow is an outrageous comedy-horror which not only features an abundance of striking imagery (there’s a LOT of blood on snow), but also takes a familiar story (teens menaced in secluded cabin by otherworldly evils) in a frantic and refreshingly entertaining direction. The Nazi zombies cut an imposing swath through the snow covered landscape, and the amount of blood they splash across pristine snow is astounding, as the special effects become splashier and gorier; no doubt sating the appetite of even the most ravenous gore hound. One utterly gripping scene involves a lone character setting up a tent in a blizzard in the middle of the night. Sensing he is not alone, he looks outside his isolated tent and we follow his torch light across the dark, snow covered ground to reveal the shocking vision of a figure in unmistakable WWII garb looming out of the snow-flecked night… What adds to Dead Snow’s effectiveness is the sweeping snow strewn location of Øksfjord in the far north of Norway; all blindingly white vistas encroached upon by the blackest forests in which all manner of evil seems to lurk./JG

A Swedish comedy-horror film, Frostbitten uses some of the same elements of 30 Days of Night by having a location in the Arctic circle, giving them thirty days or more of utter darkness due to the polar night closing in. When a Annika moves there to escape a bad marriage, she finds a job at a local hospital working under a famous geneticist. Her daughter Saga finds friends a goth friend and attends a party in which strange pills are being passed out that seem to heighten all the senses.  What we find out soon enough is that the mysterious Dr. Beckert is the last survivor of a World War II-era massacre by a group of vampires.  The cold Arctic wind and snow provide the perfect backdrop for a film that boasts not only a death scene involving a gnome, but a talking dog.  Better yet -the man seems to understand the dog perfectly. /CH
Posted by Christine Hadden at 2/05/2013

Frozen was so much better than it should have been! The story was smart and (strangely) plausible and I actually liked all the characters.
Only stupid thing was when the guy jumped off the lift with his legs straight. He should've been smarter than that.

Oh, how I love me some Dead Snow. I haven't watched it since the first time two years ago - that one needs a rewatch. And 30 Days of Night? So much awesome from a movie that I really didn't expect anything from. The vampires were badass like they should be and the frigid environment provided the perfect atmosphere and tone. Love it.