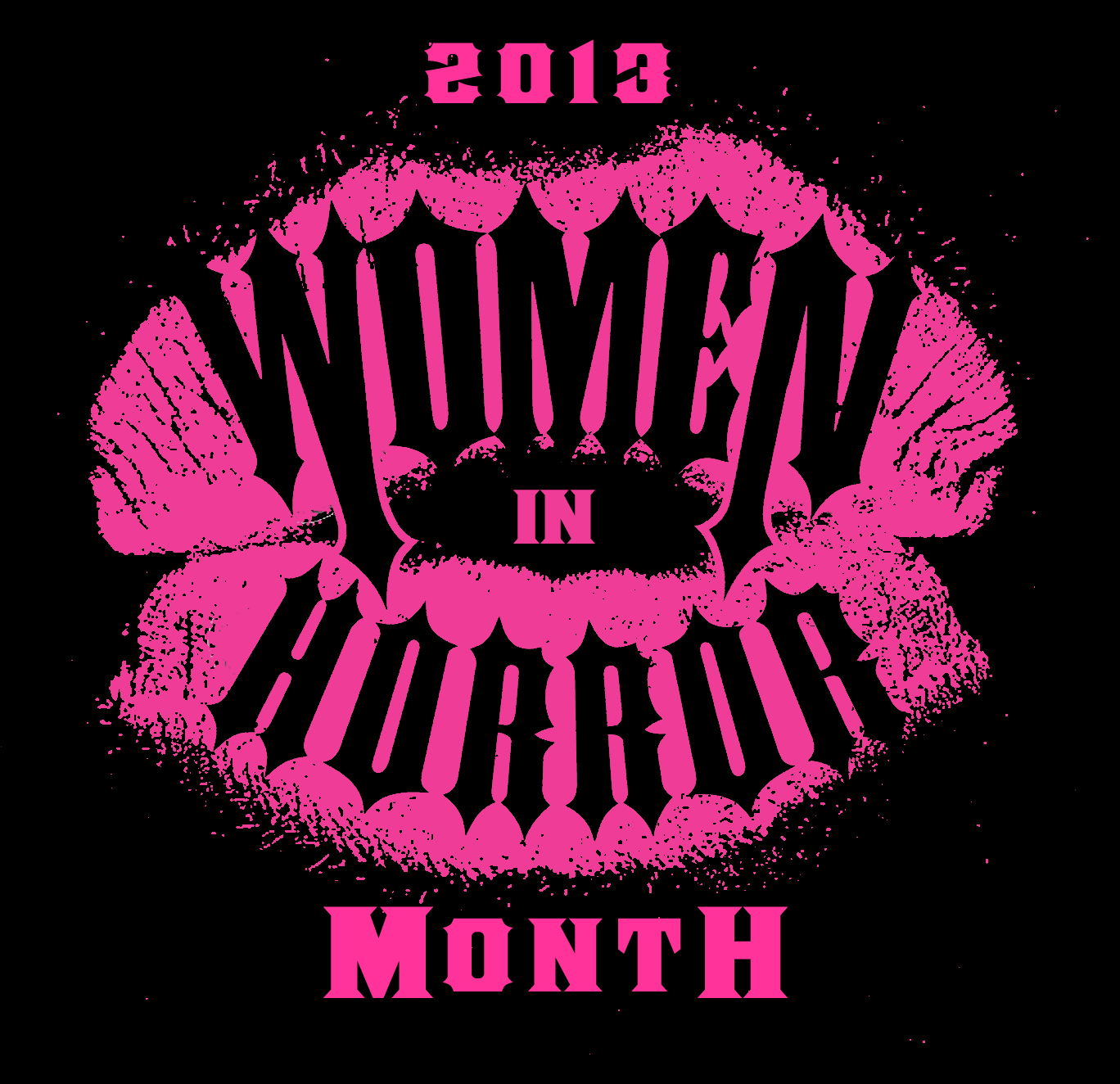 Welcome to Fascination with Fear's first post to celebrate Women in Horror Month.  If you didn't already know what WiHM is all about (and if you don't, I fear you might be living under a rock), here's a link to the site so you can read all about its mission and just what we are all trying to do here.

Marie and I are not here to get all political on your asses, but we do just want to mention that Women in Horror Month is important to us because hey - we're women.  And though we're not trying to fight to get a script green-lighted, directing our first feature, or trying to secure a make-up job for the next Sam Raimi film, we certainly celebrate those who are and we throw in our voices to say hey, we appreciate women's contributions to the genre that we love best.

It's people like Hannah Neurotica (founder of WiHM) who do their damndest to make this genre a better place for women. And yes, we would love it if women were celebrated year round for their contributions, but face it, that just isn't always so.  Women still have to fight to have their voices heard (just like in so many other things in the world), and they still make less money than men, believe it or not.  In the horror genre, women are generally underrepresented and under-appreciated, that's all we're saying.

SO we want to celebrate women.  I've done this before on the blog over the last several years, but this year I have Marie to help me.  Marie is a big advocate of WiHM and as a writer she is just finding her voice in horror, having been published at least four times in the last several months.  She has what most women of horror have: determination.

With that said, Marie and I have decided to split our posts into weeks, with this week being "Final Girl Week", in which we will celebrate our favorite determined and sometimes sassy final girls.  Many you will recognize, some you won't think of until you see them on the post, some (we're sure) you will disagree with, and some of you will complain about who you think you should have seen.  Please remember this is not a definitive list (I hate the word definitive...who are we to say?) - but we think you'll agree with most!

Each day we will highlight two final girls - one of my picks, and one of Marie's. Hence, you will get fourteen in all.  Day one starts out with my pick of Beth from Hostel 2 and Marie's pick of The Girls of Death Proof! 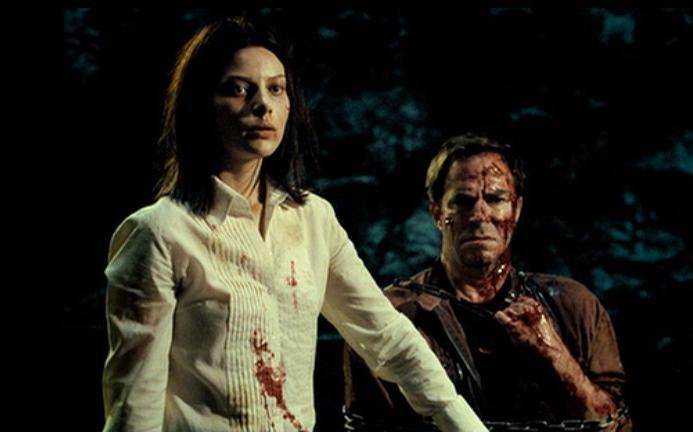 While it might seem an odd or forgotten choice at first, there's no doubt Beth deserves to be on a list like this.  Hostel 2 may actually be better than the first one, but that could be because there are women in the main roles instead of those three obnoxious guys from the first one. Instead we get two obnoxious girls and one you feel like rooting for.  And that girl is Beth (Lauren German).

Rich girl Beth seemed to be smart enough to know better, but when faced with the no-brainer invitation to go to a party at an exclusive spa, they should have realized something was fishy right from the get-go. 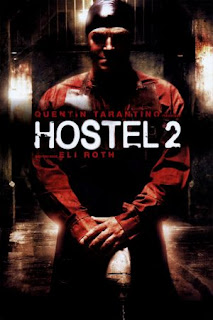 Sequels aren’t always the best for getting to know characters, and this one isn’t an exception. But what makes Beth such a standout final girl is the final acts of violence that she seeks revenge with.  After falling asleep at the spa, she wakes up to find her friends gone and all of her belongings missing. She eyes some suspicious men and flees from them, only to be picked up by “friends” and taken to a mansion where she discovers the men behind Elite Hunting.

All of this doesn’t deter her from trying to escape. Even when she is tied to a chair and tortured, she doesn’t lose her nerve.  She seduces her captor, shoves a needle in his ear, and bargains with the Elite Hunting staff to join their ranks. Being extraordinarily wealthy,  she easily buys her way into the club and kills her captor (by cutting off his penis and throwing it to the dogs, leaving him to bleed to death). After this, she assures her place in Elite Hunting by getting the requisite tattoo.

Not done there, she tricks another adversary and lures her to her death, decapitating her head and allowing children to play kick the can with it.

Speaking of kicking the can. She’s hard core by the end of the film, with a vengeance not seen by many of the “final girls” on this list. 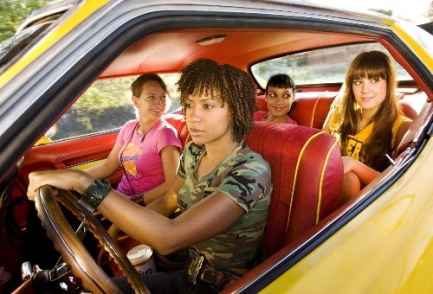 Quentin Tarantino is famous for his strong female leads—and his foot fetish, and a dozen other things! Let’s go back to the first one... Death Proof (2007) is one of two “grindhouse” films, the other of course being Planet Terror by Robert Rodriguez. These two films are throwback tributes to the old exploitation films popular in the 70’s, which were played in “grindhouse” theatres. 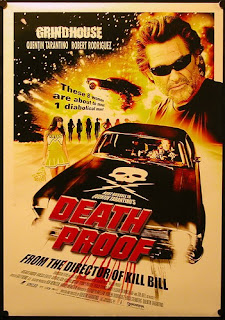 Death Proof stars the always wonderful Kurt Russell (The Thing, duh!) as Stuntman Mike, who is retired from his title but has kept a souvenir; his car. It’s death-proof—for him, that is. For the slew of lovely ladies that meet the skull-adorned hood, not so much.

Except for one solid crew of badass kicks comprised of Abernathy (Rosario Dawson, Sin City), Lee (Mary Elizabeth Winstead, The Thing), Kim (Tracie Thoms) and Zoe Bell as herself. They will chew a man up and spit them now, even if you are a psychopath who gets off on killin’ ladies.

This film may be a simple tale of vengeance, but damn is it satisfying! One of my favorite movies, I have seen it dozens of time and it never gets old, I am, of course, an enormous Tarantino fan and the director’s cut is the finest example of his brilliant script-writing. The film is obviously accompanied by a trademark killer soundtrack, so hang up the chick habit, boys, or these girls will getcha!
Posted by Christine Hadden at 2/10/2013

Very much agree with you on "Hostel 2," and you'll read why when I get to it on my list of my 100 Favorite Films. It is better than the original, and people tend to dismiss it without consideration simply because it's "Hostel."