Two of the finest performances in horror are in the spotlight today.  Tell us if you agree. 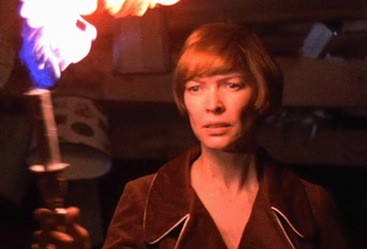 When Academy Award winning actress Ellen Burstyn took the role in The Exorcist, anyone doubting the film's legitimacy and quality no doubt squashed that apprehension immediately.

Her talent as an actress was already proven, so as Chris McNeill- the mother of a young daughter who may or may not be possessed by the devil - she was an excellent choice to make the film an even more veritable hit.

Normally, Linda Blair is the first actor people think of in The Exorcist.  But as good as Blair was as Regan, Burstyn was equally as commendable as her mother.  She brought a deep-seeded emotion to the part that would have been hard to come by if an unknown actress had been cast in the role.

I'm pretty sure everyone knows the story here.  Popular actress Chris McNeill is working in Georgetown and lives with her daughter Regan - who loves horses and apparently playing with Ouija boards by herself. Hmm.

When Regan starts exhibiting bizarre symptoms (like cursing and peeing on the floor in front of a room full of guests), Chris takes her to a doctor and has several series of tests run.  Nothing turns up from the tests and things get worse. So much worse that Burt Dennings, Chris's film director, is thrown out a window by Regan in one of her super-human strength episodes in which the bed shakes, the room is freezing, and Regan swears like a truck driver. 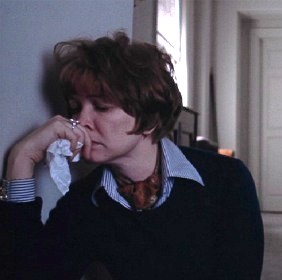 At this point Chris is at her wits end and goes to a priest for help. And so begins the exorcism, and the horrific hours spent trying to release the demon (who claims to be the devil himself) testing everyone's last nerve, most of all Chris.  What she goes through is something that no mother should ever have to deal with - and let's face it, no one does.

For a fictional character, Burstyn brings a realism to the character that is so credible - so human - that we feel every emotion she is going through as she fears for her daughter's very life. It's such an impressive performance that it was a no-brainer when she was again nominated for an Oscar (as well as a Golden Globe) for Best Actress for the role. And it remains one of my favorite performances in horror to this day. 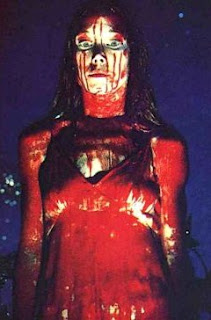 The upcoming remake’s tagline boasts, “You will know her name.” But hopefully, you already do—Carrie White.

Carrie, of course, started out as the 1974 novel by Stephen King and has gone on to have not one, but three screen adaptations, come this October. For me, I’m pretty sure there will always be just one, and that is the 1976 version brought to us by director Brian De Palma and starring the one and only Sissy Spacek.

Carrie White is a teenage girl who has just as much trouble fitting in as she does fading into the crowd. She is strange, shy, and extremely sheltered. The memorable opening scene is of gratuitous nude girls in the school locker room. Carrie White is crumpled in the corner of the shower, shrieking, her hands covered in blood. She is frightened and confused because her overprotective Christian mother didn’t inform her daughter that she would one day menstruate. Her all too understanding peers help her out by pelting her with pads and tampons—and that is just a dose of what Carrie White goes through on a daily basis. 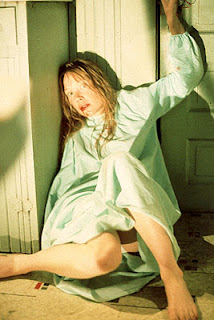 Whether it is at home or at school, her life is miserable. Her mother (Piper Laurie) constantly ridicules Carrie and punishes her by locking her in a closet filled with creepy crucified dolls. Another reason Carrie struggles to relate to the rest of her class (as if she needs any more) is the fact that puberty has blessed her with telekinesis.

Unbelievably, Sissy Spacek was 27 when played the role of teenage Carrie White, and had to do much persuading with the director to allow her the part. In the end, it seems she was the perfect choice; she captures awkward and often heartbreaking adolescence with perfection and was nominated for an Academy Award for Best Actress.

It is hard for us to really, completely sympathize with Carrie, however, because, well, she is a weird girl. We all knew a girl like Carrie White in our school, and we all most assuredly said some awful things about her. I find it hard to consider Carrie a protagonist either, for she is driven by humiliation and madness to do some horrible, horrible things. 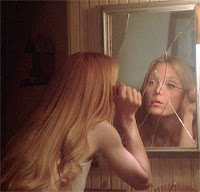 One reason I am angry at the casting of Chloe Grace Moretz in the upcoming remake is that I find it hard to believe that a girl like her could ever get picked on to the extent that her character does, whereas Sissy Spacek was (no offense) a weird looking girl. But alas, in this day and age it seems everyone is getting picked on. Maybe I should give Chloe a chance… NO, I REFUSE!

Every high school student faces some degree of ridicule, but Carrie is downright tormented. But the final prank is when a group of “popular” kids convince pretty boy Tommy (William Katt) to ask Carrie out to the prom and then humiliate her. What unfolds is a prom night to remember (if you survive) and one stellar, iconic performance from Sissy Spacek.

The Exorcist - The Best movie of all time!
Ellen Burstyn - The Perfect Actress!
Sissy Spacek - The Best Actress!
Sissy Spacek as Carrie, she's scared me half to death! Carrie scared me as a five year old. I'd like to see a Carrie who can scare the shit out of people. Bloodied and scared, the camera lingers on her face as she comes to terms with the devastating after effects of her school's prom party. She wasn't a monster. She was just a girl.
Sissy Spacek in an iconic image from Brian De Palma's horror film
Thank you for review!