Today we start our Women in Horror posts focusing on some of our favorite female performances. Once again, Marie and I are both going to choose seven of our favorite performances in horror, two for each day with a total of fourteen.  I have spotlighted female performances before, with several relevant posts over the last four years or so.  In fact in February 2010, I shone the spotlight on over 28 female villains in horror, so don't forget to check that out if you haven't already.

But I tried to pick different women to drop the spotlight on, which isn't really that hard because there are a ton of fabulous women out there doing exemplary work.

We're starting out with two of my picks, as Marie is a little under the weather. She'll be back later in the week, but for now I think you'll agree these two are currently giving consistently great horror television performances. 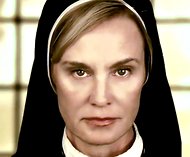 I had to start out with Jessica because I am just so in awe of her talent.  An Academy Award winning actress (Tootsie, Blue Sky), Lange started out in horror (and in acting in general) in 1976's King Kong.  And even though she's played women of all types in her career, I love her best when she's doing crazy (Frances, Blue Sky, Hush). And in American Horror Story, she does crazy so goddamned well.

In season one (a.k.a. American Horror Story: Murder House), Lange portrayed Constance Langdon, a suppressed housewife and neighbor to the Harmon family in the so-called Murder House. She comes over unannounced to the house on various occasions, spouting off words of wisdom in particular to Vivien Harmon (Connie Britton). 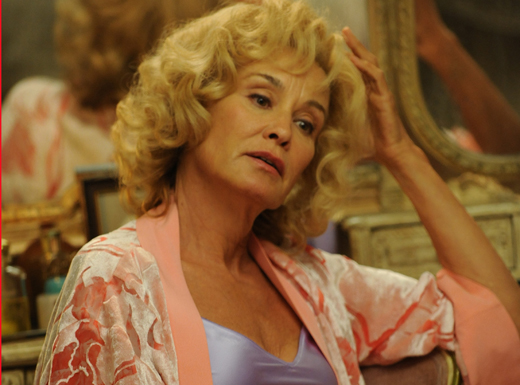 Constance has a daughter Addie (Jamie Brewer) who has Down syndrome and rather bad manners, and a son Tate (Evan Peters) - a disturbed teenager who we later find out (SPOILER ALERT) is responsible for shooting up his high school, and is actually dead.  He later rapes Vivien while wearing the infamous 'rubber suit'.

Constance is always consulting her psychic for advice, and is told Vivien is pregnant with twins, one of them being Tate's son and the future Anti-Christ.  Yikes.  How's that for a bumper sticker: "My grandson is the Anti-Christ!"

Constance makes life difficult for the Harmons over the course of the season, forever warning them that bad things happen to those inhabiting the house, and at the end actually ends up with one of Vivien's babies after she (and and one of the twins she was carrying) dies during childbirth. The series ends with Constance scolding her grandson for murdering his nanny.

Set in 1964 (as well as in present day), season two (American Horror Story: Asylum) has Lange playing Sister Jude, a nun in charge of Briarcliff Mental Institution.  This is where Lange shines even brighter than in the first season.  Sister Jude's cruelty is evident in the first several episodes, when she -among other ghastly deeds - commits a completely normal (non-psychotic) woman to the asylum just for being a lesbian. 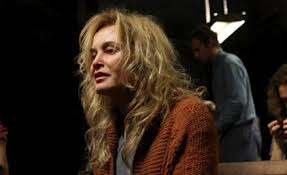 As the season progresses though, we see several layers to Sister Jude's character, all masterfully depicted by Lange. We see Sister Jude as Judy Martin, a woman destroyed by guilt for a past that included a young girl being killed by her reckless drunk driving.  She becomes a nun for this reason but after discovering that the girl really didn't die in the accident, seems to think that it was God's plan all along for her.  She then decides to set in motion a plan to eradicate the evil in the asylum, in particular a Nazi doctor, a corrupt and lecherous nun doing the devil's work, and the Monsignor trying to preserve the asylum's many secrets.  Unfortunately, Sister Jude is herself committed to the institution, and her collapse into mental oblivion is an utter joy to watch.

I really can't say enough about Lange's performances in the first two seasons of American Horror Story, and just knowing she will be starring in season three is enough to keep me up at night wondering about the brilliant possibilities.

For now though, I will have to be content to relive her fantastic success (she is the winner of multiple awards for her work on AHS, including a Golden Globe, SAG, and Emmy) by watching such clips as this one, with Sister Jude/Judy Martin in all her crazy, psychotic goodness: 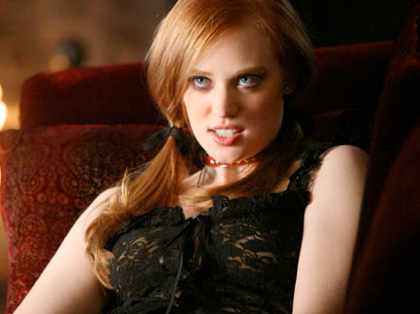 Somehow on True Blood, all the female focus seems to be on the ever-present Sookie Stackhouse.
And while I'll agree Sook is a fun character (and Anna Paquin does a fine job portraying her), I think there's another fantastic female that deserves more than a passing nod.

Deborah Ann Woll has been playing Jessica Hamby since 2008, when Jessica was added to the cast after Bill's punishment for killing another vampire resulting in him having to turn a human to a vampire to replenish their "stock", so to speak.

Only 17 when turned, Jessica had many lessons to learn after becoming a vampire, not the least of which was that she couldn't just bite anyone she wanted.  At first devastated by her new undead status, Jessica slowly turned a corner when Bill, as her maker, really took a special interest in her and treated her like a daughter - which is still their relationship to this day.  She quickly began to love her life as a vampire, seeing as how her previous life had her repressed and cowering to her God-fearing parents. Now there was no more church, no more rules, no more abusive father.  She was free to do whatever she wanted. Within reason, of course.  Enough of Bill's lingering humanity brushed off on Jess so that she was not too evil or too unapproachable. 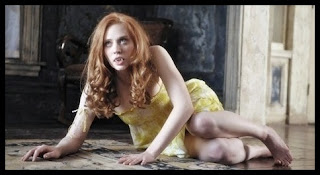 Woll's take on the Jessica character is a layered one, running the gamut of emotions.  Pleading for her life before Bill effectively killed her, her youth and innocence shown through, making it nearly impossible for Bill to continue with the change. But when she adjusts to her new life, she certainly has a lot of fun, throwing caution to the wind and letting out the sexy Jessica that was hidden up until then.

When she and Hoyt Fortenberry became a couple, we saw Jess try really hard to make it work. Attempting to live a "normal" life (her normal being making a hidey hole in their new home to sleep in, and having to cook food for Hoyt when she can't eat) took a lot out of their relationship, as they were always trying to overcome the obstacles of an inter-species love affair.  When it ended, it ended badly. 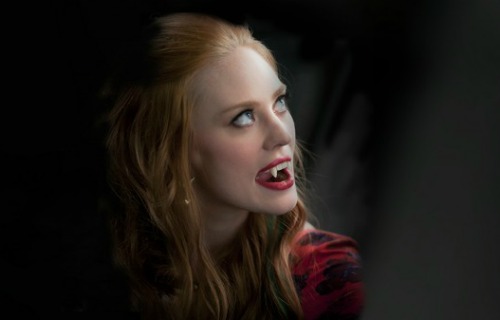 This past season saw Jessica at her most appealing and entertaining best.  Because Bill was made King of Louisiana after dispatching Queen Sophie-Anne, Jessica considers herself a sort of vampire royalty because she is his progeny and more like a daughter to him.

She has parties at the mansion, falls head over heels with Sookie's brother Jason, bonds with new vampire Tara then has a knock-down battle with her, learns vampire etiquette from Pam, and tries to make Bill understand that his infatuation with Lilith is bogus.

Jessica's character isn't even in the source material (the book series by Charlaine Harris), but in my opinion she is a refreshing addition to the True Blood world. She's sassy yet emotional, is completely captivating and let's face it, downright sexy!  I very much look forward to her work in the upcoming season of True Blood in June!
Posted by Christine Hadden at 2/17/2013

Thanks for sharing more post,Really i am impressed from it.
Great post can you share with me more post about it because i have many idea about this blog.