Today we highlight two vastly different women in horror. One is a naive, repressed housewife with a devil of a problem, the other a bold, goth chick heavy into witchcraft.  And oh hey, Marie is back! 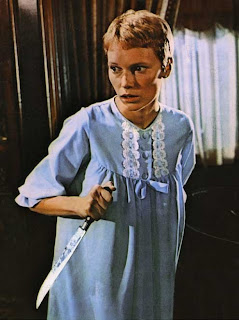 Roman Polanski’s Rosemary’s Baby is considered a classic not only to genre fans, but to all film lovers. Based on the bestselling novel of the same name by Ira Levin, the film was made only a year after the book was published, in 1968—a fad we are all too familiar with in this decade.

Rosemary’s Baby has not come to claim its legacy on its own, but with diligent help from the people involved in its creation: Ira Levin, for his beautiful storytelling, Roman Polanski, for his masterful filmmaking, and the actors for their compelling performance. One actor I would love to highlight is of course, Mia Farrow.

Miss Farrow was 22 at the time she played Rosemary Woodhouse, a young, charming housewife who is moving into a new apartment with her actor husband Guy (John Cassavetes). The couple quickly becomes reluctantly close with their neighbors Roman and Minnie Castevet (Sidney Blackmer and Ruth Gordon). In fact, they become involved in seemingly every aspect of their lives, including Rosemary’s pregnancy. Rosemary’s real suspicion understandably starts when she has a dream that she is bound to a table, surrounded by her husband and neighbors, and raped by the devil. She awakens to gruesome scratches all over her body and a sketchy husband who admits to having his way with her in her sleep. The result is a pregnancy filled with strange home remedies, a secretive doctor, and many other clues that lead Rosemary to believe she is not in control of her life. 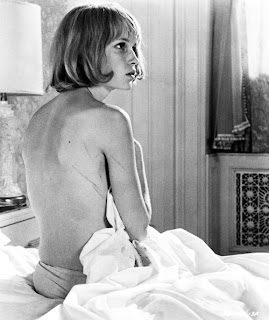 Mia Farrow received several nominations for her role, made iconic by her strawberry blonde pixie haircut. Farrow gave this performance her all (she even bares her ladybits in the disturbing rape scene) even though she was going through a crumbling marriage during filming. She was at the time married to Frank Sinatra, who demanded that she quit filming of Rosemary’s Baby to instead act in his film, The Dectective. She, of course, refused, and Sinatra filed for divorce.

The performance Farrow gives in Rosemary’s Baby is an unforgettable one; the character she brings to life is real and genuine, that of an ordinary woman put through hell. The Rosemary we know at the start of the movie is a bit naïve and submissive, happy to live under her husband and not to question much about daily life. It is not until she finds her life closing in around her that she snaps out of her housewife haze and began to really (as she should) freak out.

What Rosemary is being put through is more than unsettling, it is downright evil, and with paranoia rising and a mind unraveling, right before she reaches the brink of insanity, Rosemary finds the will to grab the biggest kitchen knife she can and get to the bottom of this mystery…

Rosemary Woodhouse’s character is a bit similar to another we see in Polanski’s “Apartment Trilogy”; that of Carole in 1965 Repulsion. It is another terrifying example of a woman losing grip on her mind, but I feel that Rosemary is a much more personable character, one we really deeply feel and fear for. 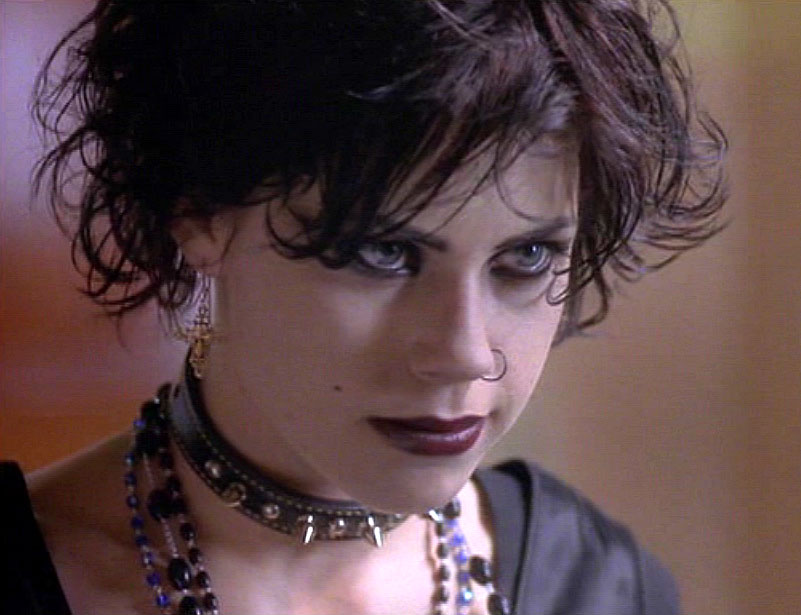 Quite honestly, I've been waiting forever to highlight Fairuza.  She's just so damn excellent in The Craft, even though the film is meant to be a vehicle for Robin Tunney and also gives us a pre-Scream Neve Campbell.

Her Nancy is just a crazy, power-hungry teenager from the wrong side of the tracks who dabbles a little too dangerously into the world of witchcraft, but she's so good at it that we almost want her to succeed in her wacky deviousness.

I've seen Balk in other films (most notably for me, a supporting role in American History X), but her memorable turn as Nancy is as impressive as it is demented.  Nancy and her two BFF's are looking for a "fourth" to complete their circle - a group of witches that worship 'Manon" - when they happen upon Sarah (Tunney) and invite her to join.  Sarah however, is a natural witch and her and Nancy eventually clash due in part to Nancy's jealousy of Sarah's power from within. The girls participate in a ritual called "invoking the spirit", which is generally saved for only very experienced witches. It causes Nancy to have a bit of a breakdown, after which she acts completely insane and becomes even more unglued. 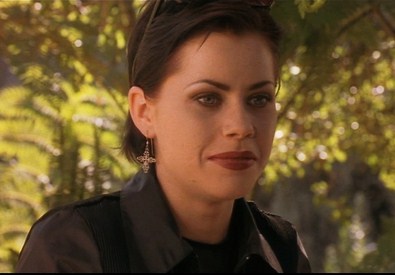 This causes a huge rift and an eventual showdown between the girls, with Nancy going bat-shit crazy on Sarah, warning her outright that when a witch leaves her coven they kill her. She causes Sarah to have terrifying dreams and illusions, filled with snakes and bugs. Her envy of Sarah's boyfriend (a boy Nancy had eyes for) causes her to make him fall out a window to his death.  When Sarah tries to bind Nancy's powers, Nancy counters with an illusion that makes Sarah think her parents were killed in a plane crash.

As far as I'm concerned,  even though eventually Sarah gets the upper hand and retaliates, Nancy has already left an overwhelming impression on me and is the highlight of the movie.  She plays crazy so damn well and in this film, with her goth look and unbalanced personality she is sort of sad - yet mad as a hatter at the end. 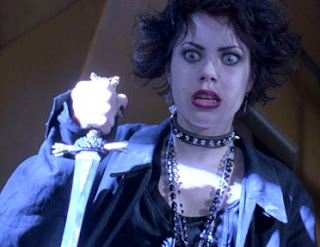 Balk plays the stereotypical witchy persona perfectly, going over the top when needed, but reining it in at just the right moment - like when we realize Nancy is utter white trash, living in a broken down trailer with an alcoholic, foolhardy mother and a step-father that just wants to look under her skirt.  It's obvious she's depressed and wants to change her life, with witchcraft being the catalyst between her real life and the life she aspires to have, in which she is in total control.

But seriously, it's just thoroughly entertaining to watch her at work, selling us crazy in all its glory.  It's a sight to behold: