Well, better late than never. Here's our final day of Favorite Female Roles in Horror!  Two of our favorites. Hope they are yours, as well. 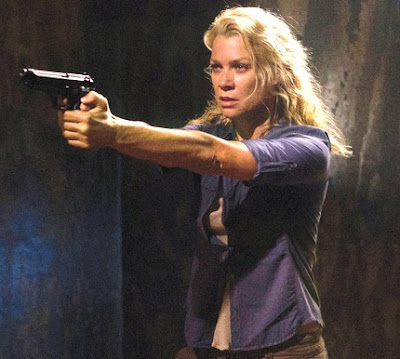 Genre fans should be pretty familiar by now with Laurie Holden's work.  She spent several seasons in the  memorable recurring part of  government informant Marita Covarrubias on The X-Files and co-starred in both Silent Hill (2006) and The Mist (2007).  But for me, she's really come into her own with her role as Andrea on The Walking Dead.

A civil-rights lawyer, Andrea has been on the show since the second episode and has shown us many sides to her personality. After her younger sister is bitten by a walker, Andrea holds her in her arms until she dies, then shoots her the moment she reanimates.  Soon after, Andrea decides to take her own life by staying on at the CDC when she knows the building is set to blow up.  Her friend Dale convinces her not to commit suicide, and though she's mentally exhausted by the whole experience, she becomes hardened and quickly evolves into one of the toughest people (male or female) on the show. 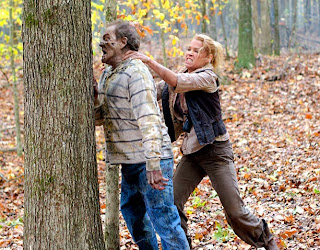 When the group's safe haven farm house is overrun by walkers one night, Andrea is mistakenly thought of as dead, and the rest of the group leaves her behind.  She escapes into the woods and spends several days running and hiding out from walkers.  She meets a walker face to face and just as she is no-doubt seeing her life flash before her eyes she is rescued by Michonne, with whom she develops a tight bond. 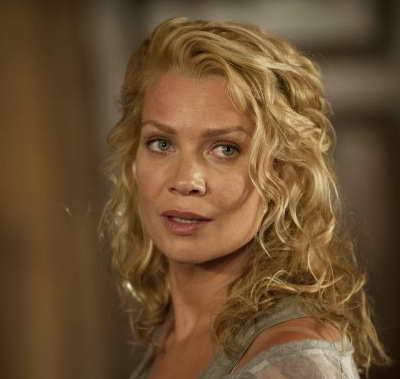 Months later, the bond between the two tough women is put to the test when they end up at a community called Woodbury and Andrea starts a relationship with their leader - aptly known as The Governor.

As of now on the series, Andrea's loyalties are tested when she realizes the group that left her behind at the farmhouse are indeed still alive, living right up the road at the prison, and that they have essentially become the enemy of her current lover.

Holden is a terrific actress and a crucial part of the cast of The Walking Dead.  She projects a very strong female persona, with guts and bravery that exceeds most of the others in the group.  It's awesome that there is such a spirited, female character on TWD, but even better that it is played by an actress with such formidable acting chops! 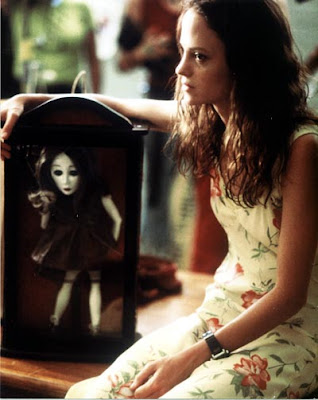 I know this is my second post this week about a Lucky McKee film, but what can I say, I like the guy! This time I’ll be talking about his 2002 film May and, more specifically, star Angela Bettis.

Bettis plays titular character May, a girl who grew up isolated from everyone because of an eye patch covering her lazy eye. Her strange mother only added to this isolation by giving her a doll, telling her that this will be her best friend with the added advice, “If you can’t find a friend, make one.”

So May grows up talking to a doll, and boy, does it do wonders for her social skills. Although May tries in vain to make relationships with people who assure her that they enjoy “the weird”, May proves to be too strange for them and they push her away. After May’s porcelain friend Suzie is destroyed, she will go to any length to make her own friend.

Angela Bettis is extremely convincing as the strange and misunderstood May. You feel the sting of each prolonged awkward interaction, and the tension rising as she is denied by those who at first accepted her. Just like the glass encasing her silent friend Suzie, May begins to crack… 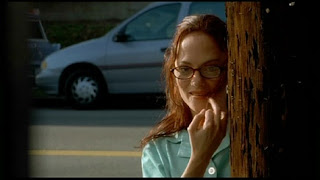 Angela Bettis is an established genre actress and isn’t afraid to take on challenging and unconventional roles, often those of emotionally disturbed women. In the same year she played May she was also Carrie White in the David Carson remake. She is also a favorite of director McKee; she’s featured in other films of his such as Sick Girl, The Woods, and The Woman.

In the film May’s sexuality isn’t necessarily defined by gender, but she does have a repressed bloodlust that she is desperate to indulge in. She thinks she finds the perfect match in her horror-obsessed crush Adam (Jeremy Sisto), but he’s not as hardcore as he seems, and gets disgusted when May tries to kiss his bleeding lips. Her other lover, Polly (Anna Farris), is willing to indulge in a little playtime, but only until it is too late, and May has cracked, and is looking to quench her thirst. 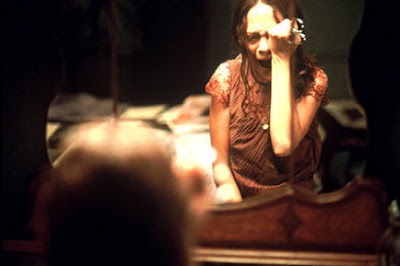 When all is said and done, May is just a lonely girl who was been alienated by her peers her entire life because of a physical different. The only person she can find understanding in is inanimate, and the people she chooses to give herself to just happen to be douche bags. In the end she will do anything to have a friend, so she uses her pent up frustration and sewing skills to make one.

On top of acting, Bettis also produces and directs film on occasion. In 2006 she directed Roman, a film written by Lucky McKee that is described by the pair as the reverse gender version of May. The roles of two are even reversed as Angela Bettis directs and McKee plays the lead role of a socially disturbed man who has an infatuation with a stranger. Bettis also directed a portion of the ambitious upcoming anthology, The ABC’s of Death.
Posted by Christine Hadden at 2/23/2013