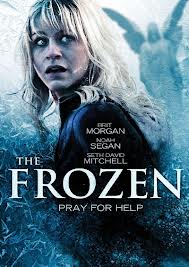 First of all, this is NOT the movie about the three snowboarders trapped on a ski lift.  That is simply Frozen.  What we have here is THE Frozen.  Apparently when you stick a the on the front of it, it changes things up.  Implies that something or someone is actually frozen. However, if I'm recollecting correctly, no one actually froze to death in this film.
Anyway...whatever.

And before I give up the details on the actual film, I have to mention that it took me DAYS to recall where I'd seen the leading lady, Brit Morgan, before. And then it hit me! Wham! Brit Morgan played Debbie Pelt on True Blood.  For some reason all I can think of is her exclaiming "They killed my Cooter!" when Alcide shot her redneck trailer-trash werewolf boyfriend.

Emma and Mike (Seth David Mitchell)are preparing for a camping trip in the dead of winter.  Just before they leave Emma is checking a pregnancy test in the bathroom and guess what?  She's eating for two, folks.  She doesn't tell her boyfriend before they leave, and to be honest she sure doesn't seem to be too excited about it.  He tries to pacify her by telling her they will go somewhere warm next time. 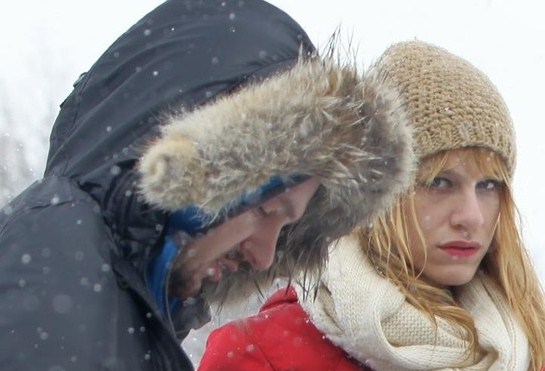 They end up at an obscure location in which they have to park the truck and take the snowmobile ten miles into the wilderness to set up camp. I'd have to seriously reconsider a boyfriend that didn't even rent a damn cabin and made me sleep in a tent in the freezing woods.  After learning that Mike has never even driven a snowmobile, it isn't surprising when they crash the thing and end up stranded miles from their car. And of course it starts to snow, so they can't even follow the sled's tracks back out of the woods.  Neither of them are injured very badly (Emma has bumped her head, but they seem no worse for wear) so after Mike is unable to fix the snowmobile they realize they will have to spend the night anyway.

Setting up camp, the two start a bickering session that ends up with Emma blurting out that she's pregnant.  When she doesn't get the reaction she was expecting (or perhaps hoping for), she tells him she's not keeping it anyway and that pretty much ends that topic and the rest of the day's conversation. It's painfully obvious that the two may have underlying relationship problems before even coming on this trip.

Like The Blair Witch Project before it, The Frozen does emote an incredible 'lost in the woods' vibe that is heightened ten-fold by the fact that it is freezing cold, snowing, and growing quite dark and ominous.  Before laying down camp, they run into an abandoned campsite in which several dead, gutted deer are hanging, which Mike blows off and Emma freaks out about.  When she sees a stranger (Noah Segan) in the woods while Mike is off getting firewood she tries to get his attention, only to lose him in the snowstorm.

After a relatively uneventful first night, the couple's nerves are rattled and fragile when they can't seem to get going in the right direction, and are constantly quarreling about Mike's lack of helpful skills and Emma's delicate condition.  That second evening is a pivotal one for both the audience and our characters.  Once Mike also sees the stranger in the woods (who completely ignores them when they call out to him), he goes after him - and doesn't return.

This is the best part of the film, when we witness Emma's survival -and maternal- instincts kick in. She realizes she doesn't want to lose her baby and finds herself against the odds with both the weather and her mind, which starts playing tricks on her.  She's sure she hears someone sneaking around outside the tent, but when she goes outside, thinking it could be Mike, she sees a woman walking in the woods in the distance. She calls out to her but the woman doesn't stop.

After walking in circles and starting to run out of food, Emma starts to panic but because of her pregnancy she makes a vow to get out of her predicament, despite being far from cell phone service, being low on supplies, and it's still snowing. Add to this the creepy-as-hell nighttime woods and more than a few sightings of people lurking in the woods and you have a perfect recipe for misfortune.  There are some elements in the final third of the film which may be somewhat confusing, and I'm not entirely sure they were for the good of the movie, but I can't fault it too much, as Morgan's acting is solid enough to carry it and make it believable. 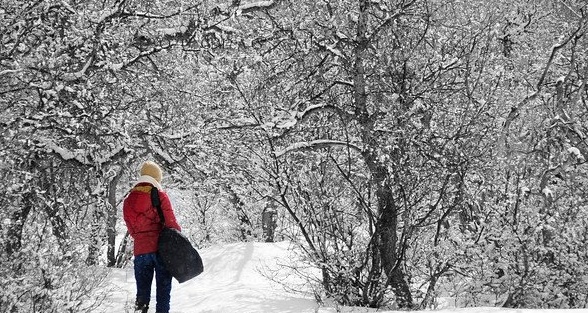 The Frozen, while not opening any new doors in the genre, is a capable film with very good acting by Brit Morgan - and enough mysterious moments including a semi-twist ending that make this a decent thriller.  Being lost in the woods would be scary enough, but adding in all these factors - snow, no food, the possibility of being hunted - as well as utterly lost - well, there's a lot of dread to go around.
I'll be interested in seeing what filmmaker Andrew Hyatt has in store for us next...

Oooh Debbie Pelt... she has the weirdest body. This movie sounds creepy as hell though! I'm gonna check it.