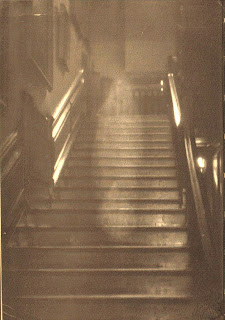 Today we are going to explore the various hues (ok, maybe not fifty!) that ghosts supposedly come in. For whatever reason, they’re all female apparitions. These “ladies” are a very interesting part of folklore, and maybe even creepy enough to keep you up tonight.

There’s a good chance you’ve seen the famous photograph of the Brown Lady. This three hundred year-old ghost who haunts Raynham Hall in Norfolk, England was allegedly captured by the lens of Indra Shira and Captain Hubert C. Provand in 1936.

In life, the Brown Lady was believed to be Lady Dorothy Townshend, sister of the first prime minister in England (Sir Robert Walpole), and legend has it that her husband locked her up until her untimely death. A portrait of Dorothy Townshend used to hang in Raynham Hall—it depicted a woman in a brown dress with big, bright eyes. Apparently when you walked by the picture at night the face took on an evil expression.

The ghost of the Brown Lady has made several notable appearances since the 1800’s. She appeared in the room of George IV, staring at him as he lay in bed; and to Captain Frederick Marryat when he attended a ball at the house. She manifested in the hallway, glowering at him, frightening him so badly he pulled out his revolver and shot it. But the bullet, of course, passed right through and was later discovered lodged in the door behind her.

The photograph, which shows a foggy white figure floating in front of a staircase, was published in Country Life Magazine in the year it was taken and became instantly famous. It remains to be one of the most well known spirit photographs, and has yet to be explained.

This particular name exists in ghostlore for women who died in tragedy or murder—specifically noblewomen. They are most popular in Britain, where they are said to roam within castles and about the grounds, and at times they are seen clasping a cup of poison in their hands. There are countless white lady stories in the United Kingdom, but perhaps my favorite I’ve heard is about the white lady of Darwen, a small town in Lancashire. She is said to haunt her gravestone; she wanders about the cemetery at night, and the eyes on the stone figurine of her grave are said to open when they are touched.

Tales of white ladies exist in multiple different cultures, and their quirks vary a bit from place to place. For example, in France white ladies are often found near bridges, where young women were often thrown to the river in sacrifice to the spirits, given safe crossing of the bridge in return.

Similar to white ladies, grey ladies are the ghosts of women who died under violent or tragic circumstances, although specifically when it was caused by a loved one. Their name comes from the idea that they are normally seen wearing grey. Glamis Castle in Scotland is haunted by a grey lady, who inhabits the chapel; the caretakers have even reserved the pew where she is often found sitting.

Chambercombe Manor in North Devon, England has the ghost of a grey lady dating back to the seventeenth century. The story goes that a man named William Oatley guided a ship to the shore one night, and purposefully made it crash into the rocks so that he could plunder it. A woman washed ashore, her face so badly damaged that no features remained, and her took her home. She died later that night, and Oatley stole her jewelry and money. It was the next day that Oatley was told that his daughter had disappeared during the shipwreck, and out of the grief and shame from accidentally murdering her, Oatley hid her body in a wall of the manor. Her body was believed to be found a hundred years later, but her heart-broken ghost still lingers. 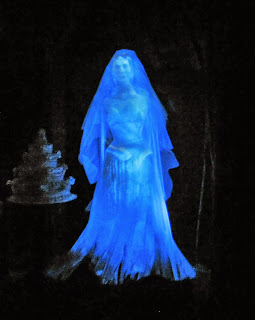 The Blue Lady is a mysterious ghost of a woman who haunts Moss Beach Distillery in California. Legend tells of a woman who was always seen wearing blue. She met a dashing man while vacationing on the coast, but was killed by her jealous husband when he found out about her affair.

Not only has a strange figure in blue been seen wandering up and down the beach—sometimes with bloodstained clothes—but other peculiar events have been reported at the Distillery, such as eerie phone calls from seemingly no one and women’s jewelry going missing.

Unfortunately, whatever credibility the restaurant had was stamped out by SyFy’s Ghost Hunters, who discovered several planted scares around the Distillery.

One last ghostly woman I’ll tell you about is a spectre of local lore. Here in my hometown of St. Louis, Missouri we have what is widely considered one of the most haunted places in America—the Lemp Mansion. Family home of the beer barons of the early 1900’s, their rich lifestyle was brought to an abrupt end with Prohibition. After the closing of their brewery and the death of William Lemp’s son (one of seven), Frederick, from a heart attack. Shortly after, William shot himself in the mansion’s marble office, where his son, William Jr, would also take his own life. Two more of William Lemp’s children would later commit suicide in the mansion, but most of the family members are thought to still haunt the house.

One ghost in particular is daughter Lillian Lemp, who, in life, was nicknamed “the Lavender Lady” for she often wore purple. Now she is often seen in front of her portrait on the staircase, and in the room she once occupied, where you can sleep… if you dare!
Posted by Christine Hadden at 10/25/2013