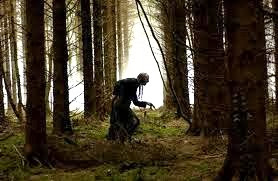 While I have already written about Shrooms many years ago, I don't think I ever touched on the fact that it is most certainly a guilty pleasure. I mean, a film about a group of people going to Ireland to find a mushroom that will provide them with hours of psychedelic fun doesn't exactly seem like it could function as a horror movie, does it?
But in this particular case, it does.

Tara and her friends are taking a break from college and travel to Ireland to hang out with Jake, a local who knows just where to find the right kind of mushroom to pick and have fun with later. He takes them foraging through the dark Irish woodlands, and (of course) they split up to do some shroom-searching! Even though Jake has explained the difference between good and bad fungi, Tara mistakes a deathcap mushroom for an edible one and consumes it.  She has very bad reaction (natch) and it culminates with the ability to have frightening, violent premonitions that appear to predict the future.

To make matters worse, the group ends up camping near the ruins of an old orphanage, which naturally boasts a very dark past. Jake knows the ghastly legend and scares the shit out of the group as they hang out in the evening around the campfire. Combine this with the psychedelic tea they made with their mushroom stash and what you get is a bunch of college kinds who are high as kites and scared to death. Wonderful combination. When they start dying one by one, it's as confusing for the audience as it is the movie characters.

What works about this film is that you can't be sure if the mushrooms are causing bad dreams and visions or if the violence that we are seeing is actually happening.  Add to that the whole horrific legend of the children's home, and you've got a lot to be scared by.  The lines between reality and the imagined are blurred here, and though I think that is what the director was trying to achieve, in the process it can be a befuddling mess, and I therefore understand the disdain the film has acquired.
But the imagery here is really astounding. The creepiness of the dark woods, made even more unsettling by throwing in the ominous legend of the children's home, and the fact that it is a foreign country for most of the students - it just feels tense and disconcerting.  And hey, any film with a talking cow is alright by me! 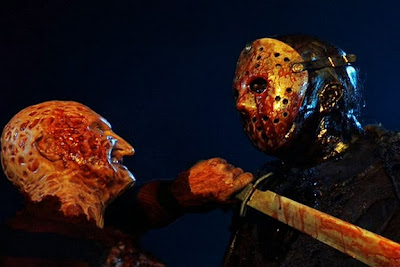 And Marie's pick:
FREDDY VS. JASON

My siblings are all 10+ years older than me, so while I should have been watching Disney and Pixar flicks I was climbing up on the couch with them to watch slasher films. Essentially, I have them to thank for this unhealthy horror obsession I have today. I was introduced to a variety of unsavory characters at a young, impressionable age but two stuck with me. Jason Voorhees and Freddy Krueger. Put them in a movie together, how am I NOT supposed to like it?

In 2003 it had been 9 years since the last Freddy Krueger film; needless to say the people of Elm Street had just about forgotten about that weird guy who kills people. Meanwhile, Freddy’s getting super bored in Hell and wants to come back and terrorize the town. The best plan he can come up with is to awaken Jason Voorhees and convince him to get the party started and then he can return once they remember ol’ Freddy.
“Versus” movies are extremely cheesy, and most of the time they are fucking awful. I’m not saying Freddy vs. Jason is an exception to that, but I am obviously partial to it given my blood-splattered childhood. At the same time I also genuinely, unabashedly enjoy this piece of shit. 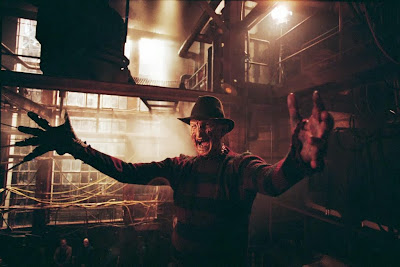 Freddy Krueger is known for his laughably bad dialogue, and it didn’t get any better in 2003. A kill in a Nightmare on Elm Street film isn’t complete without a one-liner from Freddy. As I mention in my article on Urban Legend, if a movie has Robert Englund in it, I’m pretty much sold. He came back to play his iconic role at age 56!! How awesome is that?!

Freddy vs. Jason is riddled with flat characters, gratuitous sex and unnecessary violence but sometimes it is okay to indulge in something awful. It is also perfectly okay to enjoy yourself while doing so, as long as you know what you’re doing is wrong. I know that watching this movie is almost like committing a crime against humanity, but Freddy vs. Jason is so awesome that I just don’t care.