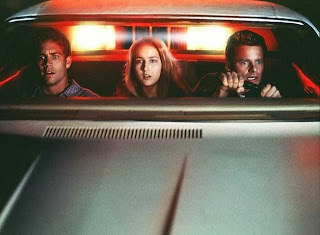 These next two weeks, Marie and I have decided to each take a whole week and highlight another specific theme. My week is first, and I give you: Road Trip Horror.

Ahh, the road trip.  A peaceful getaway to the mountains. A jaunt from city to city on business. A drive cross country just for the fun of it.  An escape by two lovers for some quiet time. A vacation with family. A road trip with friends to celebrate the holidays....  It's always fun to get away. Right?

Maybe not.  Road trips can wreak havoc on every last nerve in your brain. Traveling with friends, family, and/or loved ones can put undue pressure on even the calmest of folks.  But throw in a maniacal killer or a begrudged motorist and you're pretty much doomed.

So.
Who hasn't pulled what they thought was an innocent prank and found out later that it meant more to your victim than meets the eye?  We've all done stupid things in our past.  Hell, some of us might be doing foolish things right now.  But when a prank has devastating consequences, it's more than we bargained for and we're ill prepared for the repercussions.

Just as Lewis (Paul Walker) is about to fly home from college for the summer, he chats with Venna (Leelee Sobieski), a crush of his that he is trying to strike up a relationship with.  She tells him about her recent break-up and lack of a ride home for summer break, which of course sparks an idea.  He sells his airline ticket and buys a piece of crap car, telling her he is driving cross country and will pick her up - no problem at all!

On his way to meet Venna, he gets a call from his mother telling him that his delinquent brother Fuller (Steve Zahn) has been released from prison. When he sidetracks to pick him up from jail, Fuller decides it would be a great idea to hitch that ride home with Lewis and take some more flak from the parents for all the shit he's gotten himself into.  Somewhat reluctantly, Lewis agrees. 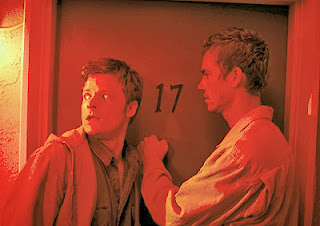 At a gas station/truck stop, Fuller buys an old CB, much to the chagrin of Lewis.  Soon they begin engaging in some harmless banter with a mysterious truck driver known only by his handle: Rusty Nail.  Doing his best impression of a sexy female trucker, Lewis jump starts Rusty Nail's libido by hinting at a possible interlude at an upcoming motel stop. As "Candy Cane", Lewis lures the trucker to room 17, one room down from the room of the two brothers. Upon check in to room 18, Lewis and Fuller have a brief run-in with a ridiculously rude businessman, who secures the actual room 17.

The prank goes all wrong when they hear Rusty Nail wake the businessman by knocking on motel room number 17.  The brothers hear a nasty argument and attack next door and find out the following morning that the businessman is in the hospital on life support due to wounds from a violent beating.

And so continues the road trip from hell.  Once on the highway again, Fuller and Lewis hear Rusty Nail over the airwaves, asking for Candy Cane.  The boys fess up to the prank, but somebody isn't taking it so well.  When they pick up Venna, things only get worse, and what started out as a joke has them running for their lives from the deranged trucker. 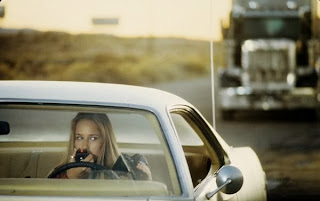 Who hasn't played a stupid joke on someone, not really meaning anything by it?  We all have, right?  Well this film certainly shows you what can happen when the tables are turned. Lewis and Fuller become the hunted, forced to play along with Rusty Nail and his very warped sense of humor, which only gets worse as the days go on.  Even as they try to escape the crazed killer, he keeps ratcheting up the terror, always seeming to be one step ahead of the trio. The silliest of counterplay (having the brothers walk naked into a truck stop and order cheeseburgers) turns into the scariest of retributions when first Venna's friend is kidnapped, then Venna herself becomes victimized, all to get a rise out of the two brothers.

Equal parts The Hitcher and Duel, Joyride is a tense outing, with some humor sprinkled in here and there. The cast is very engaging, and the evil trucker becomes quite malevolent in the end. It's obvious he's come completely undone, set upon vengeance for the silly prank that made him look a little stupid.  Some folks just can't take a joke. 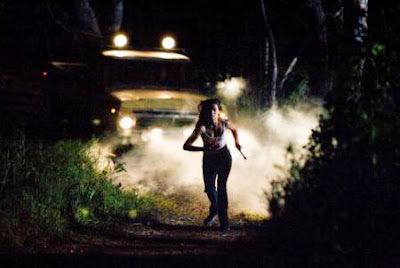 MORE ROAD TRIP HORROR:  The much maligned Rest Stop, which I have previously reviewed HERE, is another example of bad shit happening when you hit the road.  In this case Nicole is a young woman who is heading off to California with her boyfriend, Jess. They stop off for some quick nookie (witnessed by a creep in a yellow pick-up truck) and then head to the nearest roadside rest to take care of other business.

When Nicole returns to the car, she finds Jess gone.  After looking around thoroughly she starts to panic, which is pretty much the correct expression, as the deranged idiot in the yellow pick up truck drives by and throws Jess's cell phone at her and speeds off.

And so begins Nicole's never-ending nightmare as the truck driver keeps coming back to the rest stop to attempt to kill her. The film is certainly no prize (probably why it is a "Mindless Movie Monday" addition), but it's worth mentioning because there is no doubt all of us have stopped off at a less than sanitary rest area at least once in our lives.  And we never think about anything bad happening there.... Maybe we should.
Posted by Christine Hadden at 10/14/2013