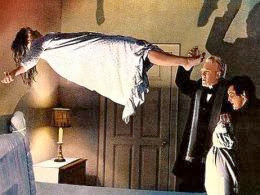 Behind every good ghost story there is… another ghost story! Some of the greatest spine-tingling supernatural films are tied to allegedly haunted places. It’s nearly Halloween, the perfect time to let your morbid curiosity get the best of you, so read on…

I’m sure you are all aware that William Friedkin’s 1973 classic, The Exorcist is based on the “true story” of a possessed boy. I won’t go through the whole story, it’s strewn across a thousand pages on the Internet, but I do want to highlight one of the famous haunts associated with the macabre tale.

The boy—who to this day remains nameless—was from Maryland but moved with his parents to St. Louis to be with relatives as his affliction (believed to be demonic possession) worsened. The exorcism, performed by Father Raymond Bishop, was conducted at St. Louis University hospital (SLU), and later at the Alexian Brothers Hospital, where it ended. Father Bishop kept a detailed and disturbing diary of the events that passed, and hid it in a locked desk drawer in the hospital. The wing of the hospital where the exorcism was performed, and in which the diary was secured, was used for the treatment of severally mentally ill patients. The wing later had to be demolished; the demolition crew found the diary and turned it into the building administrator, and the rest is history.

Now people claim that before the wing was demolished, that infamous room held the hospital staff in terror. Claims of cold spots, screams, smells, and apparitions are told by the ear-full; but alas, now the old hospital has been turned into apartments. Even so, it is a proud bit of haunted history from my hometown, and it doesn’t make it any less fun to drive your out-of-town friends by the spot, point, and say, “That’s where it happened!”

This enormous luxury hotel in Estes Park, Colorado was the inspiration for Stephen King’s 1977 novel The Shining. Why? Because King, himself, had several ghostly experiences there!

When the famous author stayed there with his wife, they were given room 217. Change the one to a three and you’ve got the scariest room in the Overlook Hotel. It is claimed that King and his wife set down their bags in the room and left the better part of an hour. When they returned, their clothes were put neatly away and their luggage stacked in the closet.

The most haunted floor in the Stanley is the fourth floor. It is there that several ghost children, particularly a girl and boy who are often seen together, play up and down the halls. Stephen King allegedly saw the wee spectres, providing the inspiration for the creepiest set of twins in movie history. Sometimes a red ball is found rolling down the hall, as if it was being tossed between two children. 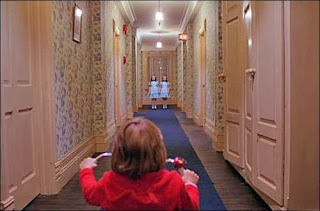 Another ghost is that of a homeless woman who sought shelter under the concert hall, but froze to death. Now she is seen and heard around the area where she died, looking for warmth. The original owner, Mrs. Stanley can sometimes be heard playing the piano. Apparently it is difficult for housekeepers to keep the rooms clean, as unseen entities are constantly going in after them and tossing lamps to the floor and yanking pictures off the walls.

So far the elevators have not erupted with blood and the topiary animals have not come to life, so if you choose to visit the Stanley Hotel you should only have some slight spiritual disturbances. Unless, of course, they decide to dig up their pet cemetery. 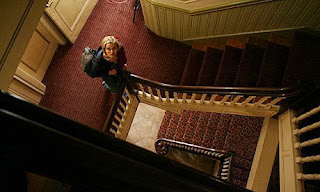 Why are hotels so creepy? You can’t claim that the movies made them creepy, because the ghost stories existed before the films did! Torrington, Connecticut hotel Yankee Pedlar Inn is not only one of the oldest running hotels in the state, but it is also the setting of horror director Ti West’s spooky 2011 film The Innkeepers. Shot on location, West and his cast members had a few off-book experiences.

West became interested in the supposedly haunted inn (West, himself, is a skeptic), and was even spoon-fed a good many by one of the inn’s night clerks, Luke Edwards, who would become a model for West’s character—Luke (Pat Healy). The cast and crew slept at the Yankee Pedlar while filming, and they admitted to be unsettled by their set.

The Yankee Pedlar was originally the Conley Inn, opened in 1891 by Irish immigrants Frank and Alice Conley. After their death, the hotel changed ownership several times, and it wasn’t dubbed “the Yankee Pedlar” until 1956. The Innkeepers star ghost, Madeline O’Malley was inspired by the rumored lingering spirit of Alice Conley, who died in room 353 (although not by any gruesome means). Mrs. Conley is said to set her favorite chair a-rocking, and Mr. Conley has been reportedly seen in the inn’s pub (where else would a dead Irishman go?).

Bizarre dreams are another common experience when staying overnight at the Yankee Pedlar Inn; even Ti West was afflicted. If you decide to stay there, I think your safest bet is to stay out of the basement!
Posted by Christine Hadden at 10/24/2013