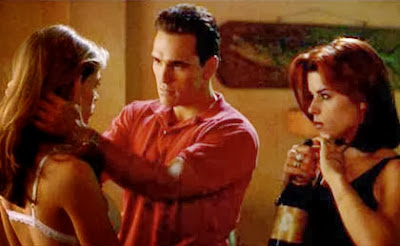 People who know me know I love Kevin Bacon, and have seen most everything he's been in. Including this swarmy little thriller from 1998.

Truth be told, the story line here is pretty tight, with several endings within an ending that gives us twists and turns throughout the film and multiple questions that seemingly go unanswered until the very end.

Its guilty pleasure status, I believe, comes from the blatant sexuality the film unfolds - including a ménage à trois and full frontal male nudity. But I love this movie! 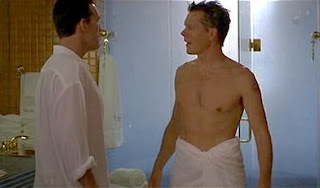 Sam Lombardo (Matt Dillon) is a high school guidance counselor who finds himself in trouble with the law after being accused of the rape of two different (very different) young ladies. Trailer-trash Suzie (Neve Campbell) and uppity rich-bitch Kelly (Denise Richards) later admit to framing Mr. Lombardo to exact revenge for wrongdoings that have affected each girl. Only later do we find out that the two girls and Lombardo were working together to extort a settlement from Kelly's very wealthy mother. That's where the naked partying starts.

Enter Detective Ray Duquette (Kevin Bacon) who smells a sham a mile away. He begins to investigate the "crime" and finds himself embroiled in the deception and subterfuge of the case. As Lombardo's lawyer Kenneth Bowden (the always hilarious Bill Murray), entangles himself as well, what we get is a big mess of a narrative that is as compelling as it is bewildering.

And really...who doesn't want to see Kevin Bacon, finally out of that god-awful blue speedo from Friday the 13th? 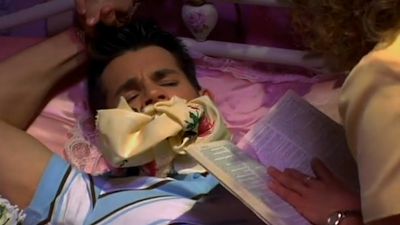 And Marie's pick: THE GAY BED AND BREAKFAST OF TERROR

One such film for me is The Gay Bed and Breakfast of Terror (2007). Yeah, that’s actual title of the movie, and boy is it terrible.

This extremely low-budget indie film by Jaymes Thompson (who?) is about five different couples that are all in town for the biggest party of the year. Unfortunately, they all forget to make reservations so the lot of them ends up at a creepy, isolated bed and breakfast run by a Margaret White-like Bible-thumping woman and her sexually repressed daughter. Little do the new tenants know just how deep their hostess’ prejudice runs, until they begin to drop like flies—when they’re not hooking up, of course.

Oh yeah, and I won’t forget to mention the weird half-slug, half-human child named Manfred that they keep in the attic. That’s the best part! 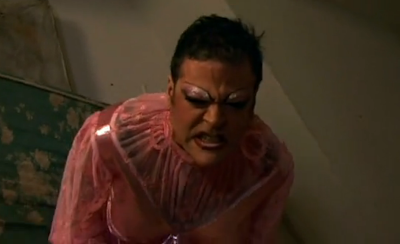 You can probably imagine just how bad this movie is without me telling you, but the 110 minute travesty to filmmaking consists of all the elements I ran down in my introduction: shit script, acting, sets, cinematography, and a half-assed plot that is distracted by all the film’s unnecessary sex scenes.

But don’t you for a second forget that I’m writing about this film because I enjoy it. I rented it from Blockbuster because of the ridiculous title and ended up having a night full of riotous laughter when I showed it to my friends. Honestly, I’ll show it to whoever will watch it because it is just so damn hilarious.

A redeeming quality of The Gay Bed and Breakfast of Terror is its self-awareness. The filmmakers had to have known they were making a ridiculous movie, and they probably had a really fun time doing it, which makes it that much easier for you to have fun watching it.

You can be a serious horror fan and still love the goofy, campy ridiculous genre films that are out there. I watch so many brutal, violent films that sometimes I need a break! That’s when I pop in The Gay Bed and Breakfast of Terror.
Posted by Christine Hadden at 10/03/2013

Are you telling me that you see Kevin Bacon's dick in "Wild Things"?

Kevin Bacon's wang kind of traumatized me for life but I just avert my eyes whenever that moment comes on screen. Gosh, Wild Things is so ridiculously appealing when it probably shouldn't be. Kind of like Showgirls.