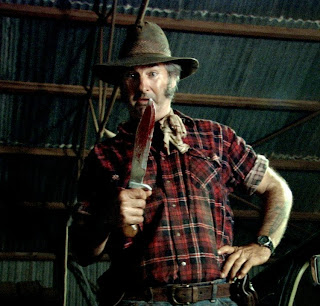 Wolf Creek  is a brutal film from 2005 that explores all that can go wrong when you put your lives in the hands of a stranger.  I doubt anyone who saw it would have any desire to head to the Australian outback for a "walkabout" any time soon.

The true events the film claims to be based on happened back in the summer of 2001 when a man and his girlfriend were assaulted and abducted by one Bradley John Murdock, an Australian now serving life in prison for the murder of said backpacker Peter Falconio, whose body has still never been found.

The first fifteen to twenty minutes of Wolf Creek  have you wondering when something is going to actually happen, but the wait is painfully worth it.  Two women, Brits Liz Hunter (Cassandra Magrath) and Kristy Earl (Kestie Morassi) join their Aussie buddy Ben Mitchell (Nathan Phillips) on a backpacking trip in the Australian outback (which seems like a really bad idea, from all the films I've seen). They end up driving up to a national park, Wolf Creek, where there is a huge crater that was formed by a meteorite. This interests them, so they stop off to see the novelty of it. Perhaps unrelated, Ben and Liz finally express their previously held-back feelings by exchanging a kiss. Ahh, things appear to be going swimmingly for our trio!

Until they notice that for some reason their watches are all broken and their car won't start (aliens??). They seem in quite a bind until help shows up by way of a typical Aussie fellow, aptly named Mick, who offers to fix their vehicle but then alarms them by telling them it's worse than he thought. HOWEVER...he can repair it! All they need do is let him tow them back to his humble abode where he has some parts and will fix them up toot sweet!  Why sure! And they're off. 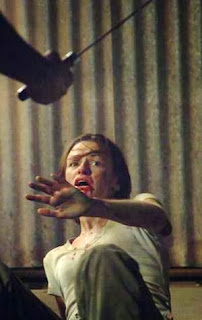 Back at Mick's (slightly frightening) remote home, they sit 'round the campfire and he chats them up about various subjects, all the while drugging the water he offers them. When Liz awakes she is tied up in a shed, and after breaking free she discovers Mick torturing Kristy, and no sign of Ben at all.

Wolf Creek is a stark reminder of the dangers of accepting help, even in the form of a friendly enough looking gent.  Granted their options were limited, and most of us would likely have done the same thing. But as they say in Pet Sematary..sometimes, dead is better.

In the film, a chilling portrayal of evil personified is given by John Jarrett, playing Mick Taylor.  His seemingly friendly persona is quickly destroyed when we see him pull out a giant knife.  There are signs, of course, that he is one fry short of a happy meal, but in the end there was probably no escape from his wrath.  The Australian outback is one of the most dangerous places on earth - just from the conditions and wild creatures that could be your end - let alone a psychopath with a big knife and a bad attitude.  Stay home, people.  Or at least get a decent, reliable car.

For your enjoyment, another round (Wolf Creek 2 ) is apparently hitting the big screen in early 2014.
Did we learn nothing about foreign travel?

Hostel  (2005) may not be considered typical road trip horror, as most think of being in a car when they think road trip, but three friends traveling across Europe more than qualifies. I've written a bit about this film in the past, and you can check that out HERE.

Pax (Jay Hernandez) and Josh (Derek Richardson) hook up with Oli in Europe and begin their tour of bedding as many ladies as humanly possible across the continent.  When they hear of beautiful women in Slovakia that are just waiting for someone to jump their bones, they jump on the train and head to the hostel that will be their downfall. 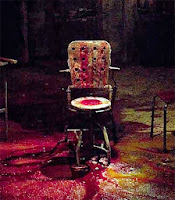 But while it is basically a film that focuses on torture, it's also a not-so-friendly reminder of the dangers of world travel.  These boys just throw all caution to the wind and follow the call of their dicks. Putting trust in total strangers puts them smack in the middle of a ring of kidnappers who sell their victims to the highest bidder to do with whatever they so choose. Which ends up a disturbing, bloody mess.

Traveling in other countries can be frightening enough without worrying about being kidnapped or killed by foreigners. It's not easy to extricate yourself from those kinds of situations, and most likely you end up dead... or a head on a stick.
Posted by Christine Hadden at 10/16/2013