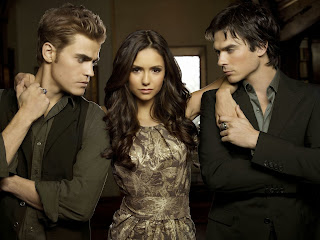 For our final Guilty Pleasure, Marie and I have chosen to go to the small screen to pick a fave from there.

My choice is a show I've been watching for several years now, THE VAMPIRE DIARIES.

Though decidedly different than the Twilight films, TVD is based on a book series for teenage youngsters as well. Only in this particular vampire story, the vampires actually have fangs and use them on a regular basis. They are also much cooler than the vegetarian vamps from the teeny bopper flicks as well. They might brood and get emo once in a while, but they look so much better doing it.  And they aren't worried that their next meal might be a squirrel, either. 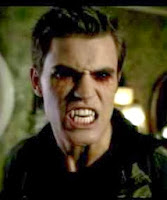 Stefan (Paul Wesley) and Damon (Ian Somerhalder) Salvatore are two brothers who were turned into vampires during Civil War times and have returned to their roots in Mystic Falls, Virginia, to live among the humans. Naturally they both fall in love with the same girl, one Elena Gilbert (Nina Dobrev) who happens to be a doppelganger for Katherine (Katerina) Petrova (Dobrev in a dual-role) - the very same vampire who changed the two siblings over 150 years ago. Much sex and chaos ensues.

This series had me at Damon. The beautiful Ian Somerhalder (LOST) is captivating to watch and always has a smart-ass remark (and a glass of whiskey) at hand. The rest of the cast is great as well, with supernatural creatures of many varieties (witches, vampires, werewolves, ghosts, etc.) wreaking havoc in a small town setting.

I'd say it's a guilty pleasure because it's geared towards teens (though admittedly many of the cast are over 30) and is meant to entice the Twilight crowd to something a little less prosaic - with a little more meat on its bones and a lot less drivel.

The series has been running since 2009, and this year spins off another series entitled The Originals, which stars many of the family of "original" (read: malevolent ancients) vampires from TVD. It's supposed to be a little more adult, a little more nasty, and a lot more spooky - and with its New Orleans set it's bound to do so. 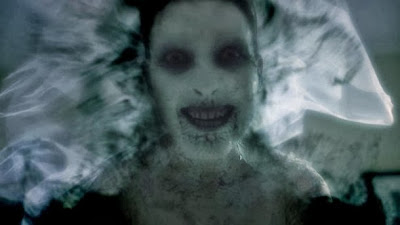 Yes, I believe in “ghosts” and an assortment of other paranormal activity. What I love most about ghosts though is that they come with stories. Nothing gets me off more than a ghost story, especially if it is a “real” one. I love first-hand accounts because it is storytelling in its traditional form. Some people, however, aren’t the greatest storytellers, and need a little help to bring their spoken images to life. Which brings me to my real confession…

I love paranormal drama-documentaries It’s a mouthful, but that’s not the reason I don’t normally admit this out-loud—it’s because it is pretty embarrassing. Perhaps you’ve seen what I’m talking about, for there’s a few. There’s a Discovery Channel series called A Haunting, there’s one on Animal Planet called The Haunted, but my favorite is hosted by Syfy—Paranormal Witness.

So the gist of these types of shows is that they bring on someone (usually a family) who claims to have had a real paranormal experience. The storyteller is situated interview-style in front of some dark, unmoving backdrop and the camera is set to a fixed angle while the storyteller narrates, leaving the fourth wall intact. Mixed in with the telling of their tale are dramatizations that follow their descriptions. 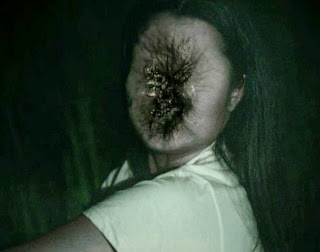 The reason these are my guilty pleasure is that the dramatizations are often really cheesy; bad acting, poor special effects, the works. Even still, I love them! The less-than-frightening acted-out versions of these ghost stories are not enough to stop me from enjoy a good, first-hand accounted ghost story.

Paranormal Witness is my favorite because I find it to be the most effective of all the ones I’ve seen. Although it is still pretty hit-or-miss, I’ve seen some episodes where they create some genuine tension, instill some real fear, and really bring these stories to life. There are currently three seasons and a few of my favorite episodes are “The Cabin/Ghost in the Garden” (Season 2), “Haunted Highway/Kentucky UFO Chase” (Season 1), and “Emily the Imaginary Friend/The Lost Girl” (Season 1).

If you find yourself curious to watch Paranormal Witness, the first season is available on Netflix.
Posted by Christine Hadden at 10/06/2013