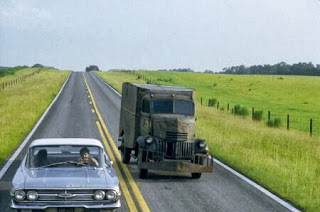 One of the better horror films to come out of the 2000's was Victor Salva's Jeepers Creepers (2001).  It may be slightly underrated, but as I see it, it has a lot going for it by way of originality, a creepy monster/villain, and decent acting by the two leads.  It stalls out in the last act a bit, but it delivers some real thrills in the first half of the movie.  Certainly one of the more entertaining road-trip horror films out there.

Darry and Trish are traveling home from college on a long stretch of deserted road, playing your average stupid car games and endlessly picking on each other. The relationship between the two siblings is really one of the highlights of the film, as they really have a hilarious bickering session that everyone with a brother or sister can relate to! As they are driving, a crazed driver in a rusty, big old truck flies up on their ass and tries to run them off the road, madly honking its horn. 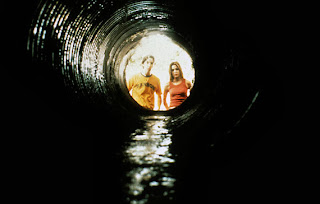 After scaring the living shit out of Darry & Trish, they gather their senses and continue on. Rattled, Trish recalls the story of a teenage couple that went missing along the same stretch of road and they were never found.  As they reminisce about the unsettling story, they drive past an old abandoned church where they see the truck stopped. They slow down and are appalled to see someone in a long trench coat dumping what could only be a body, wrapped in a sheet, down a large pipe adjacent to the church.  The driver does take note of them watching him, and soon is on their heels trying to run them off the road again.  He manages to accomplish it this time, and flies past them honking the horn as their car settles along the side of the road.

Soon Darry begins to question Trish about returning to the church.  His conscious won't let him ignore the fact that someone could be in danger or near death. There was no mistaking what they saw, and with that rationalization the two end up looking down the pipe to see what they can find.  Unfortunately, due to basic brain malfunction, Darry falls down the pipe.  What he discovers down there is beyond all comprehension.

Up to this point, it's all pretty exciting. Where the film fails is when other people start to enter the picture, such as the local police (who are just about as laughable as you'd expect), an absurd psychic who has visions of the future, and a crazy cat lady who really doesn't belong in the film at all - her inclusion is merely filler, though it's always nice to see (the late) Eileen Brennan. 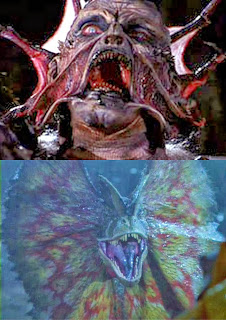 All this is before you really even see the "creeper" driving the rusty truck, who is a piece of work all by himself.  It's hard to say just exactly what the creeper is. Suffice it to say he's an aberrant monster - looking something like the Dilophosaurus from Jurassic Park with John Jarratt's Wolf Creek hat.  His looks are not the strangest thing about him, however.  What remains one of the more bizarre monster quirks in horror is that the Creeper only feeds every 23 years, and fact is: he can smell your fear!  Ok, seriously!

Regardless, the film is to be commended for the fear factor it evokes in the first part of the movie. Darry and Trish are a typical pair of siblings and their fear is palpable as they traverse down this highway of death, and the Creeper is genuinely terrifying as he tries to run them off the road.  There are many other moments that frighten, including the 'down the pipe' scene, a few minutes in a cornfield, and the tense, unsettling feeling that Darry and Trish get when the Creeper has just rooted through their vehicle when they stop at a diner to call for help.

If you can get past the less than stellar ending, Jeepers Creepers is a fun, original flick that is among the best of the road-horror offerings out there. 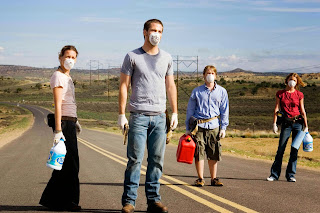 Tales of apocalyptic horror seem to be a dime a dozen lately, and Carriers feels like a cross between 28 Days Later, The Road (2009), and TV's The Walking Dead.  While we are not specifically talking zombies here, the ruins of the world depicted here are similar without a doubt.

The world has already been decimated by a pandemic of epic proportions.  Traveling to the beach they knew and loved as kids, Brian (Chris Pine) and Danny (Lou Taylor Pucci) grab up their girlfriends Bobby (Piper Perabo) and Kate (Emily Van Camp) and try to weave through a sea of infected victims they encounter along the way. Subsequently, they meet Frank (Christopher Meloni) and his daughter Jodie (Kiernan Shipka), who is very ill.  Fate compels them to combine forces and so the group keeps going until they stop off at a school where a supposed cure is available. 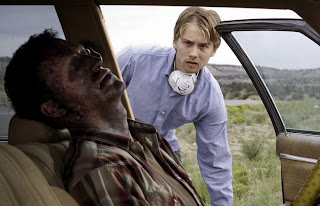 Naturally, things go awry on this road trip, leaving more infected than not, and the search for an exit from all the agony and death seems unattainable for much of the film.  For this reason Carriers seems extraordinarily bleak, even for apocalyptic horror.  You can't get a sense of everything turning out all right like you do with some films, so I can imagine for some people it would be either boring or too morose.

But the acting here is quite satisfactory, despite a sparse script.  Pine is good, but his meek brother played by Pucci is actually the better of the two. Chris Meloni as a heartbroken and desperate dad is admirable, and you will be wishing for a happy ending for him and his little girl - which all along you know is not going to happen. 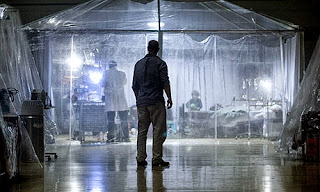 By all accounts a very grim road movie, the further our group gets down the road they get to the beach, the more progressive their problems seem to get.
Soon, there is no accounting for morals or manners or even loyalty as the group fights among themselves and others.
Their disillusionment in mankind, as well as for an actual cure to the disease, is ever-apparent, making for a depressing yet compelling character study.

Perhaps little seen, Carriers is one to watch, as long as you're not in a despondent mood...because this is NOT going to facilitate happiness.