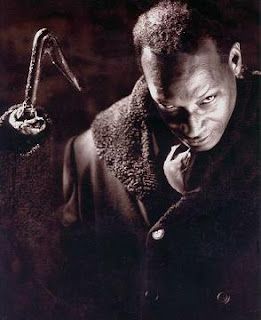 Marie and I are utterly fascinated by these tales that we have all grown up with, be it the story about the dreaded ghostly hitchhiker or the legend of the drugged-out babysitter who puts the baby in the oven instead of the turkey.  These tales have all been passed down from generation to generation, some of which you will swear are true! After all, didn't you hear it from a friend of a friend? Or around the campfire at summer camp? Or at that slumber party you went to with your sister?

There is a comfy little niche in American folklore that these urban tales fit into, and whether or not you believe they actually happened (because some of them you'll swear are true) is part of the stigma of the legends in the first place.  And the horror genre has taken many of these stories and turned them into feature-length films. That is where our focus lies here, on the movies that are directly related to urban legends. 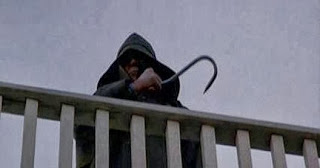 First up, one of the most familiar urban legends known. The Hook.

The story goes like this: A boy and his girl are out parking late at night in a remote location. They are just starting to get busy when the music on the radio stops and a radio announcer comes on with a desperate warning about an escaped convict from a local asylum possibly being in the area. His most distinguishing feature is the fact that he has a hook for a hand.  Naturally the girl freaks out and wants to go home, and despite many kisses and much urging to stay, the boy reluctantly takes the girl home. Upon dropping her off, she gets out of the car and starts screaming. When the boy runs to her side of the car what does he see?  A bloody hook dangling from the door handle!

There are a lot of adaptations with this story, one of which also involves a couple parking and an escaped, hook-handed lunatic on the prowl, only this time the car won't start and the boy decides to go for help. While waiting, the girl hears a tree branch scraping along the roof, back and forth...back and forth... until she has been waiting so long she begins to worry. She gets out of the car and to her horror discovers her boyfriend hanging from a tree, gutted like a fish by said hook. It's his shoes that make the scraping noise on the roof. 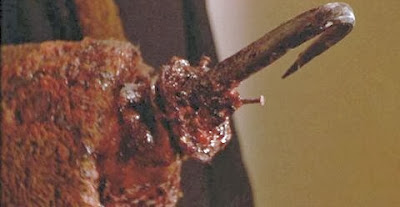 Whatever incarnation you may have heard, one thing is clear: the villain is demented man with a hook for a hand. When we look to horror films to find the story of the hook-handed murderer, we needn't look too far.

In the 1997 film, I Know What You Did Last Summer, a group of teens are menaced by a vengeful fisherman in a dark slicker with a hook for a weapon.  While he does not have the hook for a hand, another film puts a more literal spin on the urban legend: Candyman.

Candyman moves the hook-handed antagonist out of back-roads suburbia and into the land of urban decay. Clive Barker weaves an entire twisted story around our anti-hero, making Candyman the victim of a horrible crime of bigotry and racial violence.  Candyman grew up the son of a former slave who had made his fortune and by all accounts was an aspiring painter with a bright future. But money and societal privilege meant nothing when he got a rich white man's daughter pregnant. The girl's father and his friends tortured Candyman, cutting off his painting hand and shoving a hook in its place. They then covered him in honey and set forth hundreds of bees to sting him to death. Not a pleasant end. And a perfect reason to come back from the dead for bloody revenge.

The kills in Candyman are gut-wrenching, as for most he just rips his hook through the victim's innards and takes care of business quickly.  The bloody stump from which the hook protrudes is the stuff of nightmares, and its easy to see where Barker possibly got his inspiration...the legend of the hook-man, realized in film. 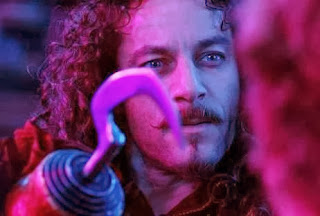 But let's remember we don't even have to stay in the horror genre to have a hook-handed villain. In J.M. Barrie's 1911 novel, Peter Pan: or, The Boy Who Wouldn't Grow Up, we have ourselves a scoundrel of the highest proportions, one Captain Hook.  A terrible pirate who lost his hand to a crocodile and replaced it with a frightful hook. And to think that story was written for children!  But to this day, many a Halloween Costume turns out to be within the pirate theme, complete with that nasty hook.

Lemony Snicket's A Series of Unfortunate Events book series also has a hook-handed villain named Fernald, albeit he is missing both his hands and has hooks to replace them. So it's obvious that the hook-handed villains have been around a very long time.

On a side note, Candyman very efficiently uses yet another urban legend, the tale of Bloody Mary, in which a ghost will appear in a mirror if its name is said the required amount of times. In Candyman's case, it is five. Say his name five times and he will appear behind you in the mirror, his bloody stump at hand (sorry, couldn't resist).