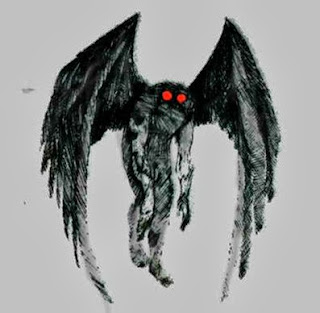 The legend of the Mothman starts where all great stories should: in a cemetery. On November 12th, 1966 five gravediggers in West Virginia saw a large, humanoid figure flying low to the ground. This was the first sighting of the mysterious creature now known as The Mothman.

The Mothman is usually depicted as a man-sized creature with enormous white wings and glowing red eyes. Shortly after the first sighting, a startling number of people in the town of Point Pleasant, West Virginia. Nearly a year 46 people died due to the sudden collapse of the Silver Bridge in Point Pleasant. There’s a theory that the Mothman was an omen of the disaster, or perhaps even the cause of it. In 1975 author John Keel wrote The Mothman Prophecies, which is his own theories on the Mothman sightings and the Silver Bridge tragedy, suggesting that the Mothman is from outer space.

The book was the inspiration for the 2002 film of the same name directed by Mark Pellington. Richard Gere stars as journalist John Klein who begins an investigation of the Mothman after encountering the creature in a car accident that resulted in the death of his wife (Debra Messing).

The Mothman has made appearances on televisions shows such as Syfy’s Unexplained Files, X-Testers, The Lost Tapes, and even an episode of The X-Files. Syfy also had an original movie titled Mothman in 2010, in which the legend, himself, targets a group of friends who accidentally murdered one of their own while exploring the Point Pleasant mythical monster as teens. The Mothman has also been the subject of two documentary pieces, both released in 2011—Eyes of the Mothman and Mothman Country. As far as non-fiction literature goes, John Keel wrote another book about the Mothman entitled The Eighth Tower, which further explores his radical ideas of the paranormal. Other authors such as Loren Coleman (Mothman and Other Curious Encounters), Gray Barker (The Silver Bridge), Andrew Colvin (The Mothman’s Photographer), Donnie Sergent Jr. (Mothman: The Facts Behind the Legend), and even more have explored the “truth” behind the foreboding cryptid. Point Pleasant by Jen Archer Wood, Dark Wings by John J. Rust, and Perverted Communion by Steve Ressel are all examples of novelizations based on the legend of the Mothman.

Point Pleasant has come to embrace their macabre legend; they have a 12-foot stainless steel statue of the beast, a museum, and an annual festival named after the Mothman.

The UK has its own sort of version the Mothman, called the Owlman. However, the first sighting of this winged creature was first seen in 1976, ten years after the original Mothman sighting, therefore solidifying Mothman’s status as O.G.
Posted by Christine Hadden at 10/13/2013